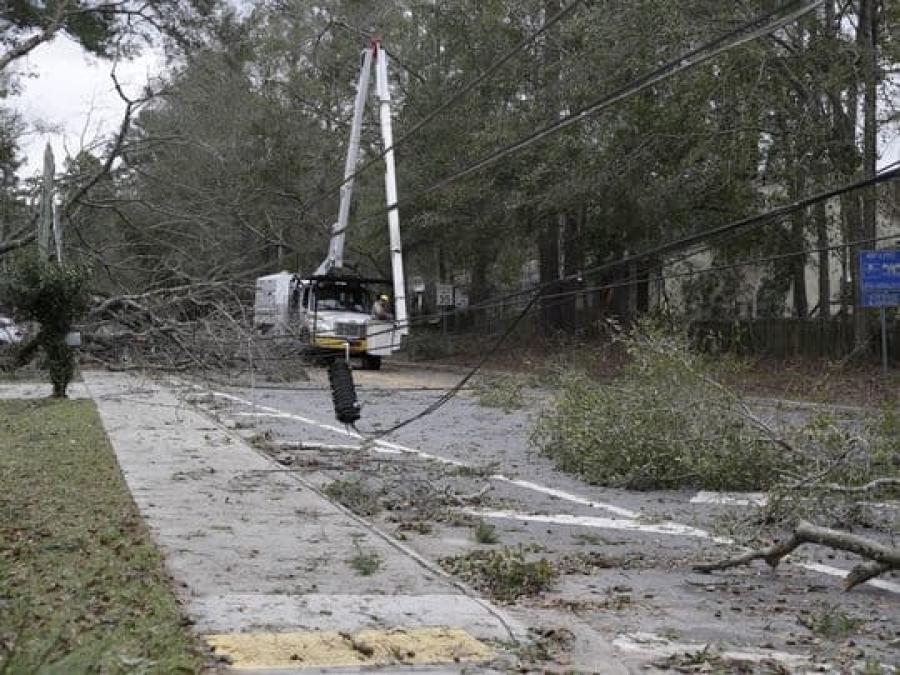 Sunday's heavy storms left behind a mini-Hermine scale of destruction and served as a reminder of the Tallahassee electrical grid's vulnerability to high winds and fallen limbs.

The storms also gave officials a chance to see if any of the improvements they made to communicating with customers helped.

Spawned by a massive tornado system that swept through the Southern U.S., the storms took three of the city's 25 substations completely out of service and left 30,000 customers without power, Deputy City Manager Reese Goad said.

The substations were all on the east side: Substation 21 on Miccosukee Road, Substation 17 off of Mahan Road east of Interstate 10, and Substation 14 off Centerville Road north of Capital Circle NE.

“That's where we saw the bulk of the damage,” Goad said.

Up to 70 mph winds knocked down trees and power lines, leaving 30,000 of the utility's 118,000 customers without power. Power was restored to 23,000 by Monday morning, with 98 percent recovery expected by midnight Monday. The rest are expected to be completed overnight and into Tuesday, if necessary, Goad said.

The storms drew immediate comparisons to Hurricane Hermine, which blew through Tallahassee on Sept 1 with 55-64 mph winds, knocking eight substations offline and causing power outages to 100,000 homes and businesses. It took a week to restore power to 90 percent of the customers.

As with Hermine, the damage to the electrical grid Sunday was tree-related. “Trees enter the wires running from the substations and ultimately trip the stations offline until repairs can be made in each of those lines,” Goad said.

And once again, the parts of the city hit hardest were around the medical corridor, midtown and Indian Head Acres.

The impact was shorter in duration but just as intense, Goad said.

For example, the storms revisited the area around Miccosukee and Fleischmann roads with heavy damage to power lines and poles. “We rebuilt all of that after Hermine and it was destroyed again,” Goad said. “They are rebuilding it from the ground up.”

After Hurricane Hermine city and county officials discussed plans to improve communications with the public and coordinate with state officials post-storm.

The city kept customers updated via text message and email of progress getting power restored, and used Facebook and Twitter to let people know where line crews were working.

“The mayor and governor had a good conversation enlisting the state in road clearing," said Commissioner Gil Ziffer, who was among those commissioners updating the public on Facebook.

Another recommendation was to upgrade the outage map in order to keep up with the demand. It was disabled Sunday.

The Sunday storms also underscored the need to implement three other recommendations made to the city commission at a recent workshop — creating an urban forest master plan, expanding a tree-trimming pilot program, and putting strategic power lines underground.

The commission has also asked staff to come back with an idea of how much it would cost to bury power lines underground in strategic areas.

“Trees are a big reason people live here, but when they're in an area where they are continually causing problems we need to be looking at going underground where it's feasible,” Ziffer said.

Putting lines underground can relieve some of that initial impact to get critical services up and running again, Goad said. But it also would be expensive. Burying electrical lines in the five-mile medical corridor would cost an estimated $10 million, according to Goad.

The City Commission has already approved a project to build a backup generator at Substation 12, which supplies power to both the Tallahassee Police Department and Tallahassee Memorial HealthCare.

“Construction could begin this summer and take a year to complete,” Goad said. “It will serve the hospital and the surrounding area.”