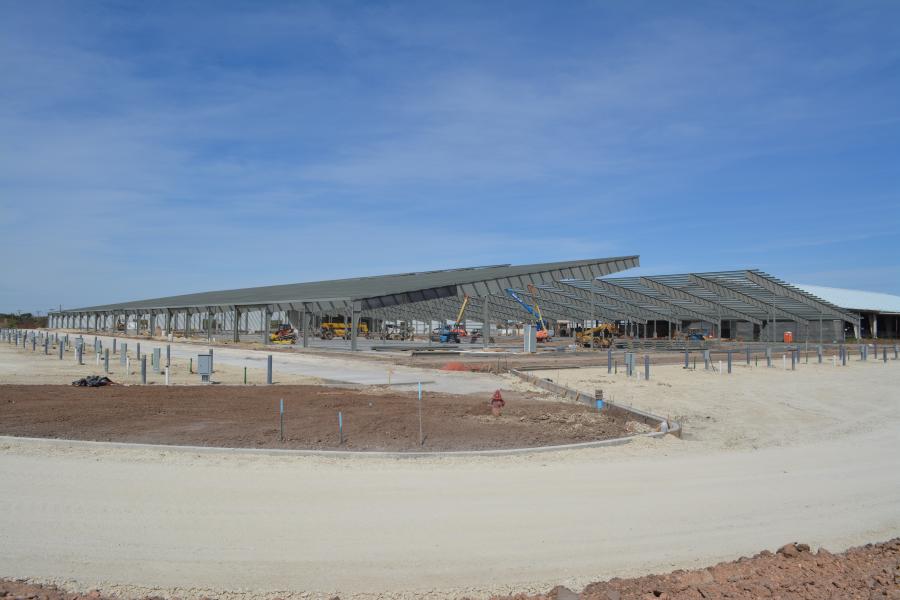 The new livestock building at the Taylor County Expo Center during construction at the Abilene site.

T&T Earth Movers Inc. is nearing completion of work at the new livestock building at the Taylor County Expo Center in Abilene, Texas.

T&T has been responsible for all site demolition, dirt moving, concrete work and asphalt paving on the project. Lee Lewis Construction Inc. is the general contractor.

The expo center's outdoor arena is being renovated and improvements will include 168 new livestock stalls and a 300-yard-long building built to house 800 stalls, a rodeo arena, concession stand and veterinary and show offices, according to Rochelle Johnson, executive vice president and general manager of the Expo Center.

Additionally, 190 RV stalls are being built around the perimeter of the facility.

Terry Suarez, owner of T&T, said that his company moved more than 27,000 cu. yds. of dirt during the site preparation and brought in approximately 17,000 cu. yds. of base for the asphalt paving that followed.

The project, three hours away from T&T's yard in Seminole, created some logistical challenges for Suarez' team.

“Definitely the biggest challenge we had was working around the other trades,” he said. “Scheduling our employees and equipment and never being sure the other trades were where they needed to be, was a lot to consider. In the end, though, we all want to make money, so the various contractors worked well together to get the job done.”

T&T used mostly Caterpillar equipment on the site, including a D6TXL and D6K dozer and a 950H loader. All of the company's grading machines are equipped with SITECH grade control technology.

“Grade control makes our people better operators,” Suarez said. “Our seasoned people like it because there is a lot less in and out of the machine. The time savings are also huge. Twelve hours of setting blue tops turns into 30 minutes of setting benchmarks.”

T&T completed the RV stalls and concrete work in early April and is scheduled to return in mid-May to begin asphalt paving of the facility's parking lots.

The arena work is part of the $55 million overall project for the Expo Center, made possible by a bond approved by Taylor County voters in July 2017.