T&T Salvage to Remove Shipwreck Off Coast of Georgia 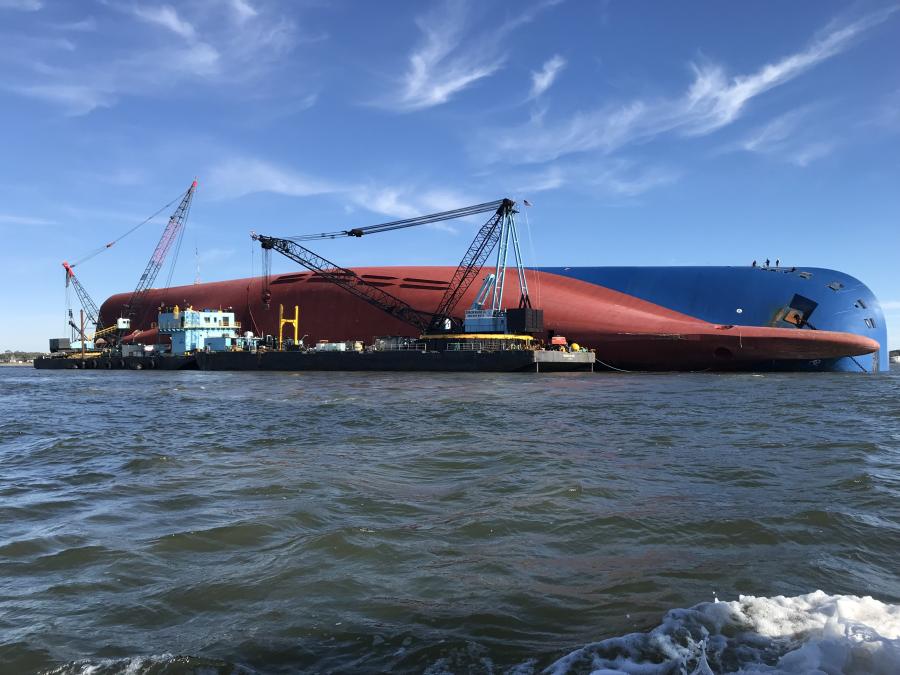 Crews onboard the work barges Farrell (L) and Columbia (R) work to clean residual fuel oil from tanks inside the capsized Golden Ray.

On Sept. 8, 2019, the Baltimore-bound Golden Ray cargo ship capsized near the Port of Brunswick while heading out to sea off the coast of Georgia. The 656-ft. car carrier was transporting 4,200 vehicles on its way the Middle East. 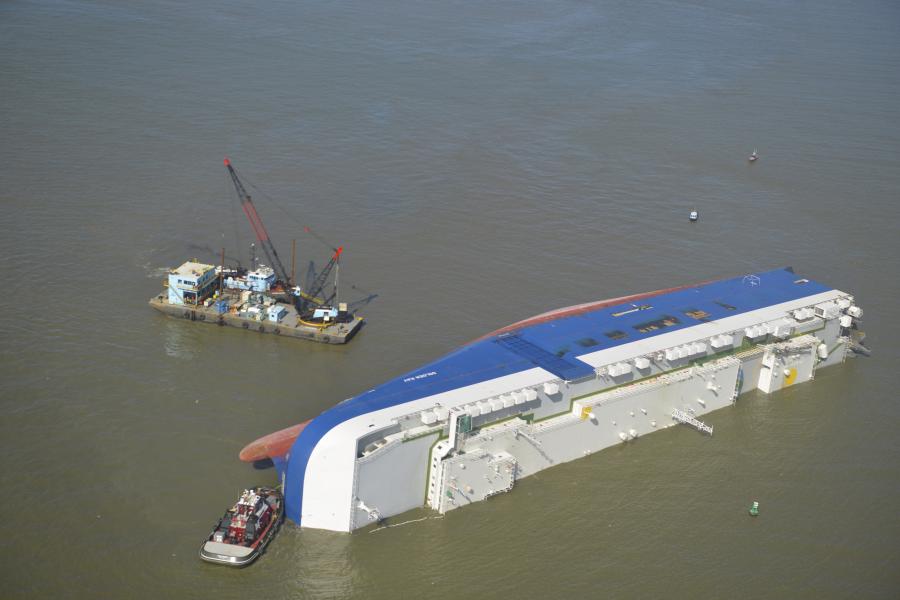 An emergency call went out at around 2 a.m. eastern time. Several hours later, the ship's pilot and 23 crew members were safely rescued. Four people were still trapped inside. The boat was unstable and a fire was raging, hampering rescue efforts. Thirty-six hours after the first emergency call, a helicopter landed on the side of the Golden Ray with a rescue team. They heard tapping coming from inside the troubled ship and proceeded to extricate the men through a hole drilled into the hull.

In mid-October, the recovery team decided it wasn't possible to safely right and refloat the vessel undamaged. Plans were made to remove the Golden Ray's hull, components and cargo by disassembling the ship in place.

According to news reports, the Coast Guard's Unified Command recently hired the Texas-based salvage company, T&T Salvage LLC of Galveston to cut up and remove the shipwreck. The ship, roughly the size of a 70-story office building, has been sitting overturned for four months.

The ship's owners determined T&T Salvage was best qualified for the job, said Unified Command spokesman and Coast Guardsman Nate Littlejohn. "T&T Salvage is known worldwide in the maritime industry and submitted a thorough salvage plan that was evaluated as being the safest and most efficient," Littlejohn said. "After carefully considering multiple bid proposals and reviewing risk projections associated with each, the owners of the Golden Ray decided to use a different resource provider for this unique situation." 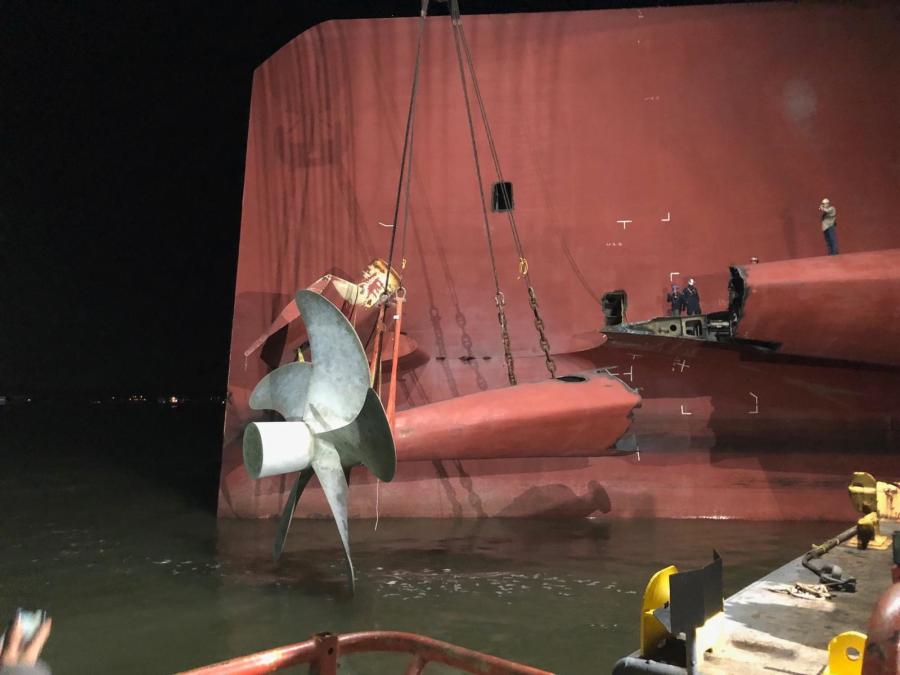 Crews have started removing the ship's propeller, propeller shaft and rudder to alleviate the stress of their combined weight — about 130 tons — on the ship's hull, the salvage team's news release stated.

In the meantime, Unified Command continues to ascertain the best type of barrier to construct around the ship prior to demolition to avoid and mitigate pollution and damage to the environment. Once that's decided, Unified Command will release a timeline for the ship's removal and other details about the process.

"This is a big step forward in this response but there's still a significant amount of work to be done," said Coast Guard Cmdr. Matt Baer.

Overturned Vessel Fenced in With Mesh

The Army Corps, which has jurisdiction over U.S. waterways, said T&T Salvage sought a permit to fence in the overturned ship with a big barrier measuring more than a quarter of a mile on its longest side.

Mesh extending from the water's surface to the bottom would be anchored to dozens of steel pilings driven into the seabed. The barrier would prohibit debris from drifting from the wreck site while an absorbent boom mounted on top of the barrier would soak up any oil or similar pollutants floating on the surface. 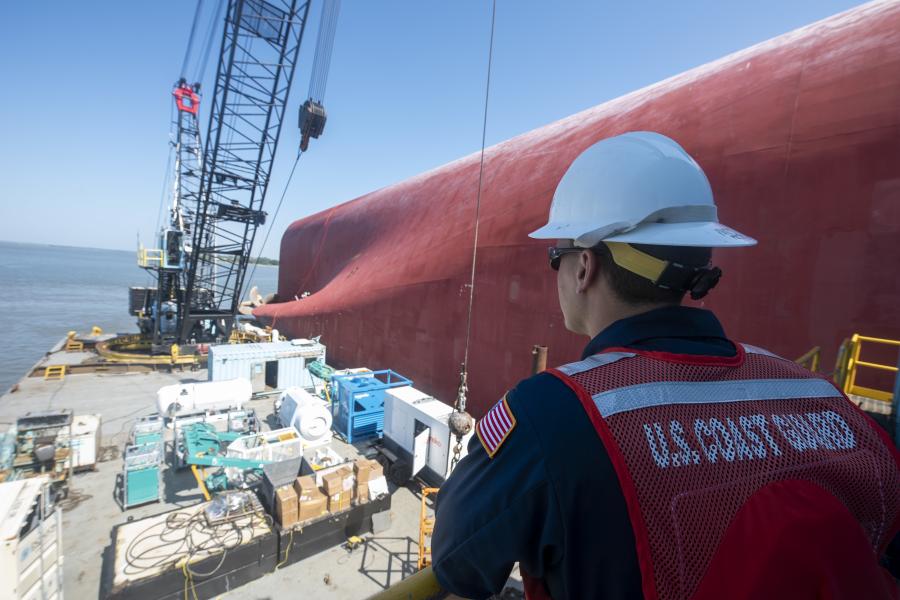 Sue Inman of the Altamaha Riverkeeper said the conservation group, which has helped officials monitor the coastal waters for pollutants leaking from the shipwreck, was taken by surprise by the request for a mesh barrier.

Inman said the group had questions about how effective the mesh would be. "We're not really sure what to think of this plan," she said. "It's the most detailed plan we've seen yet. There are still so many questions."

Littlejohn described the mesh barrier as "double-layer netting designed to contain subsurface debris," and said boat crews with skimming equipment to soak up pollutants will keep watch inside and outside the barrier as the wreckage is removed.

"It's basically a race against time," Littlejohn said. "We are doing our absolute best to get this wreck removed as close to the beginning of hurricane season as possible, keeping in mind there's no guarantee that will happen."

"The completion of the fuel removal allows the Unified Command to move on to our ultimate goal of safely removing the wreck of the Golden Ray," Cmdr. Baer said. "Removal of the vessel will be a highly complex and challenging operation."

Siphoning the fuel from the ship proved to be difficult. Divers and other workers removed more than 320,000 gallons (1.2 million liters) of oil mixed with water from the ship. The rudder and propeller also were removed.

Twenty-six tanks needed emptying and more than 500 people assisted in getting rid of the fuel. According to officials, some were submerged and could only be reached by rappelling into the ship's interior and then diving underwater. The inside of each drained fuel tank was then steam cleaned to remove any residual fuel.

Cutting the hull of a vessel into manageable sections is a common method used in wreck removal. Car carriers, however, can present a unique challenge. "Cutting in place doesn't mean you are doing huge damage to the environment, but it means you have to pay extra attention," said Richard Burke, ABS Professor of Naval Architecture and Marine Engineering at Maritime College, State University of New York. "It is a problem with a car carrier because every bit of cargo has gasoline and oil in it."

Since the Golden Ray ran aground off the coast of Georgia, workers have used several strategies to try to contain and monitor oil coming from the ship. Still, some leaks occurred even as officials worked to remove more than 250,000 gallons of fuel from the vessel. Fuel has been spotted along more than 30 miles of shoreline and there have been reports of oiled birds, said local environmentalists. 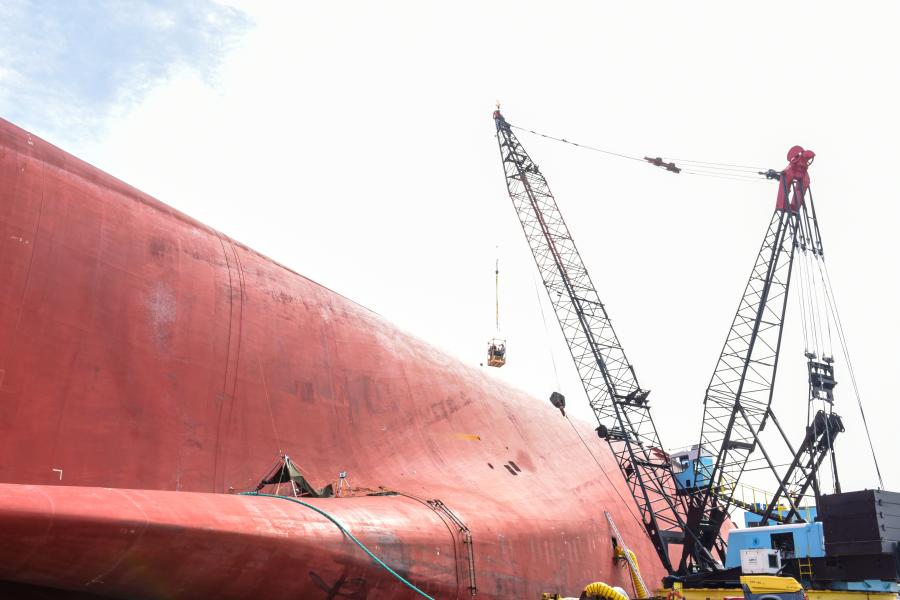 Coast Guard officials have declined to say what might have caused the Golden Ray to list and flip onto its side. The National Transportation Safety board has assigned investigators to assist them.

"There's a lot of different things that could have happened here," said maritime consultant Jim Staples, a former captain aboard vehicle carriers similar to the Golden Ray. "We definitely know there's a stability problem with the ship somewhere."

Staples said investigators will be asking whether vehicles in the cargo decks may have shifted and upset the ship's balance, and whether they were latched down properly. Were the ballast tanks holding enough weight to keep the vessel steady? Staples said crews sometimes wait to fill ballast tanks until they reach open seas to keep muddy water and marine animals from getting sucked into the tanks.

According to Coast Guard Capt. John Reed, "The Golden Ray was making a turn before it capsized. Satellite data recorded by the ship-tracking website Marine Traffic shows an inbound ship passing the Golden Ray around the same time it overturned in St. Simons Sound."

If the ship was turning at a high enough speed, the Golden Ray may have listed just enough to set off a chain reaction of events that ultimately pulled the ship down, said Brandon Taravella, a professor of at the University of New Orleans' school for naval architecture and marine engineering.

"These car carriers are kind of notorious for cargo shifting inside," Taravella said. "If you take a hard turn and then list at 10 degrees, then the cars can shift and you're listing at 20 degrees. If you've got openings in the deck and lean enough to take on water, it's going to be impossible to get it back upright." 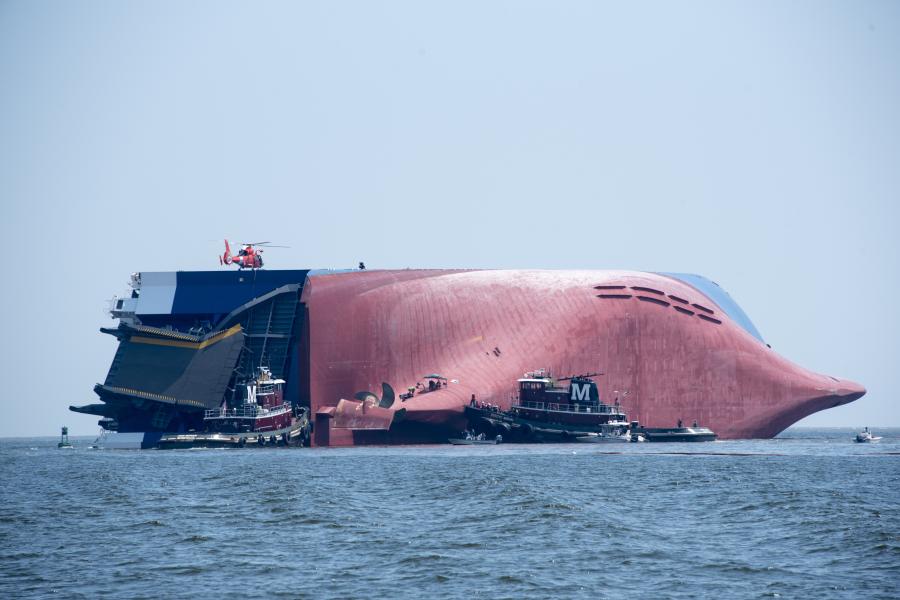 "This is a complex salvage case," explained Cmdr. Norm Witt. "It is not going to be quick. I would say we're going to measure this in weeks, if not months."

Some capsized ships have been salvaged by placing external ballast tanks beneath the side in the water, then filling them with air to push the ship upright and keep it buoyant, said Timothy McCoy, a professor at the University of Michigan's naval architecture and marine engineering program. That might be tough to do with the Golden Ray, McCoy said, considering the added weight of more than 4,000 vehicles inside.

"They may have to cut it up in place. That's the worst-case scenario," McCoy stated. "It's going to be a real challenge getting that one out of there."

The Golden Ray is the sixth major car carrier incident in 2019, according to reports from Tradewinds, an international shipping newspaper based in London. Like the Golden Ray, each of the other carriers experienced fires on board. "There are a lot of similarities between the incidents. There are a lot of fires or stability problems. Those are the two big problems that car carriers have," said Adam Corbett, a reporter for Tradewinds. CEG