The crane was provided to Tappan Zee Constructors LLC by Hoffman Equipment of Piscataway, N.J. 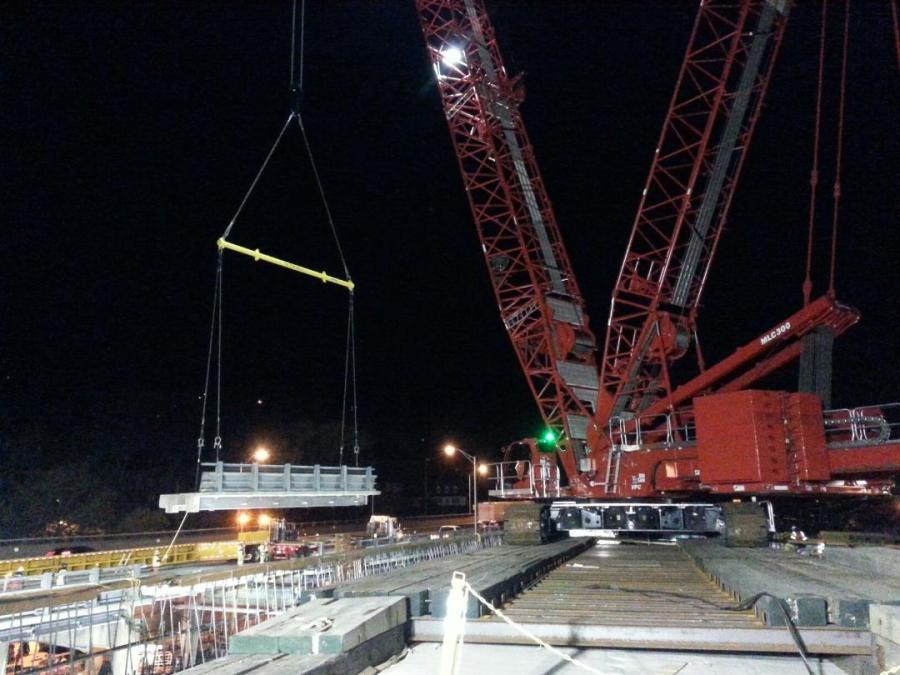 The MLC300 pulls out sections of the old Tappan Zee Bridge span at night, installs piles for reinforced concrete approach supports and reinstalls the spans.

A new Manitowoc MLC300 with a VPC MAX lift enhancer attachment played a starring role recently on the Tappan Zee replacement bridge project during the spring of 2016. The crane was provided to Tappan Zee Constructors LLC by Hoffman Equipment of Piscataway, N.J.

With the VPC MAX attachment, the older style wagon is replaced by the counterweight being able to fully extend to a tail swing of 52 ft. 10 in. (16.1 m) therefore increasing the load moment. The crane was moved to different positions on the bridge deck, disassembled, lowered onto a barge with the LCL (left coast lifter) and repositioned on the Westchester side for similar applications.

Bridge traffic has grown to about 138,000 vehicles per day, far more than the Tappan Zee was designed to support. Heavy traffic, narrow lanes and the lack of emergency shoulders has created unsafe driving conditions. As a result, the bridge has twice the average accident rate per mile as the rest of the 574-mi. [924 km] Thruway system. Hundreds of millions of dollars have been spent to maintain the structure in recent years. The cost of maintaining the current bridge for the foreseeable future rivals the cost of a new bridge, with no improvements to current traffic conditions.