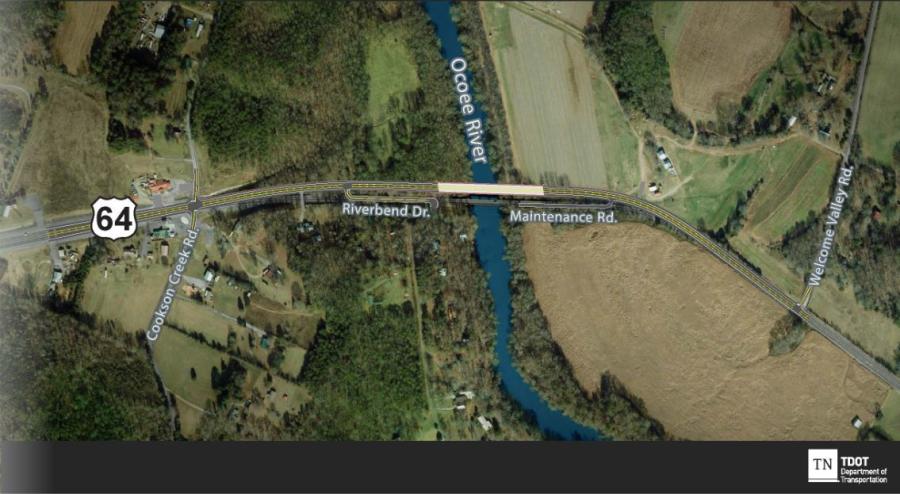 Contractor crews began a project Sept. 8 to replace the bridge on U.S. Highway 64 over the Ocoee River in Tennessee's Polk County. The site is in the mountains of the Cherokee National Forest at the state's southeastern border, near the Georgia and North Carolina state lines.

The Tennessee Department of Transportation (TDOT) enterprise will be performed using the design-build method, an approach that combines all or some portions of the design and construction phases of a project into a single contract. TDOT is using the design-build concept on some of its larger projects to expedite project completions and streamline design processes.

The design-build team for the U.S. 64 bridge replacement project consists of contractor Charles Blalock and Sons Inc. of Sevierville, Tenn., and Volkert Inc., a construction engineering company headquartered in Mobile, Ala.

The project includes construction of a three-span, steel I-beam structure on new alignment to the north of the existing bridge. The span will be approximately 600 ft. long with two 12‑ft. travel lanes (one in each direction), a dedicated center turn lane, and 10-ft. shoulders. It will accommodate future widening to a four-lane facility.

Additionally, the new structure will be a signature bridge with visually appealing features including the Ocoee River emblem, rock finishes, aesthetic bridge rails and lighting.

The project also includes intersection improvements at Hildabrand Road to the west of the bridge and Welcome Valley Road to the east.

During the first phase of the job, the contractor will begin work on the section between Hildabrand Road and the Ocoee River. That effort will consist of excavation, haul road and retaining wall construction, and bridge foundation work.

The section of U.S. 64 over the Ocoee River is classified as a Rural Principal Arterial route. It is part of a larger corridor that runs 394 mi. across the southern portion of Tennessee, connecting rural cities and communities.

Originally built in 1937, the existing 546-ft.-long bridge has surpassed the average lifespan for its type and is showing structural and functional deterioration. In contrast to the new U.S. 64 bridge structure, it is a six-span, concrete T-beam bridge with shoulders only 1 ft. wide.

The proposed new bridge would improve the safety and operation of the facility, updating the bridge to current standards and allowing for later expansion, if required.