Carbon Upcycling UCLA/CO2 Concrete, one of 10 teams competing in the final round of the NRG COSIA Carbon XPRIZE, is hoping to win $7.5 million for demonstrating the most practical technology for turning carbon dioxide emissions into a useful end product. Whoever wins the competition in 2020, the world has already won, due to the team's innovative solution to the excesses of CO2 produced by power plants and other heavy industry plants.

The UCLA team plans to turn carbon dioxide from flue gas — the exhaust gases from a coal-burning power plant — into pre-fabricated concrete blocks called "CO2Concrete," a trademarked name. The goal is to produce up to 10 tons of the product each day. The blocks will then be used in demonstration construction projects.

This innovative process takes CO2 from coal-burning power plants and heavy industry and converts the waste gas into pre-cast concrete building components while minimizing the use of traditional cement, said Gaurav N. Sant, a professor of civil and environmental engineering and of materials science and engineering and director of the Institute for Carbon Management at UCLA.

Sant and team lead on the project. He said this revolutionary method appeals to energy and building construction companies as a way to reduce carbon emissions.

"The power sector and heavy industry, more generally speaking, are under pressure to reduce emissions," he said. 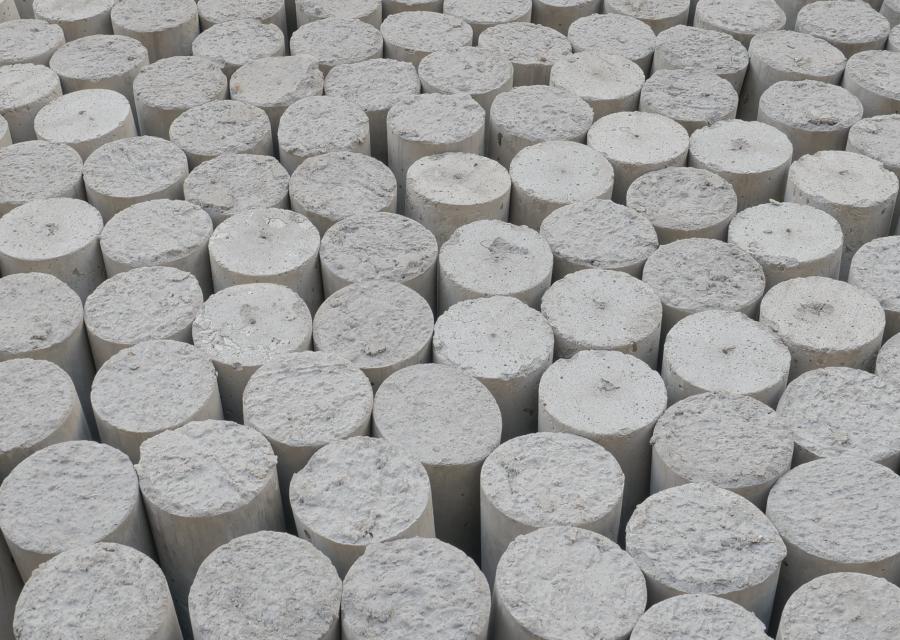 The production of Ordinary Portland Cement, the binding agent used in concrete, is a substantial producer of carbon dioxide emissions: 0.9 tons of CO2 per ton of OPC, resulting from the combustion of fuel to heat cement kilns and the calcination of limestone (which accounts for 65 percent of the CO2 emissions from OPC production). It is concrete's most CO2-intensive component. Globally, OPC production makes up 9 percent of all CO2 emissions.

Sant explained that in spite of improvements to the process of OPC production, it is not possible to abate emissions from limestone decomposition. Therefore, it's essential to change the composition and the methods of production of cement.

"Modern construction is looking at materials and how they're produced," Sant said. The industry is seeing a large carbon footprint because, Sant believes, "there has been no innovation for 200 years."

That's about to change.

The team's carbon-to-concrete technology captures carbon dioxide gas before it leaves the power plant, so there is an immediate reduction of CO2 emissions that will decrease the plant's carbon footprint.

The binder is then mixed with aggregates and water, after which it is processed by conventional concrete forming methods (dry-casting or wet-casting). The components are then exposed directly to CO2 dilute flue gas at ambient pressure, at which time CO2 is removed from the gas stream and converted into solid carbonate minerals within the CO2Concrete through mineralization reactions. In short, Sant said, "It takes up CO2 into a solid."

The end result is pre-fabricated, hardened CO2Concrete items that can be produced in different sizes and shapes, such as beams, columns, slabs, pavers, roof shingles and acoustic slabs for highway sound barriers.

"We're currently producing concrete blocks," Sant said. "They have a nice shape to work with." He thinks of it as "Lego for adults."

The other outcome of using this process is a 75 percent reduction of CO2 emissions, compared with the equivalent of OPC-based components. According to the team, the process is "efficient and clean, exhausting only CO2-lean flue gas and reusable water."

The process is completed near each plant, so there's no transportation of gas to worry about.

"We do this alongside the plant," Sant said. "It's easier to move a finished product than gas."

Start-to-finish, the process takes about 12 to 72 hours.

Carbon dioxide emissions are a greenhouse gas and an underlying cause of climate change. Reducing CO2 emissions through this process benefits the environment. In addition, Sant quotes the Netherlands Environmental Assessment Agency's figures of 8 percent of manmade carbon dioxide emissions annually emanating from the production of traditional cement, the binding agent in concrete.

He said CO2Concrete can lower the carbon footprint by at least 50 percent, compared with traditional building materials.

"It could eliminate 1 to 2 billion tons of CO2 annually," Sant estimated.

For context, he said human activities result in the emission of 36 billion tons of CO2 annually. Although it might seem like a small percentage, it could have a significant impact on GHG emissions.

The first-of-its-kind proven process generates saleable products that are competitively priced and have a lifetime that is similar to that of traditional concrete – "or better," Sant predicted.

"The composition is not that different, but it's a simpler chemistry," he said, pointing out that "there are only so many materials in the world that can be produced at scale and low-cost."

Their proprietary, patented formulation, process and components "remove ambiguity and add quality control. It removes the possibility of error."

There are some differences, however. The CO2Concrete process can incorporate CO2 from a variety of flue gases, even if they contain particulate matter and acid gases. This flexibility allows the process to be used by a wide range of industries. For example, Sant pointed out that "the oil and gas industry uses a lot of concrete." The team also expects the electric power industry to adopt this. Sant said it's conducive for cement production, glass production, oil refineries and chemical plants.

The team believes this process will demonstrate a commitment to the reduction of CO2 emissions by industrial entities, and action against environmental threats ensuing from coal-combustion residuals, thereby transforming how waste management and CO2 utilization are thought about by the construction industry.

Plants can avoid the cost of CO2 capture systems by using untreated CO2 dilute flue gas to manufacture a marketable end product for the construction industry. This permanently sequesters CO2 emissions in products and eliminates liabilities associated with the storage of off-spec fly ash, according to the team.

The system is scalable and provides a beneficial use of CO2 and low-grade waste heat from emissions streams. At this time, having applied "very critical thinking," Sant said the team has been unable to come up with any obvious downsides of the process or the end product.

The team received $500,000 from the XPRIZE organization after reaching the finals in 2018 and a $1.5 million gift in 2017 from the Anthony and Jeanne Pritzker Family Foundation to support the project.

The demonstration of the team's technologies is supported by a $2.6 million grant from the U.S. Department of Energy. The team is working with Susteon, a sustainable technologies development company in North Carolina, to help transition their system up to an industrial level.

Extensive research and development regarding CO2 mineralization technology has already taken place at UCLA, resulting in the establishment of the potential of hydrated lime and coal combustion residuals as reactants for carbonation. Feasibility using dilute flue gas streams was demonstrated in a pilot system, with its performance verified by third-party evaluators as part of the XPRIZE.

A pilot demonstration supported by the U.S. Dept. of Energy is currently in progress and is expected to position the process for commercialization.

Next year, Carbon Upcycling UCLA/CO2 Concrete will offer real-time demonstrations of its systems on an industrial scale at the Wyoming Integrated Test Center and at The National Carbon Capture Center in Alabama. The Wyoming Test Center is part of Dry Fork Station, a coal-based power plant.

Eventually, Sant said the objective is to hand off to licensees who can manage the process. The team is currently developing a commercialization strategy that includes direct engagement of stakeholders in power, concrete/building materials, chemical and waste management industries.

The team has already demonstrated a prototype system and produced concrete components. Sant envisions large commercial development because the process is "economically competitive for the marketplace" and can scale.

The short-term goal is to focus on competing for the prize, but ultimately, Sant said. "Our vision is that CO2Concrete will be at the center of a much more sustainable and environmentally responsible construction ecosystem." CEG