When Jacob Mettler volunteered to restore a 1954 John Deere Model R tractor, owned by his friend's father, he chose to do a project not many other 17-year-olds would tackle. 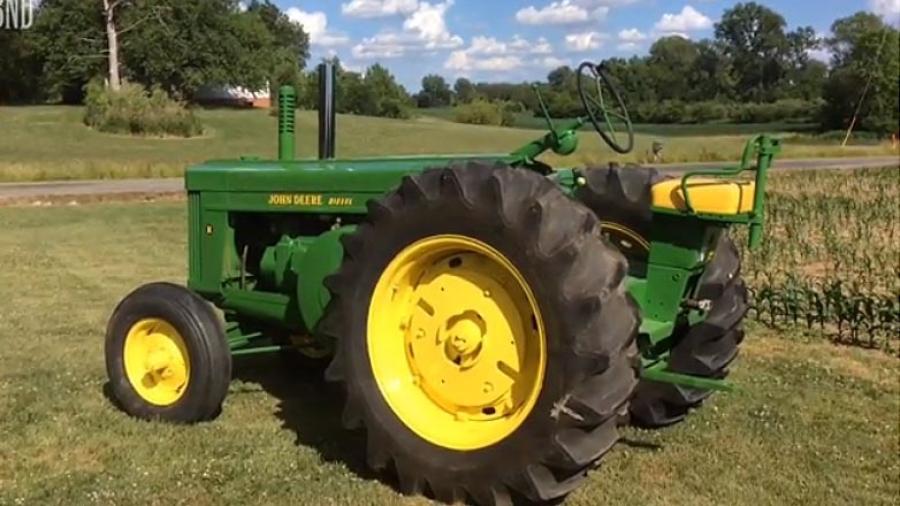 Jacob Mettler of New Douglas loves to paint. But he has a different sort of canvas.

Jacob, a 2017 Highland High School graduate, said his interest with painting began with the admiration of his father, who went to school for auto body frame repair.

“I kind of just grew up around it,” Jacob said. “I saw my dad doing it, and thought it was interesting to see.”

Jacob would often volunteer his time to paint his friend's car hoods or little die-cut metal pieces, just little one- to two-hour jobs.

It was not until the day he volunteered to restore a 1954 John Deere Model R tractor, owned by his friend's father, that he chose to do a project not many other 17-year-olds would tackle.

Jacob's father remembered coming home one day to find the old tractor sitting in the garage.

“He just brings this home — doesn't ask, doesn't say nothing. Just there it is in the shop, and he's going to paint it,” said Alan Mettler said.

The tractor is the first diesel tractor made by John Deere, and before Jacob began his project, it was caked with about 63 years worth of grime and rust. He thought it would only take two to three months to finish the job, but it would give him about nine months of many hard-learned lessons.

“It's just been a nightmare,” Jacob said. “Things I thought I could do the easy way, turned out to actually be the hard way.”

To clean the tractor, he had to start by taking it apart, piece by piece. He sand blasted the pieces he could to take off the old paint and clean the sheet metal. The parts he could not blast, had to be painstakingly sanded by hand.

“Most of the work done, he did complete,” Alan said. “I helped him with odds and ends stuff — some of the body work, told him when to repaint, why he messed it up.”

While Jacob did not work on the tractor full-time, the stress of the project began to weigh on him. His mother, Terri, even said that he stayed home a few days from school just to see pieces of the job complete.

“There were some nights I lost sleep over it,” Jacob said.

But by and by, he kept on working, and then the day came when he was ready to paint. Jacob had bought all of the paint and supplies needed to do the project, so he readied the John Deere green and began to cover the tractor.

And the education continued.

“Probably everything I painted on here I messed up at least once,” Jacob said. “So I had to sand it all back down again and do it over.”

Finally, when all of the runs in the paint were fixed and the body of the tractor seemed painted to near perfection, Jacob meticulously placed the John Deere decals. He lined up and measured the spaces for the stickers multiple times before he actually stuck them on. He only had one shot to do them correctly, and he wanted to do it perfectly. It was after he got the stickers on that his mother said she could really see the pride in his work shining through.

“I'm totally proud he made it this far; I mean who wouldn't be really,” his mother said. “He'd sit back and give it that look, and I'd stare at him. Of course, you are proud.”

Aside from the preparation work and the painting, Jacob also did a little bit of mechanical work on the tractor.

“I actually had this whole tractor split in half to fix one little $20 seal,” Jacob said. “It sounds like a lot, but it went pretty easy.”

There is still about a month's worth of work to go. He needs to finish all of the wiring and the fenders that go over the back wheels. But the tractor is starting to look like all of his hard work will pay off.

“I'm starting to see light at the end of the tunnel now, and I'm pretty glad, because it looks really good for my first time doing one of these,” Jacob said.

Alan Mettler said he thinks his son has learned a lot through the project.

“I think it's a good learning experience for him,” his father said. “I mean, he took it on himself. He did most of it himself. I did help him a little bit with a few small things, but most of the credit has got to go to him. It kept him out of trouble several evenings and a few weekends. So it all turned out pretty good. It sure looks good.”

As for the future, Jacob, who is currently working at The Korte Co., said he is not thinking about doing another project like this any time soon, but he may pursue something like it from time to time, after he has recovered from this task. For now, he is just looking forward to getting the job done.

“Painting was fun, but the prep-work was not, but I guess that is the nature of the beast,” Jacob said. “My favorite part is going to be when it leaves.”