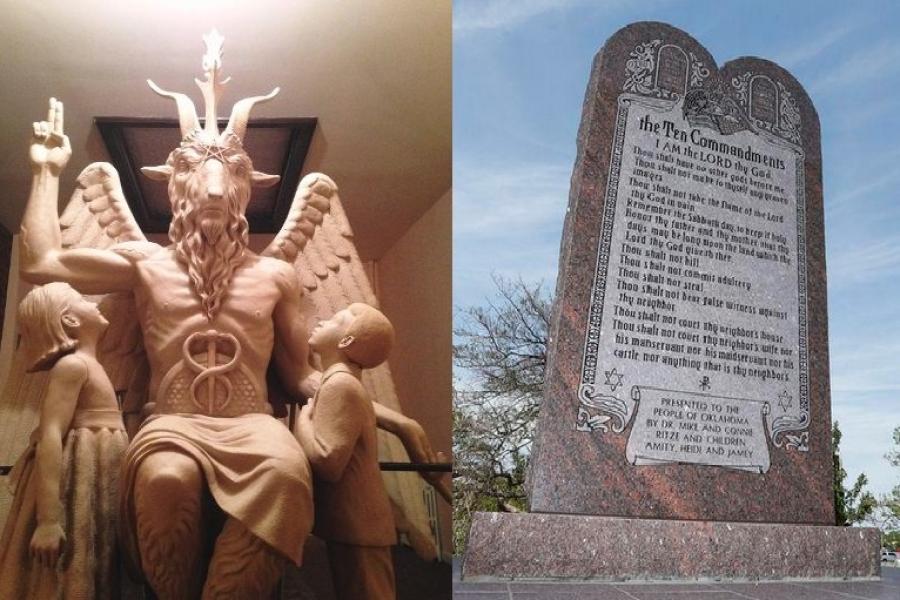 The proposed Baphomet and Ten Commandments memorials side by side.

LITTLE ROCK, Ark. (AP) - The fight over proposals to honor the Ten Commandments and Satan near Arkansas' Capitol is putting the focus on a monument-approval process that has drawn little attention or controversy in recent years. It's also a reminder that the Capitol has limited space for the competing monument ideas the Ten Commandments display has spawned.

The Capitol Arts and Grounds Commission last week began reviewing the proposed monuments, along with an atheist group's planned brick “Wall of Separation” and a memorial honoring gold star families. It's a process that's months away - and likely a court challenge or two - from a final resolution that may clarify what monuments belong near the statehouse.

The Ten Commandments monument would weigh 6,000 pounds (2,720 kilograms) and stand more than 6 feet (1.83 meters) tall, according to an application filed last month. The American History and Heritage Foundation said it raised more than $25,000 for the granite monument and its installation. The Satanic Temple has asked the commission to approve its proposed statue of Baphomet, a goat-headed, angel-winged androgynous creature accompanied by two children smiling at it. It has asked that it be placed next to or directly in front of the Ten Commandments monument. The Saline Atheist and Skeptic Society has proposed a brick “Wall of Separation” that would be erected between the two displays.

The interest surrounding the competing monument proposals is unlike anything the roughly two dozen memorials and displays surrounding the Capitol have seen over the years. The last memorial installed on the Capitol grounds, honoring the state's fallen firefighters, was completed after years of fundraising but virtually no controversy surrounding it.

In contrast, the Ten Commandments and Satan statue ideas have prompted a flurry of calls. By early last week, Secretary of State Mark Martin's office fielded at least 280 through a hotline it had set up last month to gather public comment about the proposals. Many callers objected to the satanic group's monument proposal, but many also urged the panel to reject any religious display on state property.

A final decision on the monuments appears months away, with subcommittees reviewing them in October and November. Lawmakers haven't approved the proposed monuments for the Satanic Temple, the Saline Atheist and Skeptic Society's brick wall or the gold star families group, a step that Martin notes state law says would be needed even if the panel approves the ideas. Under Arkansas law, no state agency can undertake a capital improvement project - including a monument or memorial- unless it's been submitted to and approved by the Legislature.

The bigger question facing the panel now is what wiggle room it has, if any, with the Ten Commandments proposal. The measure signed into law by Gov. Asa Hutchinson last year requires the state to allow the privately-funded monument. The law mandating the monument says Martin shall approve the display's design and location after consulting with the commission for its views. Martin said that doesn't give him any authority to reject the display outright, something he doesn't appear inclined to do anyway.

“The Legislature made the law that the Ten Commandments go on the grounds. So ultimately the commission only has the authority to actually make sure that it's consistent with the aesthetics and the construction aspects and stuff like that is actually being complied with,” Martin told reporters last week. “So as far as saying, `No, it can't be,' we don't have the authority to do that.”

That stance opens the door for opponents of the Ten Commandments display to challenge not just the constitutionality of the monument on state grounds, but also the process by which it was reviewed. Opponents such as the American Civil Liberties Union have said the display would amount to an unconstitutional endorsement of religion by the state of Arkansas.

&#8220Absolutely they have the ability to reject the monument, otherwise there would be no need for this process whatsoever,” said Holly Dickson, legal director of the ACLU of Arkansas.

Supporters of the Ten Commandments monument have said they're confident of its constitutionality, pointing to a U.S. Supreme Court decision upholding a similar display at the Texas state Capitol. Justices in 2005 upheld Texas' monument but also struck down Ten Commandments displays in two Kentucky courthouses.

Another wrinkle is what happens if the commission approves the other monuments, including the atheist and satanic displays, forwarding them on to a majority-Republican Legislature that is almost certain to reject the ideas? Complicating the process is the possibility that other groups protesting the Ten Commandments proposal also file formal proposals before the commission for their own displays.

A site plan from the secretary of state's office identifies nine possible future monument sites. Depending on the ultimate resolution of the monument fight, that may not be enough.

Andrew DeMillo has covered Arkansas government and politics for The Associated Press since 2005. Follow him on Twitter at www.twitter.com/ademillo