Ten Reasons Why Contractors Should Use MasterRents 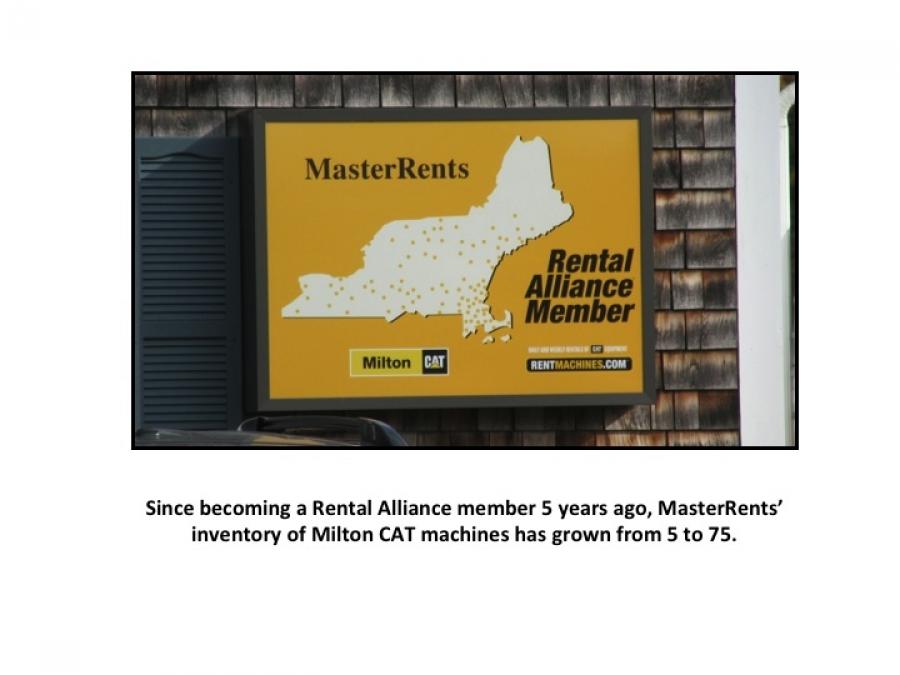 Since becoming a Rental Alliance member five years ago, MasterRents’ inventory of Milton CAT machines has grown from five to 75.

Ask Jeff Masterson to give you a couple of reasons why North Shore contractors should rent equipment from Danvers, Mass., caompany MasterRents to tackle a tough job or finish a project on time. His answer? “I'll give you ten.”

The reasons come from Masterson himself and his staff members, MasterRents Salesman Al Garber and Operations Manager Bill Peach. The reasons certainly resonate with contractors in the area; in the five years since MasterRents opened for business as a member of the Milton CAT Rental Alliance Network, a network of independent rental stores that offer daily and weekly rental of Caterpillar equipment and other complementary lines, the company has steadily grown. From a small inventory consisting of a few skid steers to a rental business that now boasts 75 Cat machines. And now for the reasons…

Masterson's view is that the customers of area contractors don't care whether the machine on the job site is the contractor's or if he is renting it; all the customer cares about is that the contractor finishes the job on time and on budget. So if you can rent what you need and return it when you're done, tying your money to equipment you don't know for sure you'll need in the long run makes no business sense. At any rate, other than the Cat logo and the Milton CAT stickers, there are no names on the machines rented by MasterRents.

“Looking at a job site, nobody would be able to know that some of the machines working there are not actually the contractors,” Masterson said.

As Garber explained, renting lets you check out the latest models, often equipped with state-of-the-art technology, so you can test them at your own site and decide whether it makes sense for you to make the investment. A good example is a track skid steer with a laser grader that MasterRents has for rent, and that has opened new opportunities for a couple of local contractors.

According to Masterson, when you work with an established rental alliance member such as MasterRents, you know that you have access to an inventory that's hard to match,

“MasterRents can get you pretty much any Cat machine you want to rent, straight from Milton CAT.”

Once you make your decision to rent, you don't want to second-guess yourself regarding whether or not you made the right choice. Work with an established rental partner that has the human and financial resources to maintain a complete and impeccable fleet, and the clout to get additional equipment for rent when a customer needs it.

During busy spells, contractors may find themselves moving machines around to take care of what's urgent, and sometimes they end up “making do,” using the second or third best because the one that would fit perfectly is at another job. What happens then? Productivity suffers. With a good rental source backing you up, you don't need to compromise.

As Masterson said, “It's a special kind of attitude; the willingness to network with a rental company and not try and do everything on your own with what you have at your disposal. Masterson is convinced that the “partnership” approach to business is the best one, and opens a contractor's eyes to other ways of doing things.

It's a real WIN/WIN; you use the machine you need to handle the job you have to do, and you know that your machine will be delivered to you in top shape, ready to work. Service and repairs are not your problems. MasterRents has four full-time mechanics, which allows it to do 95 percent of its work in-house.

“Sometimes participating in a potentially profitable bid depends on your having one or two specific pieces of equipment in your fleet — but those machines may not make business sense for you to own,” Garber said.

Don't put the brakes on your vision, said Masterson, your plans for growth can be as ambitious as you dare. Just make sure you have a rental partner who can support you with the right machine at the right time.

Masterson thinks this is actually one of the main reasons for MasterRents' success.

“We have a dedicated salesperson whose experience as a contractor and his knowledge of the equipment and work tools are the most valuable advantages our customers get,” he said, talking about MasterRents Salesman, Garber. And Gerber confirmed that's one of the facets of his job he appreciates the most, “Spending the time to listen carefully; asking questions about the specific job, the challenge, the goals…will often allow me to offer advice that saves the customer money and aggravation.”