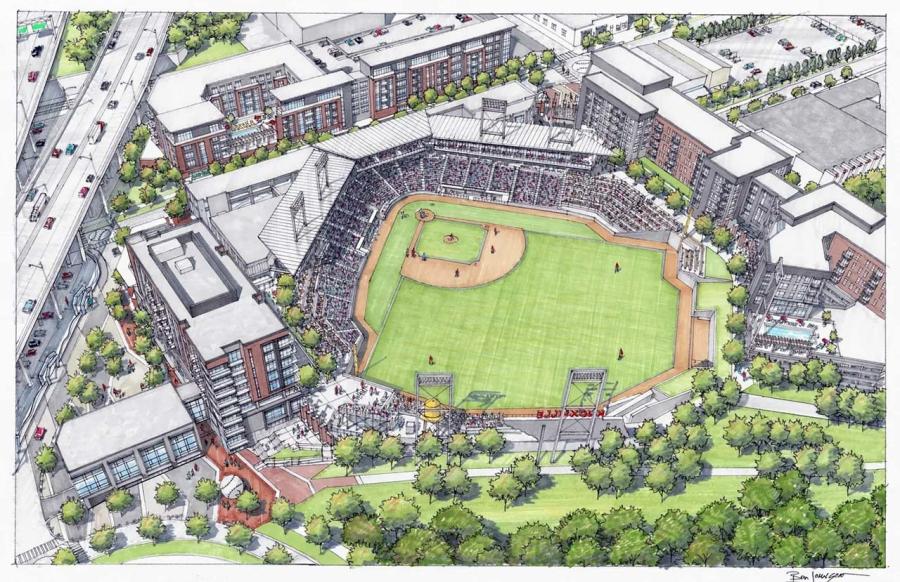 As envisioned by Smokies owner Randy Boyd, the ballpark will be the centerpiece of $142 million in new development near Knoxville’s Old City area, including retail, residential, restaurants, and potentially a new downtown grocery store. (Tennessee Smokies rendering)

The Tennessee Smokies minor league baseball club is thinking through where the team will play if its new $80.1 million Old City stadium complex in Knoxville is not ready in 2024 for the season opener.

A team official told the Knoxville News Sentinel on March 22 that the club is planning for the complex to be ready for opening day in April 2024, but the timeline is getting "tight" and the Smokies are keeping their options open for where they will play that year.

The Knoxville news outlet reported that Smokies CEO Doug Kirchhofer told the local Sports Authority Board March 22 that construction cannot begin until infrastructure work, most notably moving a water main that runs underneath the site, is completed.

The Sports Authority is a joint Knox County-Knoxville board that oversees the project's financing.

Kirchhofer added that the Smokies are not sure if there is precedent for a midseason move but felt certain that operating at full capacity in two separate locations in the same season would be difficult, according to the newspaper.

Plans Call for More Than Just a Baseball Park

What this could mean for the One Knoxville Sporting Club, which will share the space with the Smokies, is still to be decided. The soccer club kicks off its inaugural season in May and will play its home games this season at Austin-East High School, Knoxville Catholic High School and Maryville College.

Co-owner Drew McKenna said that One Knoxville Sporting Club is committed to a partnership that delivers a multiuse facility as efficiently as possible.

University of Tennessee President and Smokies' owner Randy Boyd has a lease with the Kodak stadium that runs through the 2025 season. Since the conception of the Knoxville stadium idea, the timeline that Boyd and city and county leaders have for the project has been aggressive.

The News Sentinel noted in its March 23 story that Boyd has never been shy about the possibility of cutting his Kodak lease short and paying the resulting penalty once the new stadium is ready. Though not ideal, it will save Boyd about $300,000 in lease penalties if the team waits until 2025 to leave for Knoxville, according to the newspaper.

Of the total projected construction cost of the stadium, $74.5 million will come from public coffers. Knoxville and Knox County are footing most of the bill, but the state chipped in $13.5 million, and Boyd has committed $5.8 million toward construction as well as any cost overruns.

He also has promised to bring at least $142 million in private money to build 630,000-sq.-ft. of restaurants, retail shops and residences around the Knoxville stadium.

The Smokies Set to Adjust Name

The Tennessee Smokies are a Double-A affiliate of Major League Baseball's Chicago Cubs. The team's longtime ballpark, in the Knoxville metropolitan town of Kodak, seats up to 8,000 fans. Ironically, the modern stadium in Knoxville is planned to host just 7,000 people.

With the move, the baseball team will change its name back to the Knoxville Smokies, a moniker it held for many years prior to moving to Kodak before the 2000 season.