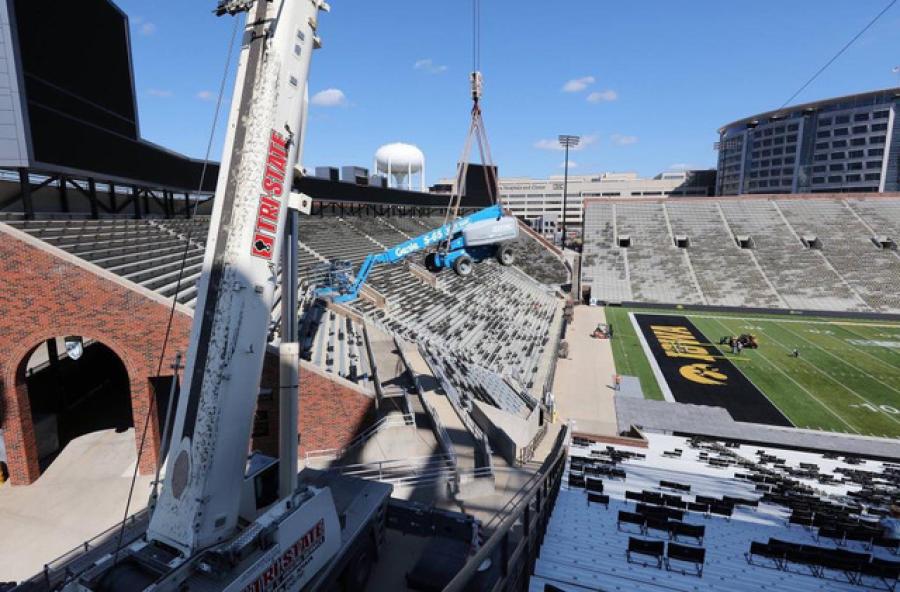 The AC 350/6 crane was used to hoist equipment into the stadium for a benefit concert.

However, business growth had CVS often renting the cranes it owned to its customers, so CVS decided to get into the crane equipment business. “We formed Tri-State as a differentiator when we purchased Anderson Crane Service in 2004,” comments Craig Breitbach, president of Tri-State and CVS, also of Cedar Rapids.

When adding crane equipment, Breitbach only partners with manufacturers who share the same sense of urgency as he does on steel projects. “When a crane is down, it's not just the five guys working with the crane who don't have work. This also stops the trades like drywall workers, roofers and electricians,” he says. The support received from RTL and Terex is one reason why Tri-State's fleet includes a sizeable number of Terex models.

Even with its sizeable fleet, Tri-State was still missing something. Its fleet topped off at the 240-ton (220-tonne) class, so the company frequently turned down larger lifting projects. This led Breitbach and Tri-State's General Manager, Marty Recker, to investigate the 400-ton (350-tonne) capacity class.

Jumping to a higher class can be a bit daunting for a crane company, since there is often the question as to whether the market has enough work for the crane. However, Tri-State worked with RTL and Terex to review market opportunities and select the versatile 400-ton (350-tonne) class Terex AC 350/6 all terrain crane for maximizing the number of lifting opportunities in the market. Tri-State quickly capitalized on the crane's flexibility.

“The AC 350/6 has a 210-ft (64-m) main telescoping boom and an impressive 412 -ft (125.7-m) maximum system length. By rigging the crane with its Superlift system, it can out-perform cranes in the 440-ton (400-tonne) class,” says Bryce Meier, Regional Business Manager for Terex Cranes. Kempf offers, “It is also the most compact 6-axle crane produced, which gives Tri-State a high capacity crane that can fit in tight spaces.”

A compact footprint delivers huge advantages for Tri-State when working for its industrial customers. “We often work in confined areas, where the crane's accessibility and reach come in handy,” says Breitbach. “When servicing our corn and cereal plant customers, we need a big crane with high lift capacity that can fit into tight places.”

Recker appreciates the crane's quick set-up with its fully automatic counterweight rigging system. “We can rig the crane with full counterweight within four hours,” he says. “We use this crane for projects ranging from a half-day to several weeks, and we de-rate the crane and efficiently use it on lifting projects that don't require full counterweight.”

The Back Porch Revival

Without the reach, capacity and quick setup offered by the AC 350/6 crane, Tri-State would not have been able to successfully bid a unique project at a local university to kick off the 2016/17 football season. A benefit concert for the Native Fund held at The University of Iowa's football stadium featured headliner Blake Shelton and other Country Music icons.

The concert had big-name bands, well known sponsors and one major unforeseen issue – accessibility. “No tunnel was large enough to get the equipment or stage into the stadium,” recalls Recker. Organizers needed a way to get everything inside the stadium quickly and efficiently.

Tri-State devised a plan that positioned the Terex AC 350/6 crane outside the northwest stadium corner to hoist all the equipment and materials over the walls and onto the field. “We would need the full 257,300 lb (116.7 tonnes) of counterweight and use the full 210-ft (64-m) telescoping boom,” mentions Recker.

Organizers agreed to the proposal, and Tri-State moved the AC 350/6 crane and six trailers transporting the counterweight slabs into position. The crane was ready for its first lift in less than four hours. “In about 1.5 days, our crew made a total of 50 picks, which included the stage, truss work, equipment and concrete blocks,” says Recker.

The heaviest lift was a Genie S65 telescopic boom used for stage construction. Even with the crane working at extended boom length and radius, it gave Tri-State's crews plenty of capacity to lift the 22,000-lb (10-tonne) boom into the stadium. “When the concert was over, we completed tear down in one day,” adds Recker.