A compact design and powerful performance characteristics — this is the combination that makes the AC all terrain crane series by Terex the best choice when it comes to work sites with limited space. 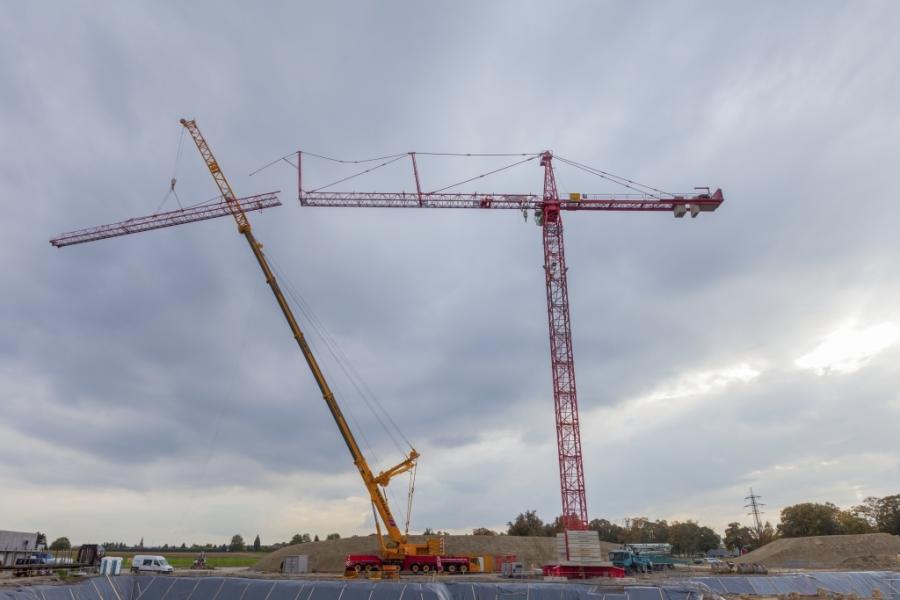 The decision to use the latest acquisition in Wiesbauer’s fleet for the project was not only based on the AC 700 crane’s technical characteristics, but also on logistical considerations.

A compact design and powerful performance characteristics — this is the combination that makes the AC all terrain crane series by Terex the best choice when it comes to work sites with limited space. This was the case when Wiesbauer GmbH & Co. KG erected a tower crane at a work site in the Swabian town of Kornwestheim, Germany, a project for which the company used its brand new Terex AC 700 crane. The Bietigheim-Bissingen-based crane service provider carried out the project on behalf of the Mörfelden-Walldorf branch office of construction company Trinac GmbH, which is building a new office building for the Wüstenrot bank in Kornwestheim.

The decision to use the latest acquisition in Wiesbauer's fleet for the project was not only based on the AC 700 crane's technical characteristics, but also on logistical considerations.

“We had the crane stationed at our headquarters in Bietigheim-Bissingen precisely at the right time, and Bietigheim-Bissingen is only an hour away from the work site in Kornwestheim,” said Thomas Wiesbauer general manager, who manages the company together with his brother Jochen.

This meant that traveling to the site with the AC 700 crane was relatively easy, requiring only the appropriate travel permit and what in Germany is referred to as a “BF-3 third-generation escort vehicle.” In addition, the unit was accompanied by an assist crane and four trucks.

Just like the trip, setting up the AC 700 crane at the work site took a short time: The seven-person Wiesbauer team, assisted by two Trinac employees, required only five hours to do so despite the tight space conditions.

“Like every other Terex crane, this unit was clearly designed with ease of assembly in mind, which is crucial to our ability to deliver when it comes to short assembly and disassembly times. In addition, this ease of assembly also plays an important role in the outstanding cost effectiveness of the model, as it makes us more competitive,” said Jochen Wiesbauer, who speaks from experience — the AC 700 crane he is talking about is the fifth crane in the series in his company already.

In order to reach the lifting height of up to 230 ft. (70 m) required to erect the tower crane, the Wiesbauer assembly technicians configured the Terex AC 700 crane with an LF main boom extension measuring 86.6 ft. (26.40 m), an SSL system with a 30 degree offset, and 110.23 tons (100 t) of counterweight. Once set up this way, the AC 700 crane was prepared to lift all of the tower crane's components.

These components included not only a large number of relatively lightweight and compact mast sections, but also significantly more unwieldy elements, such as the slewing unit, the two-piece jib, and the counter jib. For example, the lift for the largest load, i.e., the 22.5 ton (20.5 t) slewing unit, required a hook height of 230 ft. and a radius of 78.74 ft. (24 m). Meanwhile, jib unit 1 was slightly less heavy at exactly 22 tons (20 t). However, its overall length of 131 ft. (40 m) made it much more difficult to handle, requiring it to be perfectly balanced. The lift for this unit required a hook height of 230 ft. as well. In contrast, the hook height when lifting jib section two was slightly lower at 216.53 ft. (66 m). And although this 9.4 ton (8.5 t) component was considerably lighter than the first jib section, it was also longer at 148 ft. (45 m). In addition, the corresponding lift was performed with a maximum radius of up to 131 ft.

“When lifting loads with these types of dimensions, it's not enough to just rely on the crane operator's expert touch. You also need a crane with extraordinary precision. And with its easy-to-use and tremendously responsive controls, the AC 700 proved to be the perfect machine for the job,” said crane operator Günther Mühleck.

This was one of the important advantages that enabled the Wiesbauer team to complete the job on schedule within the required time frame of five days, which included setting up and disassembling the AC 700 crane.

“Of course, we'd already assumed that we wouldn't be running into any problems — after all, we know exactly what the Terex cranes in this series are capable of,” said Thomas Wiesbauer, who is more than satisfied with the debut of his company's latest acquisition.