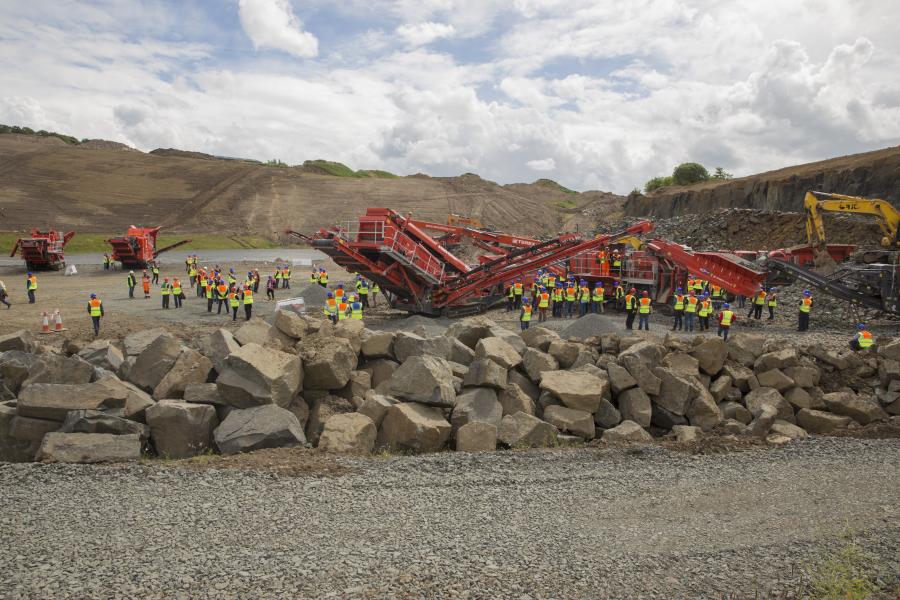 Terex|Finlay, hosted an international open day in Edinburgh, Scotland, on June 15 and 16. The event had a very international feel with dealers and end-user customers in attendance from North and South America, Europe, Russia, Japan and South Africa.

In total more than 350 dealers and customers visited the site over the two days.

In addition of the prototype model 684 3-deck inclined screener that will be launched in Q4, 2017, also was showcased.

The full machine line and demonstrations were structured as follows:

Nigel Irvine, sales director, said, “It was a huge pleasure to welcome so many international dealers and end-user customers to yet another successful Terex|Finlay open day. Innovation is at the heart of Terex|Finlay mission and vision. We've had yet another busy year of new product developments and its gratifying to receive such positive feedback on our efforts.

“We place a lot of emphasis on listening to what our customers' tell us they want and need from their equipment day in day out and judging by the feedback that we have received on the new product launches we are definitely on the right track with our new product development initiatives. To our hosts, Alex and Scott Brewster, We owe you a huge debt of gratitude! Working with you was a pleasure from start to finish, and we feel so honored to have had access to such a great site. Thank you for making our open days, the success of the event was in large part due to you guys and your committed colleagues.”

The Terex Finlay J-1170DD builds on the legacy created by the original J-1170 jaw crusher. The direct drive arrangement between the power unit and chamber enables operators to maximize fuel economy, according to the manufacturer. To further reduce fuel consumption Terex|Finlay has installed an efficient load sensing Danfoss PVG hydraulic system. This ensures only the oil that is required is utilized.

• Robust Terex 43 by 27.5 in. (110 by 70 cm) jaw crusher for high capacity and large reduction ratios in quarrying, mining, demolition and recycling applications.

• Compact dimensions and quick set-up make the J-1170 the optimum solution for contract crushing as well as demanding in pit applications.

The Terex|Finlay J-1160 jaw crusher builds upon the success of its predecessor. Terex|Finlay has integrated the Terex 40 by 24 in. (100 by 60 cm) jaw chamber onto the plant. The chamber is driven by a Bosch Rexroth hydrostatic system for variable speed and functionality of being able to crush in reverse in certain applications such as recycling black top and C&D waste.

• New model is more recycle application friendly with increasing clearances under the crusher and improved main conveyor design to reduce snagging of rebar.

• Machine transport is improved upon. The machine weight is sub 80,000 lbs. (36,000 kgs), which requires either no or a lower class of permit in certain countries.

The Terex|Finlay I-120RS impact crusher has been developed to replace the I-110RS model. As a response to market led feedback Terex|Finlay has integrated the enhanced material flow process through the plant that was initially proven in its recently introduced I-140 and I-140RS models.

• Recirculating conveyor can be rotated from closed loop configuration or utilized for stockpiling making an additional oversized product.

The second-generation Terex|Finlay 684 screener has been designed with the customer and operator in mind. For ease of onsite movement and rapid setup and tear down times, the overall machine and conveyor folding design has been simplified and reconfigured to give rapid on site deployment. Terex|Finlay has retained the original screenbox that features three large 14 by 5 ft. 7 in. (4.3 by 1.7 m) inclined screens giving a large screening area of 236 sq. ft. to provide efficient screening and high capacity.

• The fourth (oversize plus) conveyor provides variable tilt and slide slew capability to accurately discharge materials for recirculation to crushers or for stockpiling.

• A combination of quick wedge tensioning, convenient access holes and hydraulic tensioning on the bottom deck ensure mesh set up and change out times are kept to an absolute minimum.

View the 2017 Terex|Finlay open day wrap up video below: