The building will feature immersive, state-of-the-art exhibits, as well as the first 4D theater south of San Antonio. 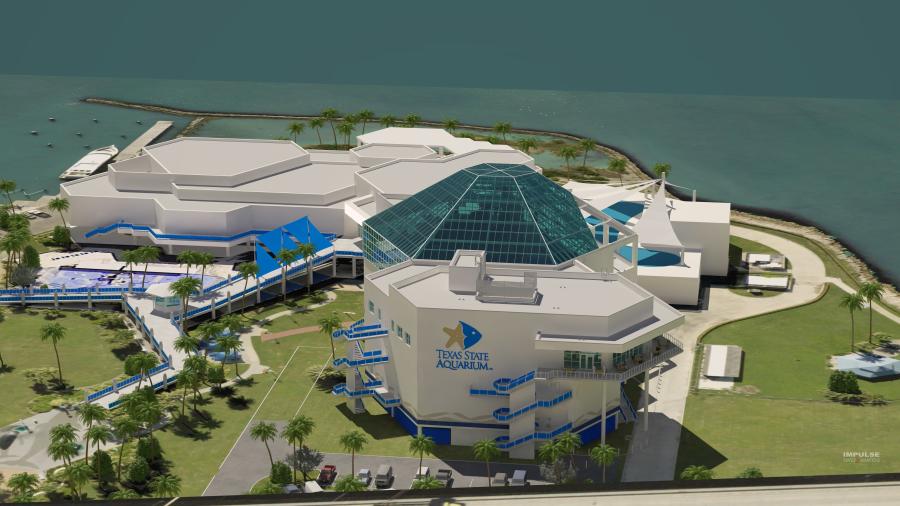 The $56 million project began in January 2015 and is currently on schedule to be complete by May 2017.

The Texas State Aquarium in Corpus Christi, Texas, is undergoing a $56 million expansion project that is designed to introduce guests to the Western Caribbean. The new 65,000-sq.-ft. (6,039 sq m) wing, known as the Caribbean Journey, will more than double the Aquarium's indoor exhibit space. The building will feature immersive, state-of-the-art exhibits, as well as the first 4D theater south of San Antonio. This will complete the final two phases of the Aquarium's original master plan. The Aquarium celebrated its 25th anniversary in 2015.

The $56 million project began in January 2015, and is currently on schedule to be complete by May 2017. The contract was awarded to Fulton Construction Company, with Bruce Netek in charge. The project manager is W.D. Carmichael.

The main funding comes from a capital campaign, for which donors are corporations, foundations, and individuals. In addition, the Texas Legislature appropriated $9 million towards the construction of the expansion in 2015. This is the largest grant or gift the aquarium has ever received.

“We are deeply grateful, and humbled, by this extraordinary commitment to our mission,” said Tom Schmid, aquarium president and CEO. “As the 'Official Aquarium for the state of Texas' we have proudly carried the state name since 1987. To receive this funding, at this time, is just overwhelming. Our thanks go out to our local delegation; every single member was supportive of our request, and encouraged us throughout the legislative session.”

The main challenge for the project noted by Richard E. Glover Jr., chief marketing officer of the Texas State Aquarium, involves the complexities of exhibits and life support systems for the live animals.

“Wind is sometimes quite significant, since the building is being built right next to Corpus Christi Bay,” he said.

Another challenging aspect was the installation of the 145,000-lb. (65,771 kg) hexagon skylight roof structure on top of the building. It was assembled on site prior to installation.

The H-E-B Caribbean Shark exhibit will feature more than a dozen large sharks and hundreds of marine fish, and will be the centerpiece of the new Caribbean Journey program. According to officials at Reynolds Polymer Tech of Grand Junction, Colo., which manufactured the panel for the tank, it is the longest aquarium acrylic window in the nation. The 759-sq. ft. (70.5 sq m) acrylic panel, weighing in at 42,000 lbs. (19,051 kg), is 9 in. (23 cm) thick and comprised of eight chemically bonded panels.

“These panels will provide amazing viewing opportunities for our guests, and the configuration of the panels is unique among major aquaria,” Schmid said. “ We know that our guests are fascinated by sharks; our goal with this exhibition is to turn that fascination into action and help support shark conservation measures that will keep populations of these apex predators healthy.”

Another unique feature of the shark exhibit is a fabricated shipwreck, which was constructed by Cemrock Landscapes Inc. It arrived in three sections, and fabrication was completed on site. To be installed, the 9,000-lb. (4,082 kg) shipwreck was flown via crane over the top of the four-story building and lowered into the exhibit.

In addition to the shipwreck, Cemrock Landscapes Inc. is creating the rock work that will be seen in exhibits throughout the Aquarium's Caribbean Journey expansion.

The acrylic viewing demi-tunnel for the 400,000-gal. H-E-B Caribbean Shark exhibit also was flown into the exhibit via crane. The demi-tunnel, which is 71 ft. (21.6 m) in length, is the longest uninterrupted aquarium demi-tunnel in North America. Paired with two additional attached acrylic window sections, the entire length of the tunnel will be 118 ft. (36 m).

The aluminum and glass roof structure was assembled on site, and weighs approximately 145,000 lbs. (65,771 kg) — without glass. The glass roof frame, which sits above the building's jungle habitats, is 152 ft. (46 m) in diameter and 46 ft. (14 m) high, making it the single largest structure that has ever been moved at the Texas State Aquarium. In order to perform the move, Fulton/Coastcon Construction brought in the largest crane it has ever used, which is rated at 750 tons (680 t). The crane itself had to be delivered in sections by more than a dozen trucks and assembled on site, which took more than a week. It is the largest crane currently in use in south Texas.

Once the roof structure was in place, 446 glass panes could be installed. Each glass panel system consists of a triple pane of missile impact-rated hurricane glass. With this roof structure in place, the peak of the Caribbean wing building now has an elevation of 100 ft. 4 in. (30.5 m), above sea level.

A Bauer BG 36 RC crane was used for the auger cast piers; a Peiner SK 415 Hammerhead tower crane for building construction; a Grove 7550 and Grove 5165-2 crane to set the acrylic panels; and a Manitowoc 18000 to set the skylight.

An economic impact study recently prepared by Impact DataSource of Austin, Texas determined that the Texas State Aquarium has contributed more than $441 million to the Corpus Christi area economy over the last 10 years, including $48.5 million in 2014. Moreover, the study determined that the Aquarium's Caribbean Journey expansion will contribute an estimated $107 million to the Corpus Christi area economy during its construction, and will boost the Aquarium's annual economic impact to almost $70 million.