TGR purchased a Terex Bid-Well 4800 paver specifically for the project, and crews planned to use it in multiple ways to complete various project segments. 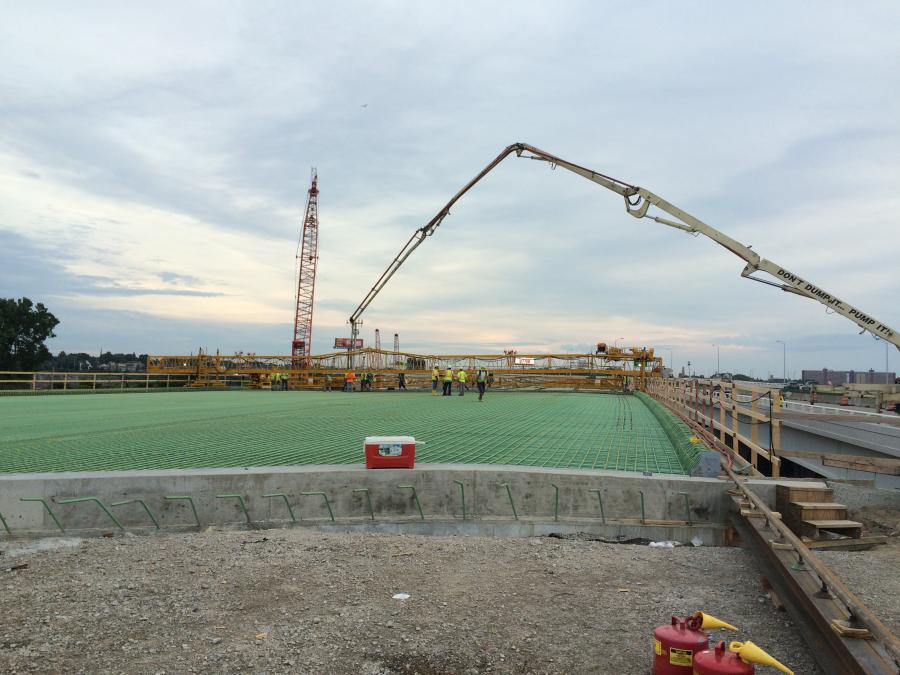 The Ohio Department of Transportation (ODOT) is in the midst of a multi-year program to replace the functionally obsolete and structurally deficient Innerbelt Bridge crossing the CSX and Norfolk Southern railroad tracks, city streets and Cuyahoga River in downtown Cleveland.

The Ohio Department of Transportation (ODOT) is in the midst of a multi-year program to replace the functionally obsolete and structurally deficient Innerbelt Bridge crossing the CSX and Norfolk Southern railroad tracks, city streets and Cuyahoga River in downtown Cleveland. The two new George V. Voinovich Bridges on Interstate 90 replacing the single 55-year-old structure will carry eastbound and westbound traffic through downtown and are just a part of the multibillion dollar Innerbelt Corridor revitalization program.

The more than half-billion dollar bridge investment has already seen completion of one, 4,347-ft. (1,325 m) long bridge and demolition of the old Innerbelt Bridge. Construction has commenced on the second 3,918-ft-long (1,194-m) twin structure and, when completed in 2016, will add lane capacity to more efficiently and safely carry the 140,000 vehicles traveling through the downtown area every day.

A design-build method —constructed by a joint venture between construction giants Trumbull, Great Lakes and Ruhlin (TGR) and designed by URS Corporation — is being used to save time. TGR purchased a Terex Bid-Well 4800 paver specifically for the project, and crews planned to use it in multiple ways to complete various project segments more efficiently to save time, labor and paving days.

TGR's first planned project for the paver was flatwork paving a portion of East 9th Street in busy downtown Cleveland.

This small section of roadway carries three lanes of traffic and offers access to I-90 West.

“The paving width for this project started at 50-ft. wide and tapered to 24-ft. wide,” said Fenton Moore, superstructure superintendent of TGR.

The challenge of paving this 150-ft. (45.7 m) stretch of road was to complete the project, start to finish, over one weekend, so traffic had to be diverted to use alternate routes. TGR meticulously planned the project. Removal of the existing road and installation, grading and compaction of subbase material was to be completed Friday night into Saturday morning. Paving with the 4800 paver of a medium-set, 24-hour-cure concrete would take place on Saturday. Finally, the crew would overlay the 9-in. (22.8 cm) concrete base with 3 in. (7.6 cm) of asphalt Monday morning before being reopened to traffic later that day.

Since TGR was prepared to use the 4800 paver for this project, the three manholes in this stretch of road were placed at grade without the need to construct box-outs, saving prep and paving time.

The job was planned for early summer, but factors outside of TGR's control significantly delayed the project. The Cleveland Cavaliers' run into the NBA post-season saw home games taking place over the weekends, “and there was no way we would have been allowed to close East 9th Street with both home basketball and baseball games taking place over the weekend,” said Moore.

Second, the weather did not cooperate, as more than two-thirds of the days in June saw measurable rainfall. Weather-related issues continually pushed back paving dates to the end of June to pour the 180 cu. yd. (138 cu m) of medium-set ODOT 4,500 PSI concrete. With a looming July start-date for critical bridge deck pouring, TGR officials made the decision to pull the 4800 paver from the East 9th Street project and subcontracted the flatwork paving to another contractor.

“Our transition segments increase frame depth from 48 in. at the ends to 66 in. in the center to provide a solid frame when paving at extended widths for the paving carriage to travel,” said Bachey.

In total, the bridge deck will require 15,000 cu. yds. (11,468 cu m) of an ODOT Class QC2/QA concrete with designed strength meeting 4,500 PSI. Deck placement was segmented into five deck-pours for the east approach and 19 pours for the main spans. While the bridge piers are positioned at skews to the centerline, the pours are broken up to where all are placed radially, so Terex Bid-Well's available skew bar kit for the paving carriage is not required for this project.

Most critical for deck placement is distribution of machine weight on the overhang brackets. To counteract machine weight deflecting the rail, TGR equipped its paver with the optional six-wheel bogie system instead of the machine's standard four wheel bogies.

“The 4800 design begins with all welded construction for maximum frame strength with minimum weight to help prevent torsional deflection,” said Bachey. “Using the six-wheel bogie system spreads machine weight over an 18-ft. span, which is about 36 percent wider than the standard four bogies. This further aids contractors working in states like Ohio to meet stringent deflection specs.”

In mid-July, TGR's crews began the first of five pours to pave the 908 ft. (277-m) east bridge approach, which encompasses four spans and requires 2,800 cu. yds. (79 cu m) of concrete. The initial pour called for variable width paving of more than 30 ft. (9.1 m) from start to finish. With the machine's frame offering up to 42 ft. (12.8 m) of leg travel to provide on-the-fly width changes, “the 4800 accommodated the variable width paving without any issues,” said Lawson. Paving of the four bridge spans of the east approach went smoothly.

By purchasing the 4800 paver specifically for paving on the George V. Voinovich Bridge project, TGR and Lawson are confident that they have the machine configured to meet any paving challenge encountered complete the rest of the bridge work.

“Terex Bid-Well pavers are the only machines I have used, and they performed well on the first five pours, so I foresee no issues on the horizon for this rest of this project,” said Lawson.