Keith Haddock Traces the History of the Dynahoe, One of the Largest Loader-Backhoes Ever Built. 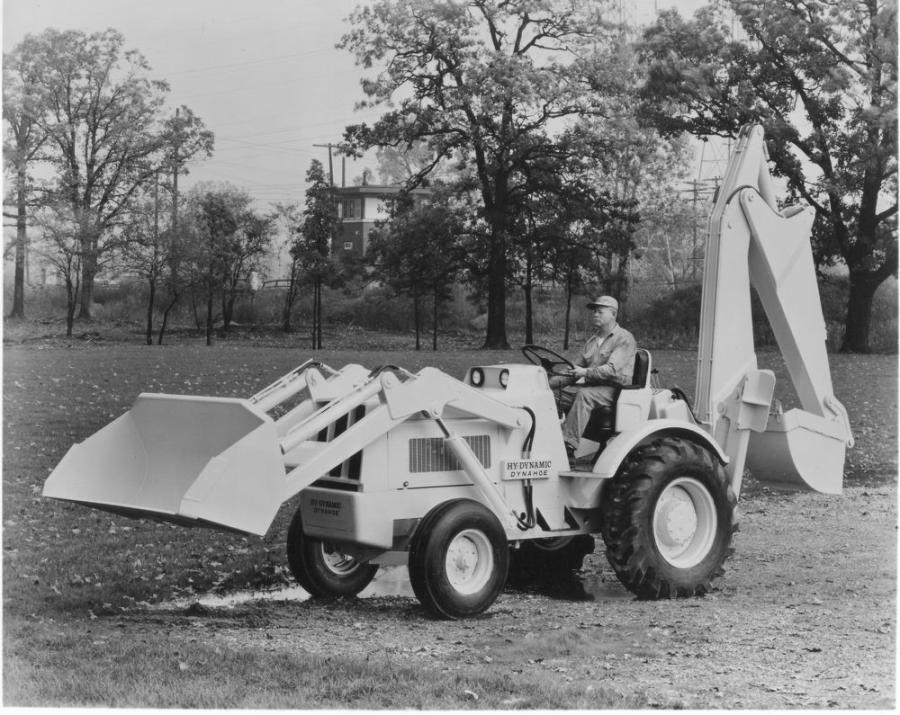 The Dynahoe Model A was one of Hy-Dynamic Company’s first loader-backhoes. The Model AD was a similar machine, but powered by a diesel engine. (Keith Haddock photo)

The loader-backhoe is still one of the most popular and visible of all types of construction machines. It reigned as the mainstay of mechanized utility work over some two-and-a-half decades after first finding popularity in the 1950s. With the advent of mini-excavators, increased popularity of skid steer loaders, and an abundance of companies making compact-sized machines, the loader-backhoe still survives. It possesses multi-task capabilities not found in the competition, and often able to complete all tasks on small jobs with just the one machine. It's able to do the excavating, loading, lifting, backfilling and cleanup, and when finished can take off by road to a nearby job without waiting for lowboy or trailer.

The Hy-Dynamic Company of Lake Bluff, Ill., was one of many companies entering the loader-backhoe market in the 1950s. In 1959 it introduced its first machine, the famous Dynahoe loader-backhoe, a machine quite different from anything else on the market. Competitive loader-backhoes had originated as agricultural wheel tractors and were generally much smaller in capacity and lightly built. But the unique Dynahoe was heavily built from the ground up as an excavating machine, and the largest of its type on the market. The average loader-backhoe in the early 1970s had a digging depth from 14 to 17 ft., an 80-hp engine, and weighed 10 tons. In contrast, the largest Dynahoe boasted a digging depth of 20 ft., carried a 155-hp engine, and weighed 16 tons.

One of the first Dynahoe models was the Model A, which came equipped with a Continental F-244 gasoline engine developing 65 hp. The Model AD was also offered with 65-hp Continental HD-277 diesel engine. Maximum digging depth was 13 ft. and backhoe loading height 12 ft. Operating weight was just over 6 tons.

Hy-Dynamic certainly set out to produce something superior to anything else available. Even this early design from 1959 sported a neat efficient backhoe linkage, integrated design and massive frame. Of course this concept and philosophy resulted in a relatively high purchase price, and consequently the Dynahoe never sold in huge quantities throughout its production life. But it served a niche market for the contractor who wanted extra capacity, production and mobility. 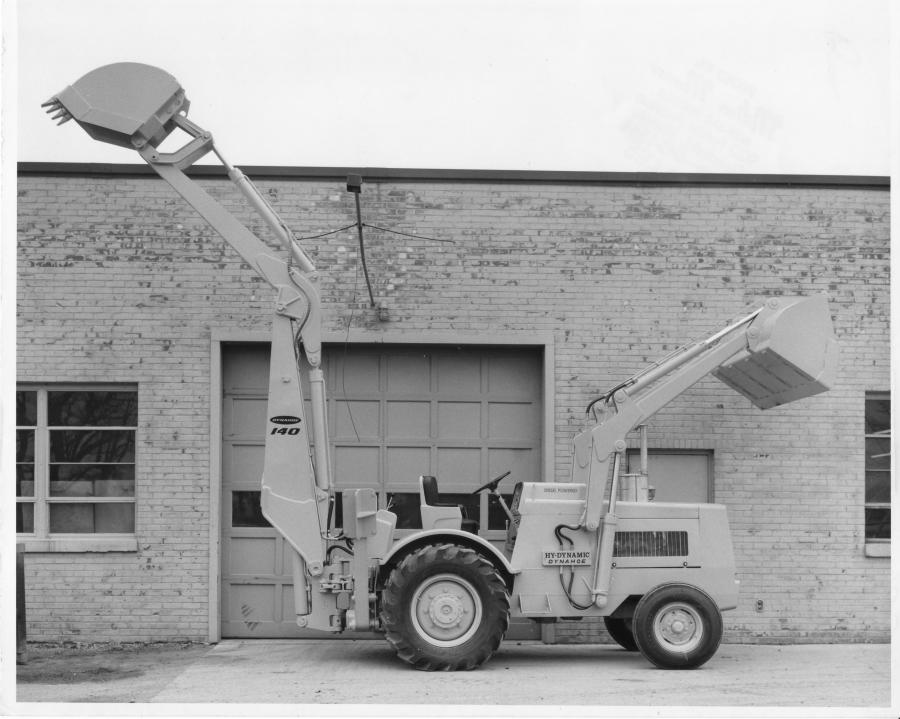 In 1966 Hy-Dynamic upgraded its Dynahoe models and launched a new range of machines with a 3-digit nomenclature, the first two digits indicating digging depth in feet. Models A and AD were replaced by the model 140, and other models in the new lineup included the short-lived 120 and 130 (discontinued by 1968), and the larger 160. In 1968 the 190 and 200-4 models were added, the latter being a heavy 4-wheel drive model with four large equal-sized wheels, and a 20-ft. digging depth.

In 1971 Bucyrus-Erie Company acquired the Hy-Dynamic Corporation. The loader backhoes were continued as Bucyrus-Erie products and the well-respected Dynahoe name was retained. This acquisition came at a time when Bucyrus-Erie's Construction Equipment Division was at the height of its activity, and demonstrated the company's desire to capture all segments of that market. The acquisition provided Bucyrus-Erie with a solid line of loader-backhoe models 140, 160, 190 and 200-4. It also provided a line of rough-terrain, wheel-mounted hydraulic cranes up to 18 tons capacity, introduced by Hy-Dynamic in 1966.

Soon after Bucyrus-Erie acquired the Dynahoe machines it upgraded the range to the B-series. Now all machines were equipped with GM Detroit diesel engines and featured advanced hydraulics and increased operating weights. The 140B was powered by a 90-hp, 3-cylinder Detroit 3-53 diesel engine with torque converter. The backhoe reached to 22 ft. at ground level and the loader bucket held 1 ¼ cu. yds. Machine weight was 14,800 lbs. This intermediate-sized 160B carried the same 90-hp GM engine as the 140B but with digging depth increased to 16 ft. by interchanging the boom foot pivot and boom hoist cylinder pivot positions. The lower boom position achieved greater digging depth but reduced loading height by some 3 ft. Machine weight increased to 15,800 lbs. The larger 190B came with the same Detroit 3-53 diesel as in the 160-B, but rated higher at 95 hp. It was basically the same machine as the 160B but with deeper backhoe digging depth to 19 ft. and increased loading height to 12 ft. 9 in. Front loader capacity for both machines was 1 ½ cu. yds. 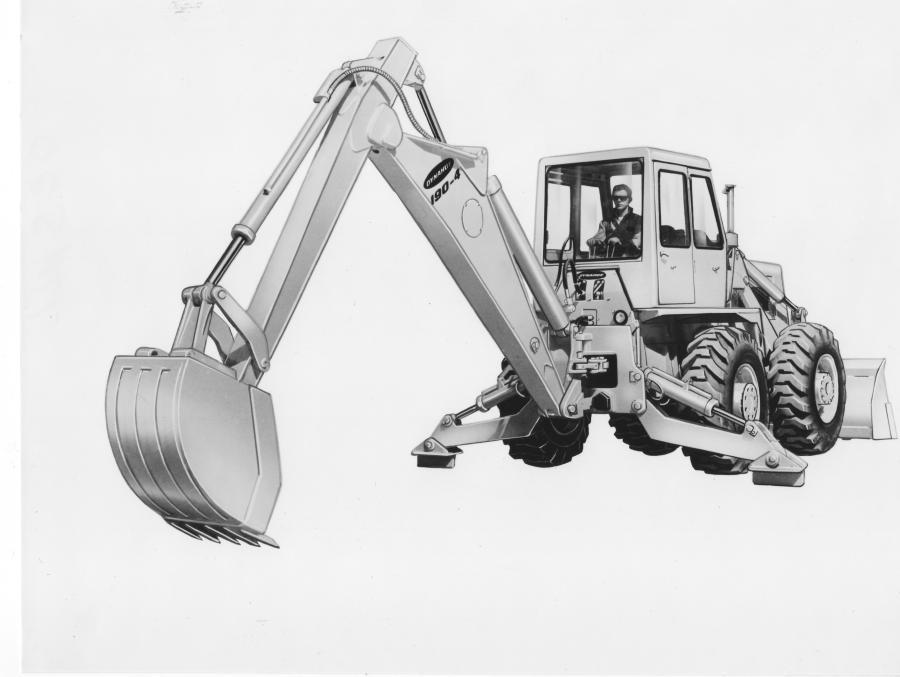 About the same time as the Bucyrus-Erie acquisition, the model 190-4, a 4-wheel-drive version of the 190, was introduced. Boasting four equal-sized wheels, it was powered by a 4-cylinder Detroit 4-53 diesel of 126 hp. As with the larger 4-wheel drive 200-4, steering on the 190-4 was provided to the rear wheels only and the front axle was free to oscillate. In operation the 190-4 weighed 22,750 lbs. including ROPS cab and supported a standard loader bucket of 1 ¾ cu.yds.

The Dynahoe 200-4 became the 200-4B under the Bucyrus-Erie banner. With an operating weight of 32,300 lbs. including ROPS cab it was the largest Dynahoe model. It carried a GM Detroit 4-71 diesel engine of 162-hp and could achieve a top road speed of 18 mph. The standard loader bucket carried 2 ¼ cu. yds. and the backhoe could pick up a load of 11,600 lbs.

In 1973 Bucyrus-Erie closed the Lake Bluff, Ill., plant and transferred Dynahoe manufacture to existing B-E plants at Evansville, Erie and South Milwaukee. Although not selling in huge quantities like the smaller competitive machines, the Dynahoe continued to serve a niche market and garnered sufficient customers to keep the machines in Bucyrus-Erie's product line until the company decided to dismantle and sell its entire Construction Equipment Division in 1985.

From 1974 the popular 4-wheel-drive Dynahoe 190-4 loader-backhoe was sold in the United Kingdom by Ruston-Bucyrus Ltd. of Lincoln. Sold as an R-B machine, its specification was identical to the American model except for a Ford 2715E diesel engine developing 108 hp replacing the Detroit engine. However, sales were discontinued in 1979, likely as a result of stiff competition from lower-priced, home-built machines and the onslaught of competition from smaller hydraulic excavators. 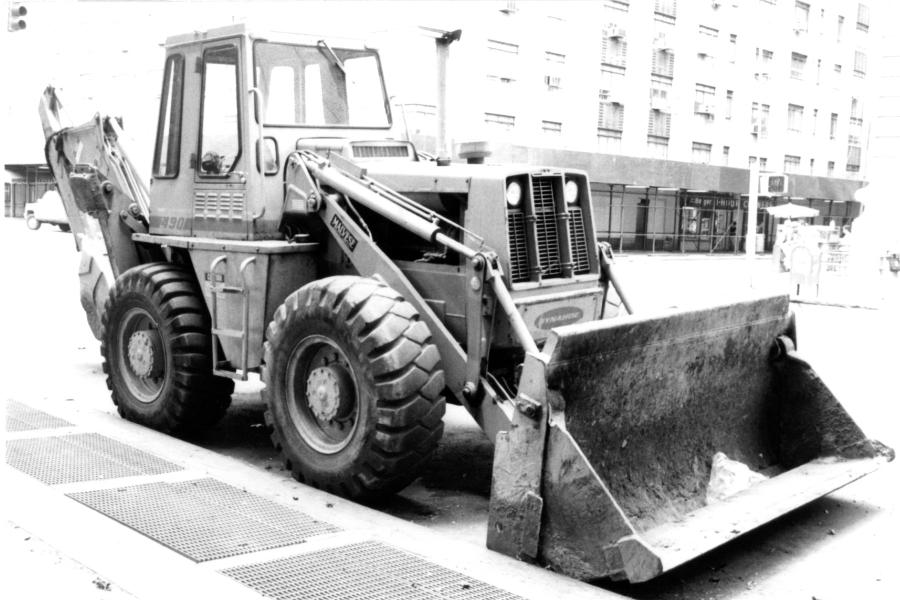 In the late 1980s Terex Corporation shuffled its various divisions and BCP became an affiliate of Koehring Cranes & Excavators, another Terex division. In 1990, as a final grasp for market share, BCP upgraded its two Dynahoe models to the 290K and 490K. These were almost identical to the previous models except that John Deere engines of 110 and 121 hp provided power. Unfortunately sales continued to dwindle and the last Dynahoe was shipped from the factory in 1993.

The Historical Construction Equipment Association (HCEA) is a 501(c)3 non-profit organization dedicated to preserving the history of the construction, dredging and surface mining equipment industries. With approximately 3,800 members in 25 countries, its activities include publication of a quarterly educational magazine, Equipment Echoes, from which this article is reprinted with permission; operation of National Construction Equipment Museum and archives in Bowling Green, Ohio; and hosting an annual working exhibition of restored construction equipment. Its 2018 show will be Aug. 24 to 26 at the Le Sueur Pioneer Power Show, Le Sueur, Minnesota. Individual memberships within the USA and Canada are $35 for one year, $65.95 for two years and $99.95 for three years, and $45.00 U.S. elsewhere. HCEA seeks to develop relationships in the equipment manufacturing industry, and offers a college scholarship for engineering and construction management students. Information is available at www.hcea.net, or by calling 419-352-5616 or e-mailing [email protected]