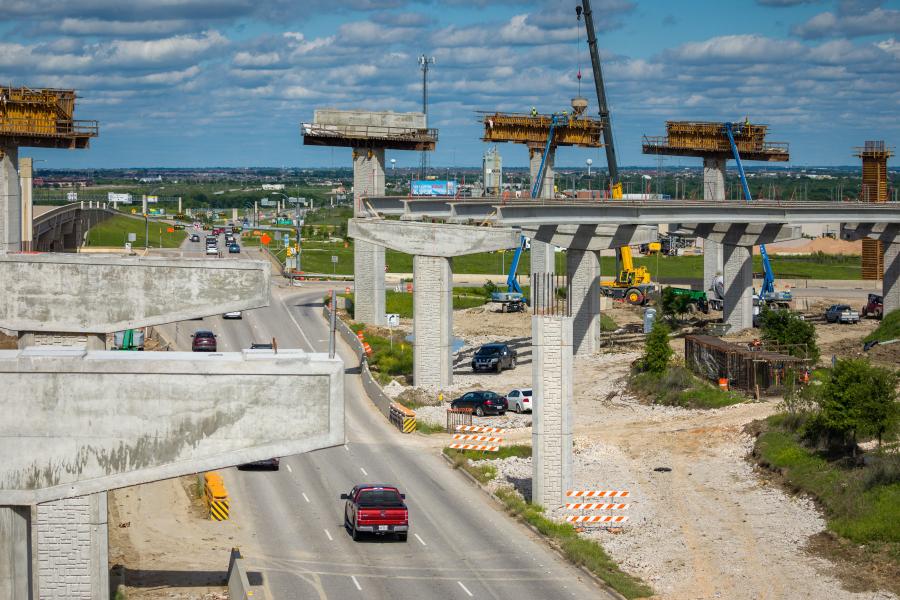 Webber LLC, TxDOT and Central Texas Regional Mobility Authority are working to deliver the final flyover of the 290/130 Flyovers Project in east Austin. Crews worked on the first two flyovers of the project shown here.

The partnership of Webber LLC, the Texas Department of Transportation and the Central Texas Regional Mobility Authority has made considerable progress on the Central Texas Regional Mobility Authority 290/130 Flyovers Project in east Austin, as the second of three flyover bridges under construction, at the 290 Toll/SH130 intersection, opened to traffic on July 11.

The 290/130 Flyovers Project is on track for full project completion in 2021, and also includes construction of a non-tolled flyover connecting eastbound 290 Toll to southbound SH 130.

"Webber has been working at an excellent pace throughout the course of the project," said Lloyd Chance, senior project manager—construction for the Mobility Authority. "As they've worked swiftly to capture the incentives, they've also prioritized quality, and it shows in the delivery of their work."

Chance explained the construction process for the flyovers. 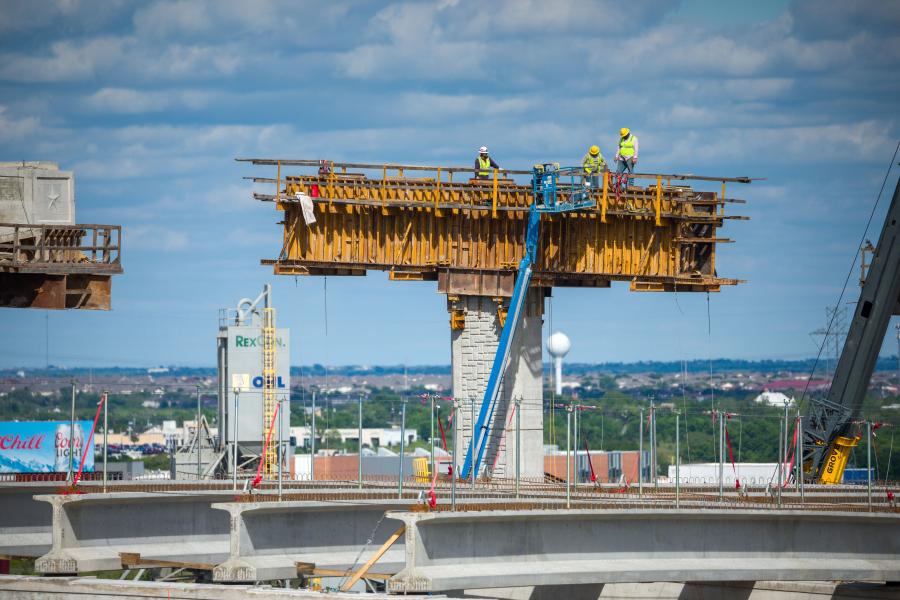 "The first step is to remove the grass and topsoil," he said. "The next steps are to drill the shafts, construct columns and caps, place beams, form and pour the bridge decks, form and pour concrete rails, construct bridge approaches and retaining walls and sign and stripe the bridges. This project does not have any major excavation work or clearing of right-of-way, because it is primarily a bridge job."

Lessons learned on the first two flyovers are being applied to the final one.

"We're always looking for lessons learned and best practices to apply for future projects," said Justin Word, the Mobility Authority's director of engineering. "Early on in this project, we determined that major traffic switches would be better undertaken on weekends when closure timeframes are longer and there are lower traffic volumes to manage."

The Mobililty Authority and TxDOT have worked harmoniously.

"We are very proud of the collaborative partnership with TxDOT that has enabled this project to be successfully implemented concurrently with their three-lane widening project on SH 130," said Chance. "While adjacent projects can sometimes pose coordination challenges, our teams have worked cohesively to ensure that each project is a success." 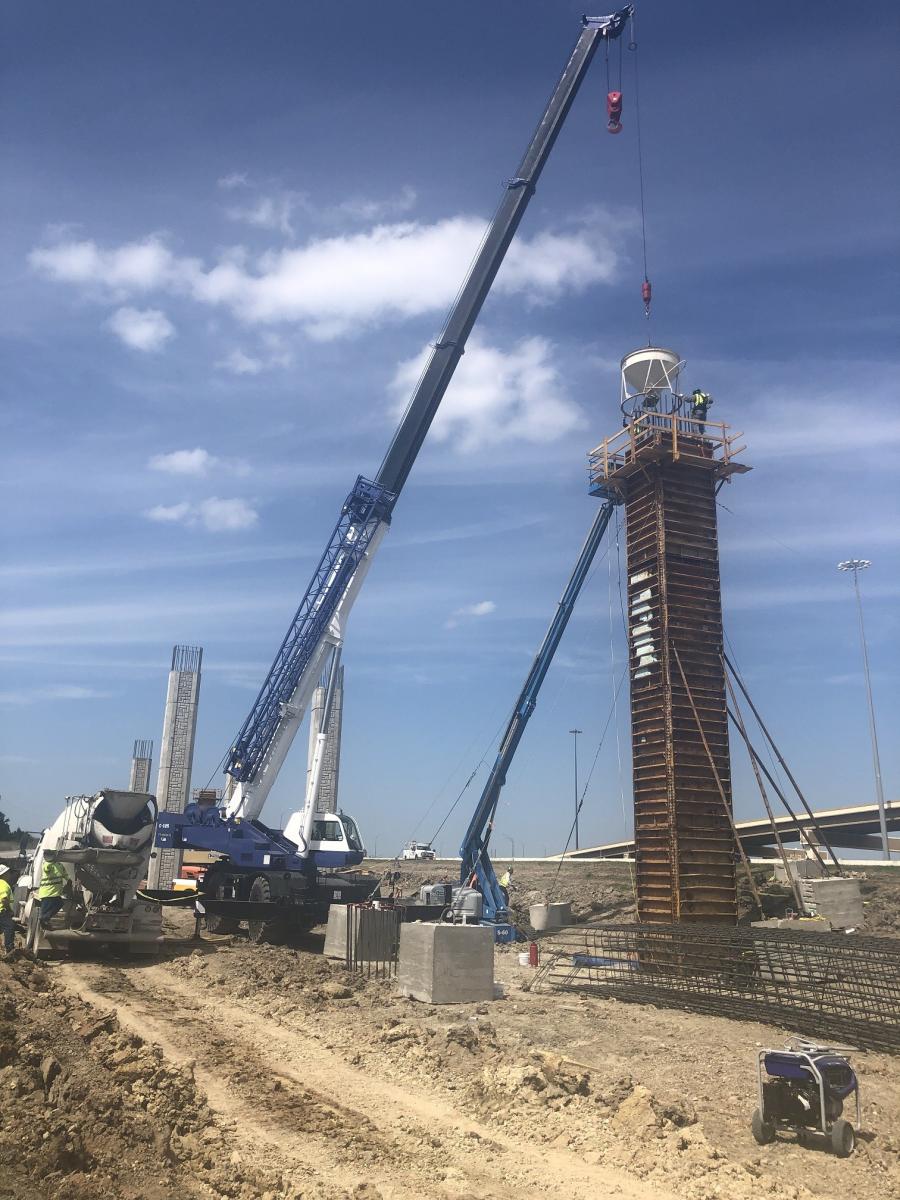 Excavation operations will result in the removal of 45,000 cu. yds. of earth and rock and via demolition and 18,000 sq. yds. of concrete.

Work is moving along at a rapid pace on the final flyover and the CMTA Railroad Bridge. A couple of exit and entrance ramps, the westbound frontage road for U.S. 290, illumination and Intelligent Transportation System (ITS), overhead sign bridges along U.S. 290, and concrete sealing on all bridge structures remain to be finished.

Tim Burhop, Webber's project manager, is pleased with the progress, but there have been challenges, as well.

"Overall, construction of the first two flyovers was smooth and efficient," he said. "But each project comes with its own set of challenges. In this case, our crews were actively constructing all three flyovers at once, requiring diligent traffic control coordination. We also drilled and poured several large bridge bent foundations measuring more than 90 inches in diameter. Throughout this project, we've incorporated templates for the monolithic drill shafts to assist with their alignment during drilling and pouring. We've also prioritized finishing during CRCP placements to ensure ride quality requirements are met, since some of the early placements required grinding to achieve the IRI/ride quality requirements.

"Safety is always a concern on the job site, particularly working near live traffic and in elevated work areas," he added. "Our crews are diligent about wearing safety harnesses, using spotters for overhead materials and performing work behind concrete barriers and under lane closures."

"Nighttime operations are particularly busy on the project," said Chance. "To capture the incentives and avoid the mid-day Texas heat, Webber has chosen to perform much of their work at night, such as beam setting, setting/stripping overhangs, tying reinforcing steel, setting precast bridge panels, forming/stripping column/cap forms and deck placements for structures adjacent to live traffic." 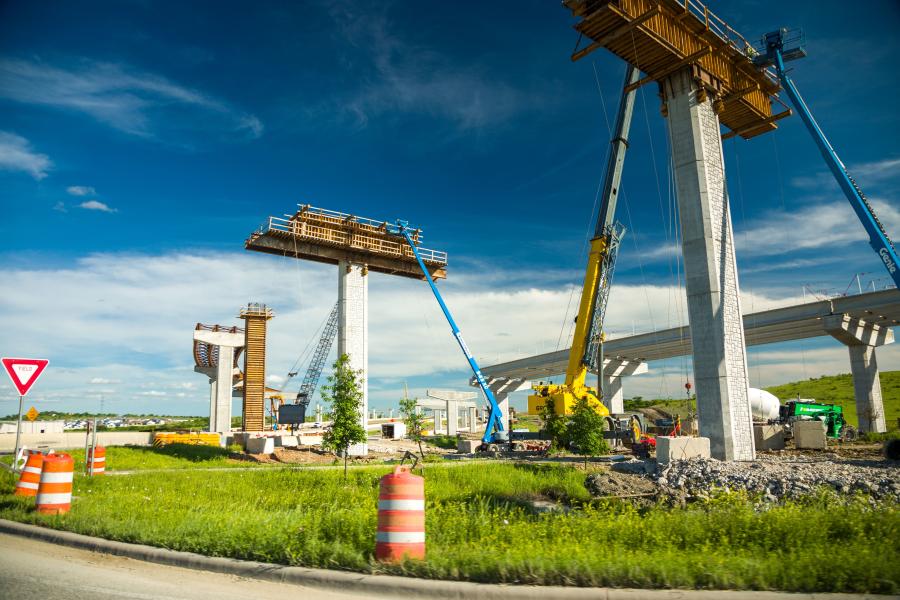 Construction of all three flyovers overlapped, but there was an increased focus on one at a time as Webber worked to reach milestones.

"Since the project remains within the existing right-of-way, utilities and water have not presented challenges," said Word. "However, we discovered some isolated soil issues during construction of the approaches and landings of the flyovers. The clay-like material held water and was pumped when proof rolling was performed prior to placement of the proposed embankment material."

The drilled shafts for the East to South flyover started in April 2019, columns started in October, and the bent caps in December.

The Mobility Authority noted that all of the drilled shafts, columns and bent caps are complete; all concrete beams have been installed; and 10 out of the 25 bridge deck spans have been built.

Regarding putting together form work for the columns and bent caps and tying reinforcing steel cages for columns and bent caps, large and tall structures such as columns 8 by 5 ft. and 9 by 6 ft. were used. Various types of bent caps such as inverted T, hammer heads, straddle caps and post tension straddle caps, also were utilized. The structures also are considered mass placement, which requires temperature monitoring.

"We've engaged in detailed coordination with TxDOT's SH 130 widening project in order to effectively tie in to southbound SH 130 just north of Blue Bluff where our projects meet," said Chance.

All Hands on Deck

Burhop has an experienced team assisting him.

"We have a very strong team dynamic," he said. "Each member brings unique skills, experience, and perspective to offer when making collective decisions. We have established great communication, respect and trust for one another, resulting in a very positive and productive work environment. Every member has a clear understanding of their roles and responsibilities, which enables us to successfully work as a team to achieve our common goal."

The concrete is being provided by Texas Concrete.

The project was designed by CP&Y. The cloud-based construction management tool – e-Builder – is being used to coordinate submittals and processing of construction submittals, RFIs, notices of design change and invoicing.

"e-builder has been an effective construction management tool for document control, and workflow processing, including submittals, shop drawings, and other items," said Word. 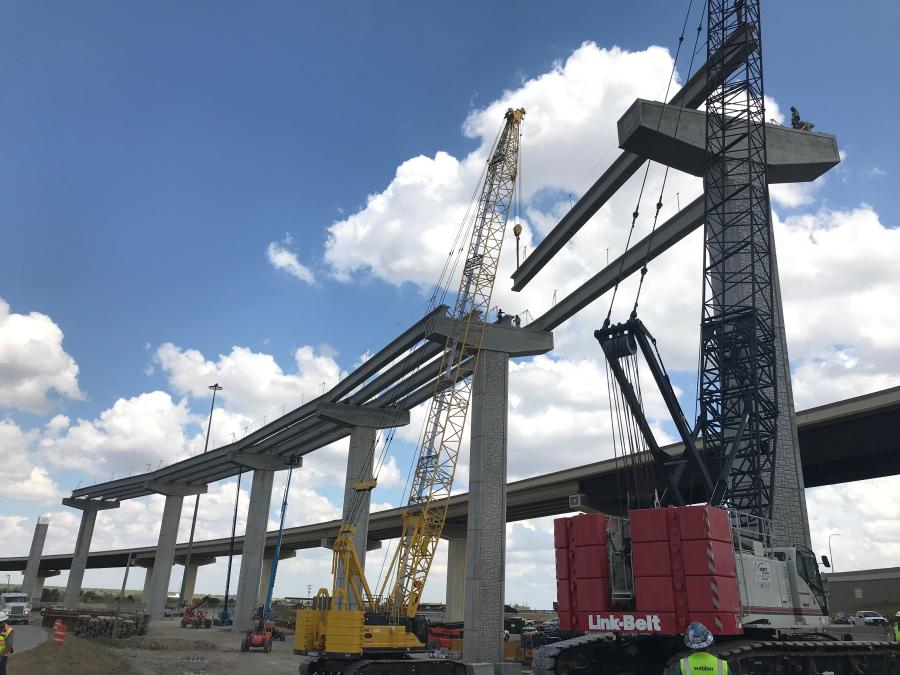 "The PCMS automatically provides real-time messaging to drivers, alerting them of traffic conditions and distances to potentially slowed or stopped vehicles ahead," said Chance.

Peak days have seen 120 Webber and subcontractor employees on-site for the south to west flyover, 150 for the south to west flyover and 132 for east to south flyover. The major subcontractors are Beaird Drilling for drilled shafts; Indus Road & Bridge for concrete structures, Texas Highway Walls for MSE walls, The Levy Company for electrical, ITS, and large overhead signs; Roadway Specialties for MBGF, crash cushions and small signs; Bradco; Kyros; Flasher for striping; and Texas Materials for riprap and mowstrip (flat work). HDR is providing all construction, engineering and inspection services.

Main wear and tear issues include hydraulic leaks, incidental dents, cooling issues and friction on parts (e.g. bucket teeth), with most items repaired within 24 hours. Webber has a mechanic that visits daily, but is not dedicated to the project. The keys for maintenance on a project like this are timeliness of reporting issues and not letting routine maintenance turn into serious problems.

Most of Webber's equipment is either owned or leased. It rents equipment from ASCO Equipment, RDO Equipment Co., United Rentals and Hunter Heavy Equipment Inc.

"The project team doesn't deal with vendors directly in relation to equipment," said Burhop. "We have a separate department within Webber that coordinate equipment vendors." 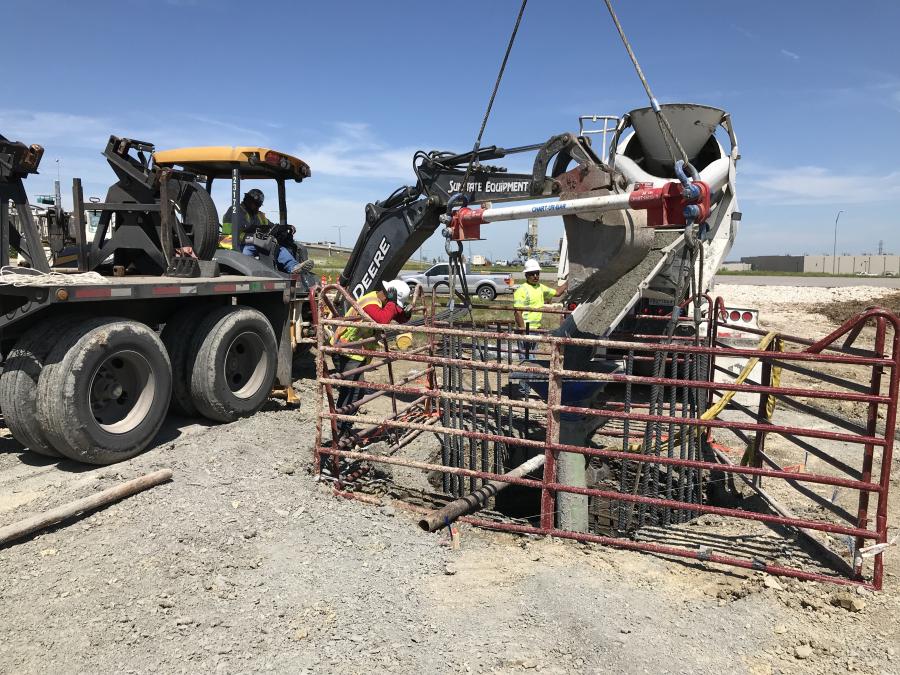 "The early completion incentives the Mobility Authority built into the contract really made a difference," said Word. "The North to West and South to West flyovers were completed months ahead of schedule, and if conditions remain as they are, we expect the third and final flyover to be complete later this year/early next year — months ahead of the June 2021 contractual obligation. Incentives have been a valuable contract tool to provide contractors the ability to be rewarded for extraordinary performance. We have seen positive results from incorporation of incentive regimes, allowing our projects to be completed more quickly, with shorter duration of construction impacts to the traveling public."

"Cost savings are translated to real dollars in the form of early toll revenue receipts and reduced months of owner-funded project oversight," said Word. "The traveling public also realizes the benefits of early completion through travel time savings and reduced impacts of the disruptions that come along with an active construction zone."

The Mobility Authority and TxDOT partnership is very satisfied with the quality of Webber's work.

"As we see drivers returning to the roadways, it's more important than ever that we continue to deliver forward-thinking and reliable mobility solutions," said Bobby Jenkins, chairman of the Mobility Authority board of directors. "These connections help lay the foundation for economic recovery as we continue the fight against the COVID-19 pandemic. As part of our commitment to improving the reliability, safety, and connectivity of our region, the Mobility Authority is proud to deliver this second flyover, a symbol of forward progress in these difficult times."

The Mobility Authority, created in 2002 to improve the regional transportation system in Travis and Williamson counties, noted that in early June, toll transactions on the 290 Toll Road indicated a 38.6 percent increase in average weekday traffic since the region's stay-at-home orders went into effect.