The Final Stretch of U.S. 191 Project 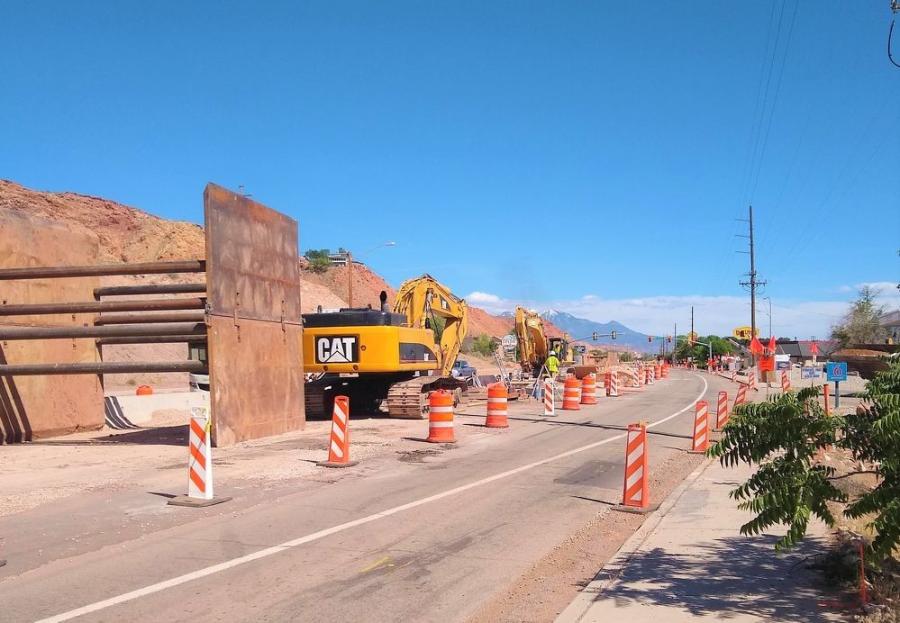 Work on a Moab, Utah, project that's been on the table in some form or another since 1993 is in the final stretch, with completion set for next year.

The $31 million phase three will widen U.S. 191 in north Moab, adding new travel lanes in both directions along with a center turning lane, new sidewalk, a new storm water collection system and an extended multi-use pathway from the Colorado River to the south end of town. 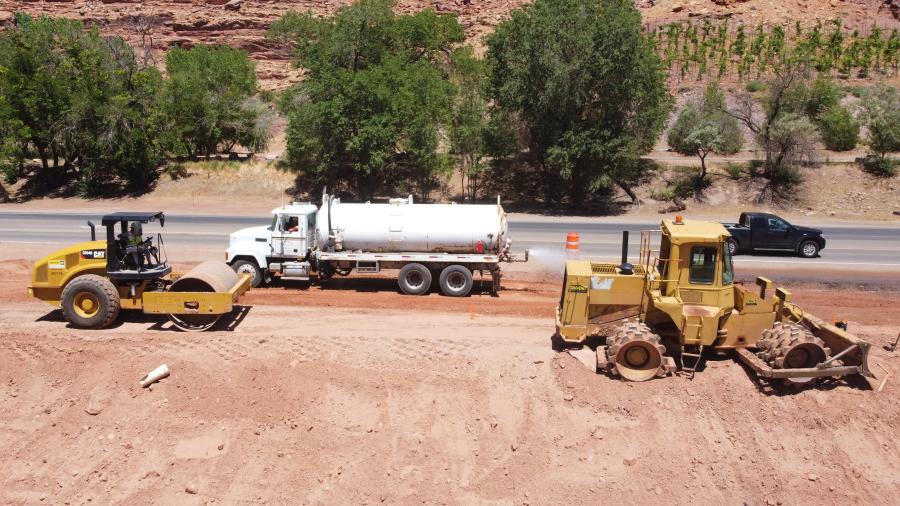 "The need for this project is capacity," said Ryan Anderson, Utah Department of Transportation project manager. "We have basically two lanes of travel in each direction coming in and out of town. But in the town of Moab, there is only one lane in each direction. It creates a bottleneck. Busy weekends and tourism season build up the congestion. Moab is growing and also, more influential, is the growth of the tourist population. Moab is known for its red rocks, the Colorado River, biking, hiking and river rafting."

The $20.5 million construction contract (an additional $10.5 million was for engineering and right-of-way costs) was awarded to Kilgore Companies of Magna, Utah. The local subsidiary is LeGrand Johnson Construction with multiple subcontractors also on site, including electrical, pipe, traffic control, paving and earthwork subs.

Heavy equipment on-site includes the usual: small bulldozers, backhoes, excavators and graders with one trackhoe featuring a vibratory compactor arm. Most of Kilgore's equipment is owned, while the subcontractors generally rent from dealers in Grand Junction or Salt Lake City who deliver on private carriers. 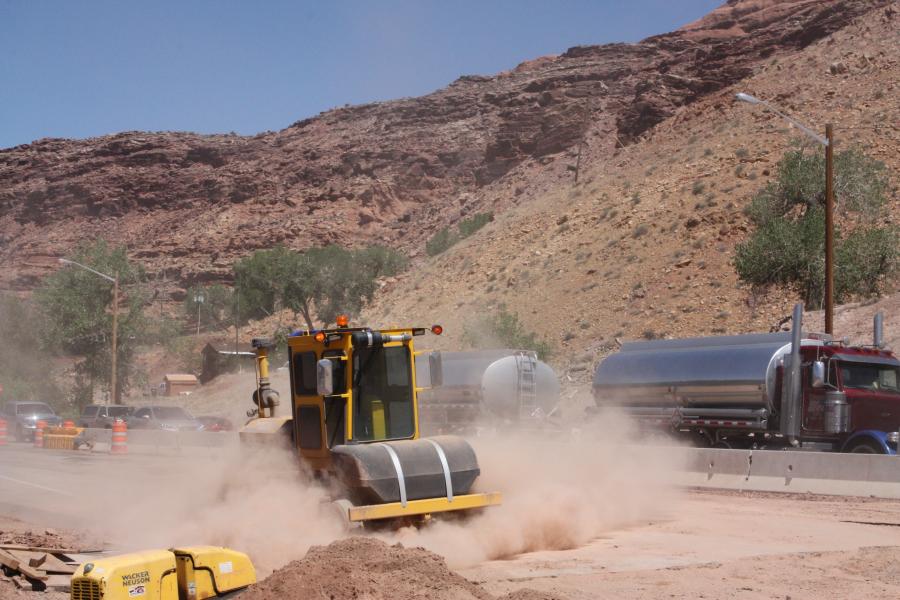 "We have to pick a location to drop the equipment and it's pretty tight," said Kris Blanchard, UDOT resident engineer. "We've got a decent amount of earth work and backhoes being moved from one location to the other with 10 wheelers. We also have a little bit of hauling. The main roadway excavation is just 63,000 cubic yards. Basically we pick up the material and move it from one place to another. Half has to be exported as we ran into a layer of gypsum and it is questionable how suitable that is for backfill. Most exports will be placed within one mile of the project boundaries as waste to a pit."

Blanchard described the job as "pretty straightforward," but it is not without its challenges.

There are numerous utilities to be moved, and working around multiple means of transportation calls for serious coordination and planning. Plus, there are two large hotel developments being constructed along the corridor of the project and more in some phase of approval.

"We've got to get the infrastructure in the street up to the standards needed to support all this," Blanchard said. "It's not that we are doing anything that special, just coming up with ways to keep traffic flowing and give the contractor real windows of opportunity to get the work completed."

UDOT worked closely with the Moab community — gateway to the Arches National Park and home to the Dead Horse Point State Park — to ensure tourism would be as lightly impacted as possible. It got an unexpected assist in that effort through an unwelcome visitor — COVID-19. 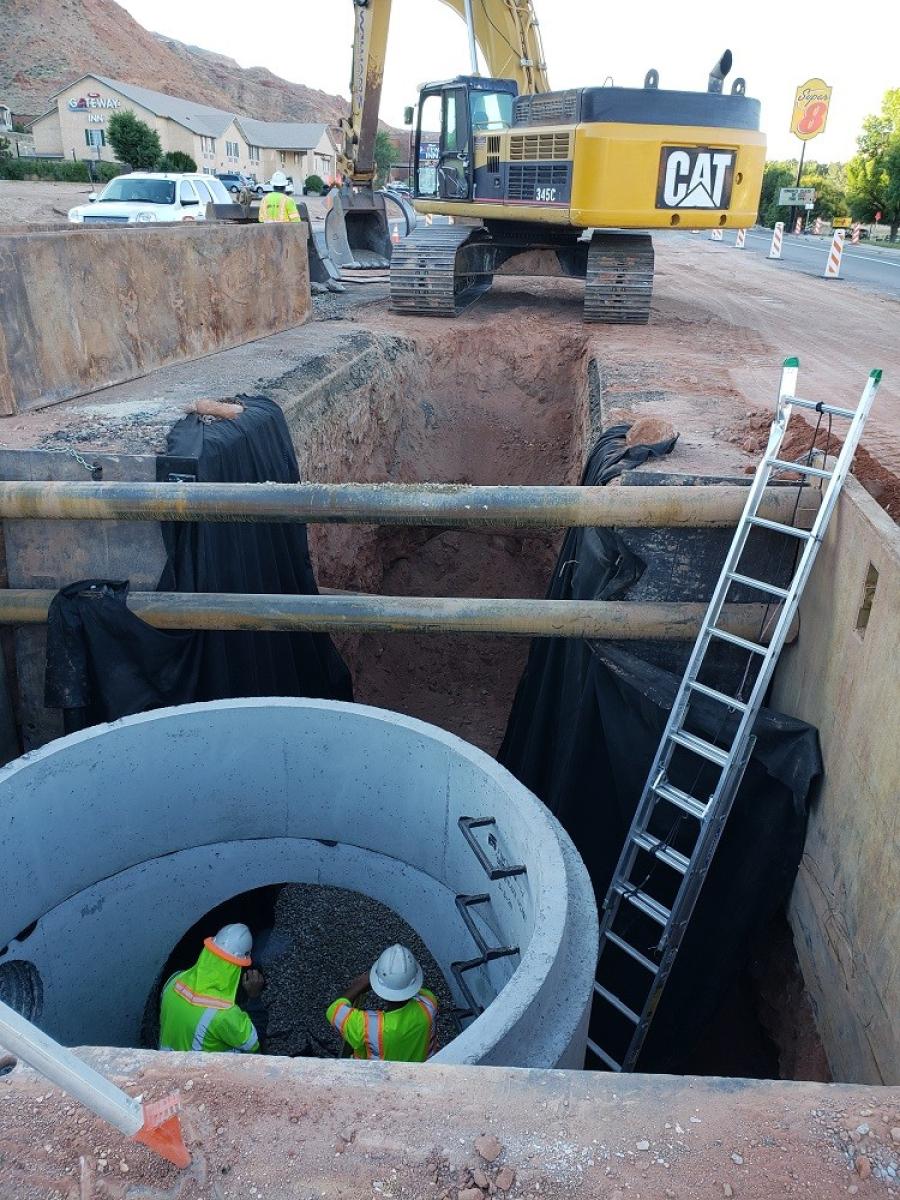 In the beginning of 2020, traffic was running above 100 percent of the annual average, Blanchard said.

"When the pandemic hit, that dropped us down to the 40 percent range," he said. "As we got this project off the ground, there was a huge reduction in tourism travel. U.S. 191 is a fairly major route. It's not a freeway, but we see a lot of commercial truck traffic. We did see a very heavy truck presence. Right now, it's up in the 90 percent range of normal traffic."

Along with truck traffic, crews must work around cyclists, pedestrians, recreation vehicles and private vehicles delivering guests to trails, the river and rock climbing locales.

The pandemic also has heightened sensitivity, making what would normally be minor hiccups into more serious issues.

"With the pandemic, any incidents that arrive, we already have people on edge," Blanchard said. "It's hard to keep our contractor within contract so we don't have additional impacts. In more of a basic commercial setting, it's easier to come in and say these businesses are shut down from 10 p.m. to early morning. In a hotel district, it is harder to make those arrangements. Obviously, the hotels are wanting to be in operation all day with guests coming and going morning and evening, and housekeeping operations during off times. I've had a couple of times where we had to relocate water lines. Any time we've had something unforeseen or ran into utilities not known about, those types of things are very difficult for these businesses to handle. There is not a good time for someone to have their water shut off."

Earlier phases of the project included building the Colorado River Bridge, widening the road north of the river, including the Courthouse Wash Bridge. This final phase south of the river is slated for completion in 2021. CEG