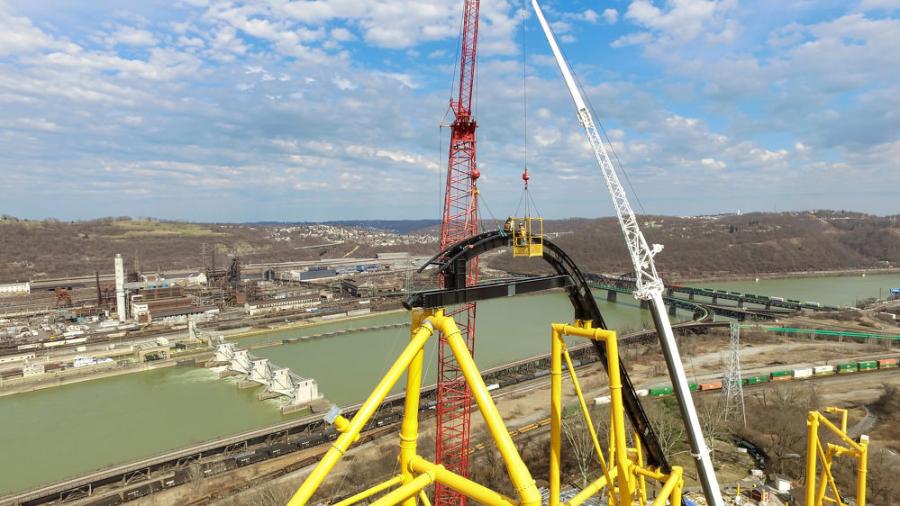 “The cranes’ biggest challenge was the weather condition,” said Keith Duell, sales representative of ALL Crane Rental of Pennsylvania LLC. “When it gets too windy, we had to shut the cranes down per manufacturer requirements.”

Records were being broken as a brand-new roller coaster rose this spring in Pittsburgh, Pa.'s Kennywood Park, which is currently in its 121st season. 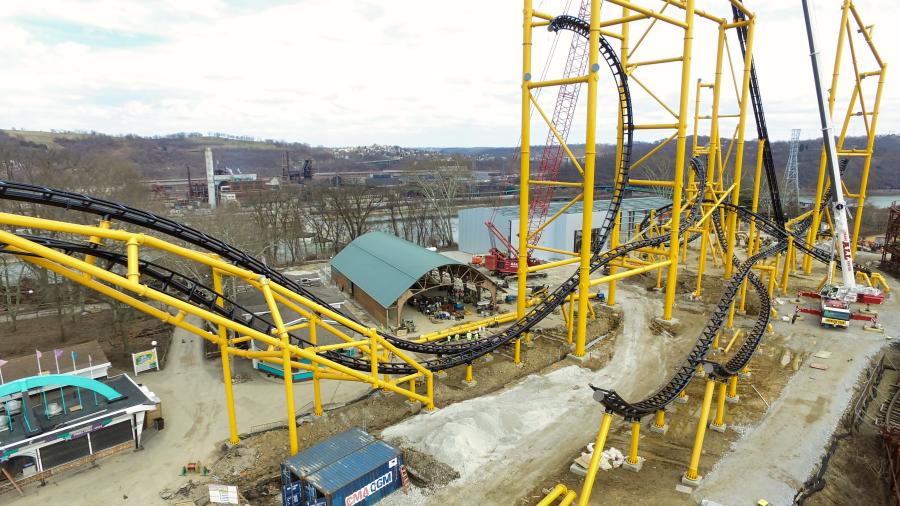 Kennywood did not disclose the name of the contractor or subcontractors for the project, but Paradise reported that cranes were obtained through ALL Crane Rental of Pennsylvania LLC.

"The cranes' biggest challenge was the weather condition," Duell said. "When it gets too windy, we had to shut the cranes down per manufacturer requirements."

The coaster's track length is 4,000 ft., with a lift hill angle of 50 degrees. During the two-minute ride, the 24 passengers will reach a top speed of 75 mph.

It officially opened to the public on July 13. On the day before the public opening, some members of the media, national contest winners and several members of the Steelers franchise were the first to ride the coaster. Current defensive end Cam Heyward was joined by Mike Wagner and John Banaszak, both members of the 1970s Steelers team that won four Super Bowl rings within six years. This was the team that earned the nickname Steel Curtain.

Although Kennywood's policy does not allow for the disclosure of financial data on capital investment, Nick Paradise, director of public relations for the park, stated that this is "the largest single-season investment in Kennywood's history," as well as that of its parent company, Palace Entertainment. 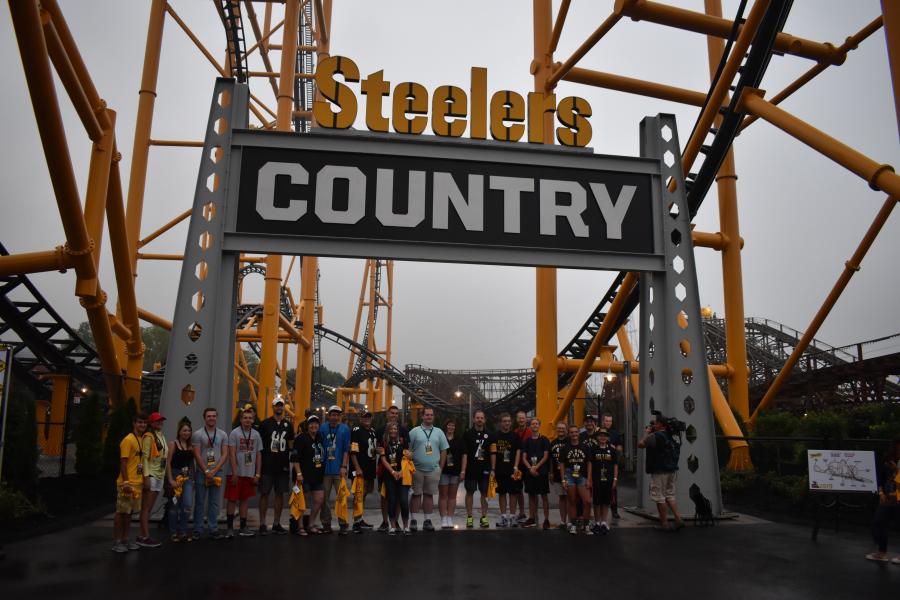 "With the innovative spirit that has always been a staple of Kennywood, we were looking to take the theme park experience to a new level in a way that would resonate with the Pittsburgh Community," said Nick Paradise, director of public relations for the park. "It became very clear that a potential partnership with the Steelers would be a one-of a-kind collaboration, where we could invite the Steelers team and fans to the Kennywood family by taking the classic game day experience that Pittsburgh Steelers fans enjoy, and bring it to life in the park. It's been a very natural fit for our brands. Our shared vision and connection to the Pittsburgh community has come together to develop this interactive and immersive themed land that will thrill both Kennywood and Steelers Fans."

Paradise explained that The Steel Curtain replaces the Log Jammer, a log flume ride of the sort that rose to popularity in the 1970s.

"While it held (and still holds) a special place in our hearts as Kennywood's first million-dollar ride and one that served guests for more than 40 years, the lifespan on the ride was coming to an end," he said. "Faced with the decision to essentially rebuild the ride or open up the space in the park for a new attraction, we decided to go the latter route and create a new, state-of-the-art attraction that even before opening has grabbed attention across the world for its ambition and the excitement it promises."

After the Log Jammer closed in September 2017, removal of the ride was completed in March 2018, at which point site clearing and pouring of the first caissons commenced for The Steel Curtain. The final piece of track was installed on June 14.

The Steel Curtain anchors Kennywood's Steelers Country, which is still being built and is described as "an immersive land that celebrates the hard-hitting heroics of the players, but with a unique twist." The park experience turns its attention to the fans, putting them at the center of the action. Exclusive merchandise, skill games and food locations — including a themed tailgating experience — continue the feeling of being at the stadium.

"We are also constructing the Steelers Experience Building, which will contain several different games and activities themed to football and the team for guests to feel what it's like to be the quarterback in the pocket on third and long, making a goal line stand, and even celebrating a touchdown!" Paradise said. "The Experience Building also contains a retail shop, all of which is being built from the ground up concurrent with coaster construction. We are also converting an existing picnic pavilion into the End Zone Café. All in all, it is a very large and ambitious project that's been on an aggressive timeline since being conceived in 2017."

Paradise explained that The Steel Curtain is a custom coaster unlike anything else in the world. 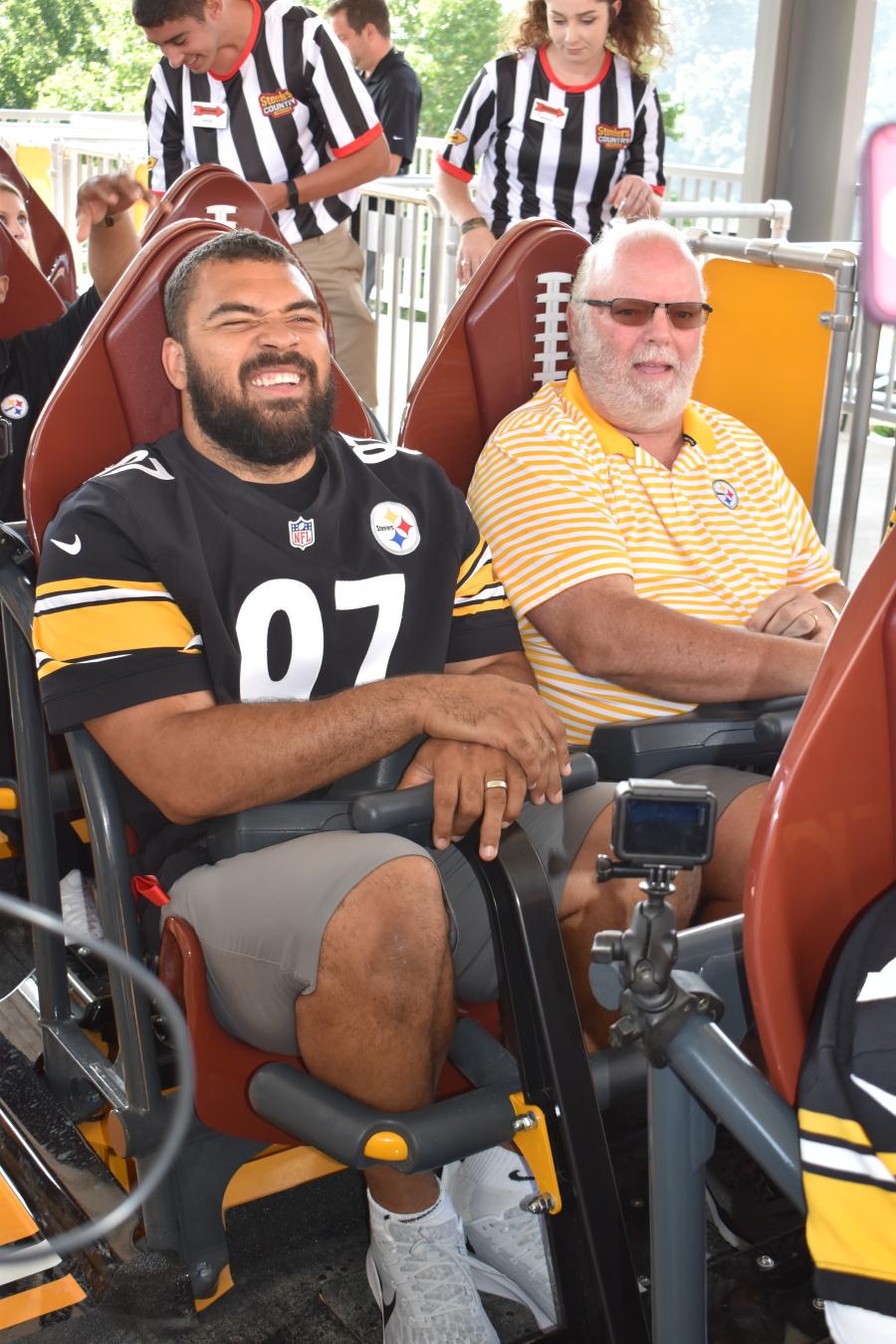 "A significant portion of the ride takes place high in the air — often more than 150 feet high," he said. "Coupling these complexities with ongoing construction on Steelers Country's other elements, the End Zone Café and Steelers Experience Building (not to mention standard park operations), there are many challenges with balancing timing between the various needs and timelines of all these projects simultaneously within a tight area (approximately three acres)."

On top of those challenges, there was the constant battle with Mother Nature.

"2018 was the wettest year on record in the Greater Pittsburgh Area, and though not quite as bad in 2019, we have certainly had stretches where snow, rain or wind have slowed efforts," Paradise said.

Paradise noted that The Steel Curtain represents an unprecedented partnership between Kennywood and the Pittsburgh Steelers.

"This is the first ever partnership between an amusement/theme park and professional sports franchise on a permanent, themed land," he said. "We have often been on the cutting edge at Kennywood and feel there's no better place to pioneer this concept than in Pittsburgh with our beloved, hometown Steelers!"

Paradise reported that The Steel Curtain was set to go through a minimum of 1,000 test runs before opening to riders. While most of the runs had weighted dummies on board, simulations were made of a wide variety of scenarios to recreate real-life conditions as accurately as possible.

"This testing is critical not only for the ride and its systems but for our staff, so they get the training repetitions and familiarity with the ride so we're ready for anything that may occur, from routine operations to worst-case scenarios," Paradise said.

According to Paradise, Kennywood began operations as a small trolley park in 1899. It is named after Mr. Anthony Kenny, who originally owned the picnic groves that later became known as Kennywood.

"Attractions included a carousel, athletic competitions, flower gardens and row-boating around the man-made lagoon — far different from what modern theme park fans expect," he said. "The park steadily grew and became known for its collection of rare, historic rides, headlined by three wooden roller coasters that date back to the 1920s and remain beloved thrills today.

In 1987, Kennywood was named a National Historic Landmark. Paradise said remains renowned today for its unparalleled ability to balance modern thrills with classic attractions and continue to be America's Finest Amusement Park.

Although exact attendance figures are not disclosed per Kennywood's company policy, Paradise reported that the park typically sees upwards of one million guests per season.