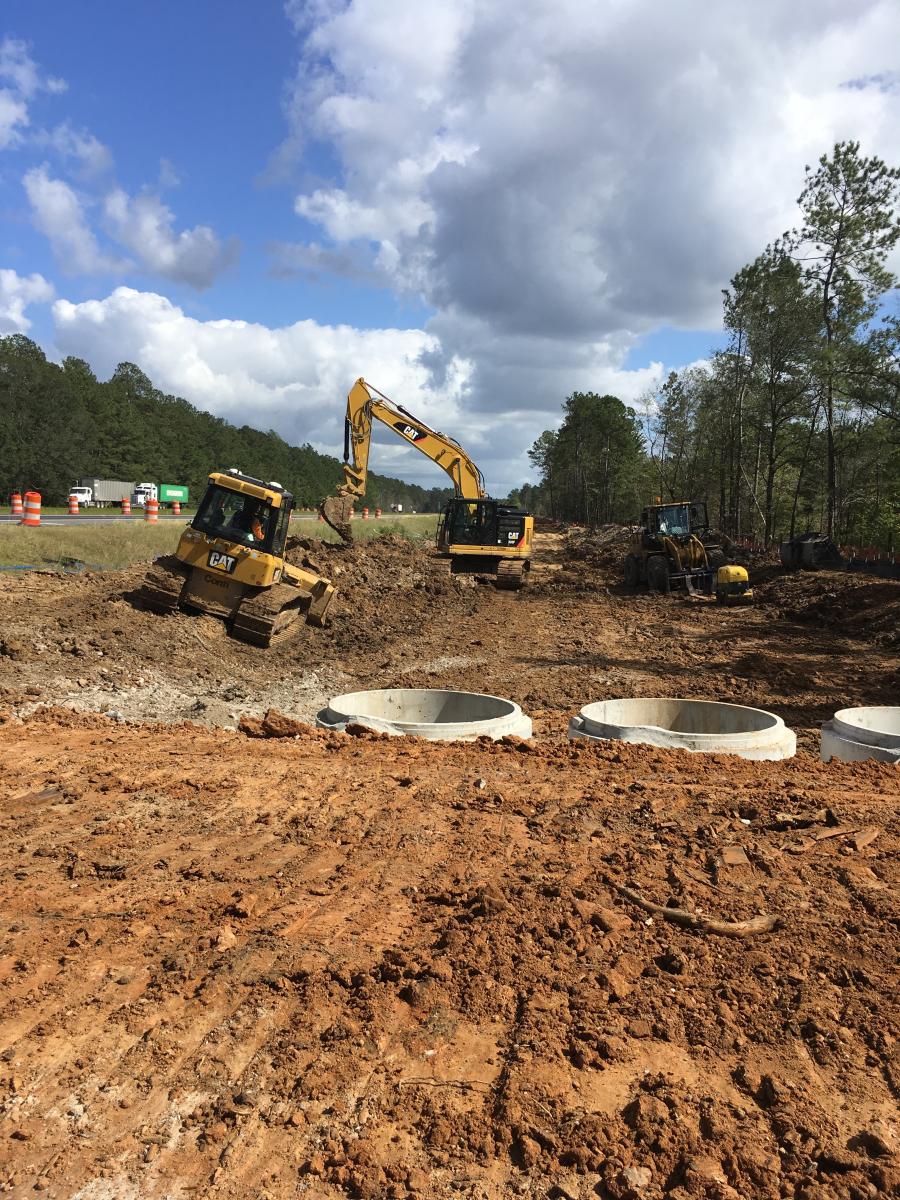 Construction crews in Berkeley County, S.C., are building a new three-leg directional interchange along I-26 that will provide direct access to the South Carolina Volvo cars manufacturing facility.

Construction crews in Berkeley County, S.C., are building a new three-leg directional interchange along I-26 that will provide direct access to the South Carolina Volvo cars manufacturing facility. The $44 million interchange is located along I-26 at mile marker 189, roughly two miles east of SC 27/Ridgeville Road and approximately 5 mi. west of Jedburg Road. It will include both at-grade and flyover ramps.

“The Volvo facility is expected to accommodate more than 4,000 employees by 2040,” said Jae Mattox, South Carolina Department of Transportation (SCDOT) program manager. “In addition to the Volvo factory itself, extensive supporting manufacturing development is expected for related suppliers or manufacturers, which could generate as much as 10,000 additional employees. As a result, the new interchange is required to accommodate the projected traffic demands.”

Mattox said the Volvo interchange will have a dramatic impact on drivers in the area.

“Based on the amount of industrial space that is available, the site could generate more than 16,000 trips during the ingress and egress peak. The new interchange will effectively manage the additional traffic demand in a safe and efficient manner.”

The interchange project itself was initiated in 2015. Mattox calls the effort extremely satisfying.

“It is very rewarding to work on a project that will have such a positive economic impact on South Carolina,” Mattox said. “The project was developed on a very rigorous schedule, which required extensive teamwork and collaboration between various public and private stakeholders.”

Daniel Burton, SCDOT resident construction engineer, said, “The I-26 Volvo Interchange will provide an alternate access to Exit 194, which should aid in alleviating congestion in the area.”

Maintaining erosion control measures to reduce impacts to wetland locations has been a concern for crews. Another challenge involves working at night to eliminate the effects to the traveling public in constructing the project.

The design-build team started on the design of the project in March 2017. Construction began by placing signage on Interstate 26 in July, with milling operations on Interstate 26 for lane shifts also taking place. Crews also placed the wetland delineation barrier during this time, and began clearing trees the following month. All work should be completed by 2019.

Mid-summer 2018 is the scheduled opening of the I-26 WB Ramp 2 to Volvo Car Drive, with substantial project completion by the following January. In the meantime, motorists traveling near the construction zones are asked to be aware of equipment and crews working in the area, and are being encouraged to comply with traffic control signs, reductions in speed limits and message board information. Drivers are asked to be aware of the new and changing traffic patterns during the project.

Right now, teams are busy performing clearing and grubbing operations. Cement stabilization activities for access, as well approach ramps, also is under way. Initial foundation activities for bridge construction for the bridges over I-26 is taking place, as well.

All design activities associated with production of the final plan sets and associated permitting have been completed. Initial traffic phasing to construct permanent/temporary shoulders along I-26 also has been wrapped up, along with the majority of clearing and grubbing activities. Design and construction activities involving the bridge approaches have been an ongoing obstacle, due to the poor existing soils within the project vicinity.

Crews also are responsible for installed traffic controls on I-26 eastbound to begin right shoulder widening.

“These lane closure are needed to perform work for removing the rumble strips that were in the existing shoulder, to alert motorists that they are running off the roadway, said Burton. However, these rumble strips were removed in order to shift traffic away from the median so the median widening work could then be completed. The right shoulder work was to increase the strength of the asphalt structure in order to carry the traffic associated with the average daily traffic for the area.”

As for the installed traffic controls on the I-26 median to begin bridge work, said Burton, “These lane closure are needed to perform work for the asphalt median work. It involved completing a four-foot permanent widening of an asphalt shoulder, along with the addition of a four-foot temporary shoulder to place temporary barrier wall on to protect the work being completed in the median for the two new overpass bridges that are being constructed.”

Day-to-day erosion control operations eliminate and control the sediment within the construction site to ensure the sediment does not leave the project limits. Clearing and grubbing operations are performed in order to haul off trees and under growth, such as brush and small shrubs. Workers remove must the organic soils, so that a structural base can then be installed to build the new road bed. This road bed is derived by calculation of structural numbers to carry a specific load or a specific volume of traffic.

A number of key tasks remain, according to Burton.

Bridge work on the project began in October.

So far, the only major weather concern was Hurricane Irma, the most intense Atlantic hurricane to strike the United States since Katrina in 2005. The storm temporarily shut down the interchange project, but crews resumed construction once given clearance to return to the job site.

Rain may continue to force delays, and the planning team has tried to take into account historical data of rainfall, and plans accordingly.

“This is not always accurate, but it does assist in the schedule of work activities,” said Burton.

Burton also said a total of 378,000 cu. yds. of borrow material will be transported to build the project.

The most time-consuming part of the work involves inspection and research associated in ensuring that the project is constructed to the contractual requirements. Main equipment that will be used to complete the work includes excavators, dozers, pavers, graders and rollers. Materials will include asphalt, borrow fill material, concrete, reinforcement steel, aggregate base material and concrete pipe.

In a release issued by SCDOT, Secretary of Transportation Christy Hall said the interchange project demonstrates how transportation supports economic development in the state.

“Volvo recognized South Carolina's favorable business climate in selecting this location, which includes an existing interstate highway and proximity to the Port of Charleston. The construction of this interchange is an important step in providing an interconnected system for driving the state's economic engine.”

General contractor Conti Enterprises,Inc. was awarded the contract to construct the new interchange, with Johnson, Mirmiran & Thompson (JMT) serving as the lead design firm. HDR, a company specializing in engineering, architecture, environmental and construction services, is also playing an active role in the project.

Laura Fulton, project engineer of HDR, said, “ It is very humbling to know that this project will not only help the Berkeley County community to increase jobs in the area, but traffic flow will be improved at not only this new interchange, but at both Exit 194 and Exit 187, as well. This will allow the traveling public and local communities that use exit 194 and exit 187 to get to their destinations in a more timely fashion.”