Three Road Projects Near Jackson, Miss., Could Get Under Way in Early 2022 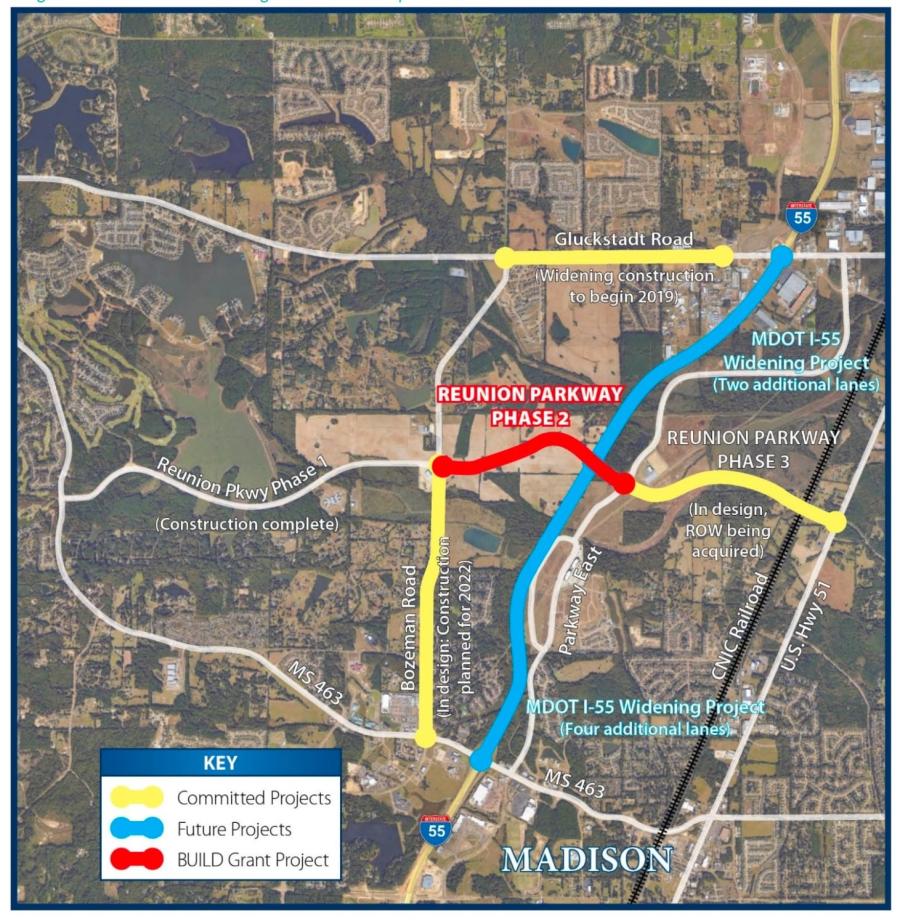 Mississippi's Madison County Board of Supervisors were told by engineers in April that construction could begin early in 2022 on the Reunion Parkway Phase II and Phase III projects, along with upgrades to Bozeman Road.

The focus of the work is adjacent to Interstate 55 just north of the town of Madison, a suburb of Jackson.

According to the Madison County Journal, the total cost of the three projects is $59.7 million with Reunion Phase III costing $10.7 million, and Phase II and Bozeman Road each expected to come in at $24.5 million.

Reunion Parkway Phase II will extend 1.2 mi. from Bozeman Road to Parkway East, including a bridge over I-55 that will carry four travel lanes, bike lanes, sidewalk and fiber optic cable placement along the extent of the project. Phase III of the roadway will eventually connect Phase II east to U.S. Highway 51.

The county has much of the funding secured for Phase II and III, including more than $10 million from appropriated by the state Legislature. Much of the money has already been spent on the projects, according to the Journal. County supervisors are still working to obtain more funding from federal and state funds and grants for the projects, the news site reported.

Ninety percent of the design work on the Phase II enterprise has been completed and submitted to the Mississippi Department of Transportation (MDOT) for review, comment and approval, said Darrion Warren, senior project manager of Jackson's Mississippi Engineering Group in comments to the news-gathering site. His firm is the design engineering firm on the Reunion Parkway Phase II.

He added that a meeting with the MDOT is needed to acquire more rights-of-way, advertising for construction bids, awarding contracts and starting the construction.

"They are continuing with their review of those plans [and] will be back in contact with us once that review is complete," Warren said to the Journal.

Warren hopes to be able to advertise for bids on Reunion Parkway Phase II between June and August. Once that happens, it typically takes two or three months to award a bid, he said.

While before the Madison County Board of Supervisors, Warren was peppered with questions, including whether he thought the construction contract could be awarded by the end of the year, to which he responded, "We don't see any issue or concern at this point that would prohibit us from, by the year's end, being able to have bids in hand."

He also told the board that he thought the Phase II project could get under way by the beginning of next year.

According to the Journal, Warren said that 12 right-of-way parcels had to be obtained before construction, some of which could be legally challenged.

"The right of way process could potentially impact the remaining items to get us to construction," he admitted. "That could possibly push the schedule back."

The environmental studies on the Phase III project have been completed, according to Brad Engles, senior associate at the Jackson offices of Stantec Engineers, which also is conducting land acquisition. He reported that his firm is currently in the process of acquiring rights of way and that his company hopes that can be resolved within the next two months.

The construction on Phase III would take a year, he said, adding that he believed signalization efforts by MDOT on U.S. 51 to accommodate the project were on target to begin in September.

Engles asked the board to sign off on a resolution in support of obtaining $4 million in federal funds for the Reunion Phase III project, leading to the supervisors giving it unanimous approval, the Journal reported.

Stan Wright of Neel-Schaffer Engineers, a South Carolina firm, told the Madison County Board of Supervisors that he is hopeful the Bozeman Road from MS 463 to Reunion Parkway, featuring a raised median in the center and a multi-use trail, could be advertised for bids by early 2022.

"We are also going to improve the intersection of Gluckstadt Road and Catlett Road, starting at Belle Terre, and going roughly 400 to 500 feet north onto Catlett," he explained. "We will be adding a turn lane."

The complex part of the project, Wright said, is the utilities relocation, noting, "If anybody has driven down this road, [they] know how many utilities companies there are. We are still looking at about a year for those [companies] to be through, maybe a little less."

The county will not be able to advertise for bids on the Bozeman Road construction until the utility line installations have been finished.

Wright explained that what his engineering firm plans to do to expedite the construction quickly is, rather than wait until the utility operations are finished, "we are going to start the advertising and bidding phase, and that way the day they are through, we hopefully can put [the] contractor who wins the low bid out there as soon as possible," according to the Journal.