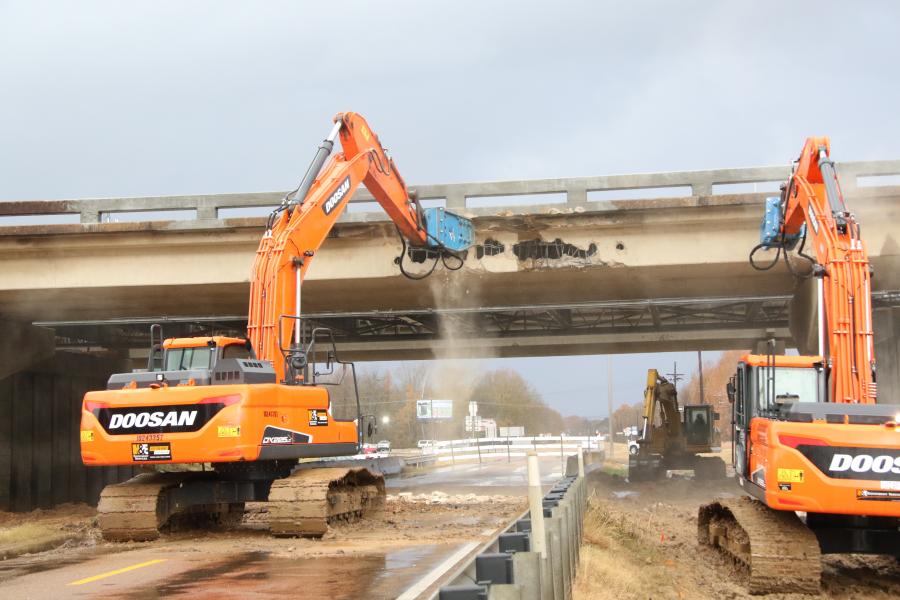 Mississippi State Route 306 was closed temporarily as crews demolished the northbound I-55 overpass.

Expected to be completed by summer 2019, a project to replace two overpasses along Interstate 55 in northwest Mississippi continues near Coldwater, Tate County. The new bridges at Exit 271 will have a 75- to 100-year life expectancy, and for motorists in the area, they arrive not a moment too soon.

"The existing bridges were built in 1959, and the bridge decks had deteriorated to a point where replacement was the only solution," said Melinda L. McGrath, executive director of the Mississippi Department of Transportation. "The structures had sufficiency ratings of 43.4 northbound and 53.7 southbound, on a 100-point scale."

The $9 million project was awarded to Joe McGee Construction Company, and the work needed to be performed at this time because maintenance costs were increasing. 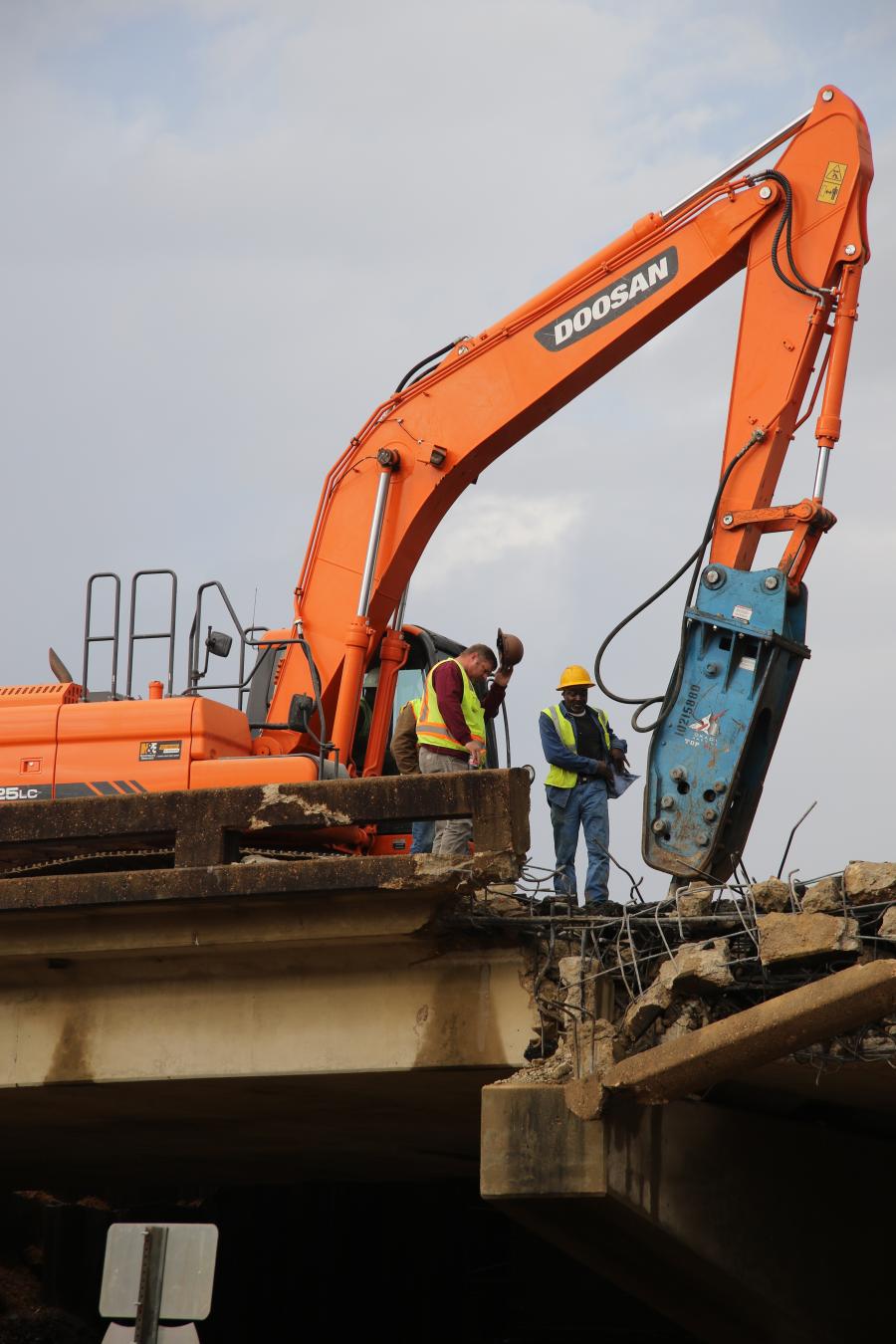 Demolition of the old northbound bridge was completed in 12 hours.

Demolition of the old northbound bridge was completed in 12 hours.

An exact date for the removal of the southbound bridge has not been announced.

Demolition of the northbound bridge took 12 hours, from 7 a.m. to 7 p.m., and was accomplished without incident.

"The contractor elected to use three excavators with hydraulic hammers," said McGrath. "They also had two additional excavators, one with a thumb attachment and one with a normal bucket.

"They began hammering the center span of the northbound bridge on the east side and progressed inward. They also hammered the end spans from the embankment at the bridges ends. Once the bridge was dropped, they proceeded to demo the end bent caps and the intermediate caps and columns."

Construction began in March 2018, and crews have made steady progress despite a less than ideal work space

"One of the biggest construction challenges faced on this project was the confined areas," said McGrath. "Constructing Phase 1 of the retaining wall, detour bridge and detour road between the existing roadways was difficult." 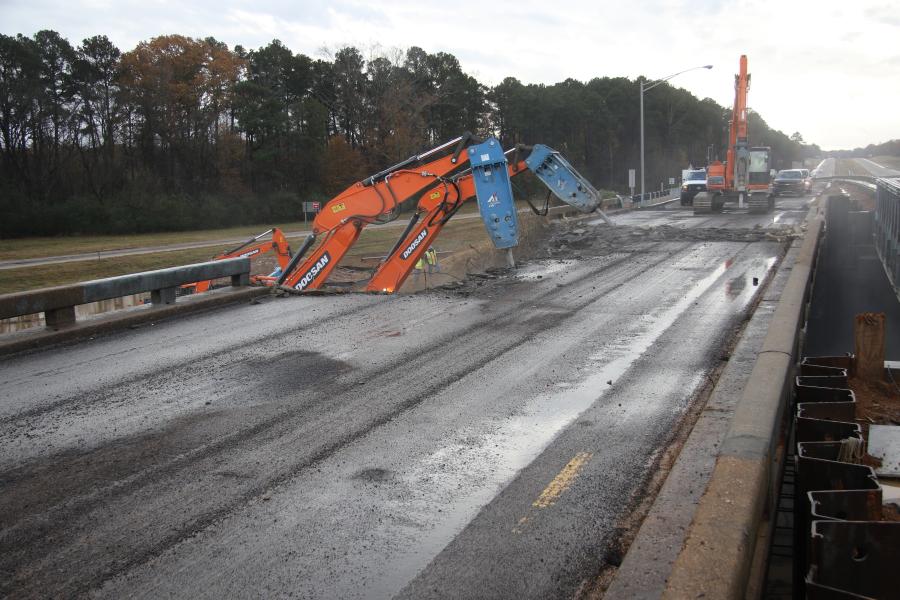 Crews are currently constructing the retaining wall, as well as the new northbound bridge.

"Initially, the contractor will drive the piling for the bridge," McGrath said. "Once this step is complete, they will install and drill out the permanent encasements for the retaining wall. They will then begin to place the W-beams in the encasements and concrete them in place. At this point they will set precast retaining wall panels and begin backfilling behind the wall.

"Next, the bridge caps will be poured and, once cured, the beams will be set. Finally, the contractor will pour the deck, which is the riding surface of the bridge, and the bridge rails. When the bridge is completed, the roadway will be paved in preparation of switching traffic."

To date, there have not been any unexpected issues, although changing weather is always a concern. Six to 12 contractor employees are on site at any given time, working Monday through Friday, and some Saturdays.

Concrete barriers are lowered into place along SR 306.

It took approximately five days to assemble the detour bridge and an additional day to launch it into place, McGrath said.

"The Acrow bridge was on a roller system, which allowed the bridge to be fully assembled and pushed from one embankment to the other," she added. "It was strapped to a dozer with a push block to protect the bridge from damage. 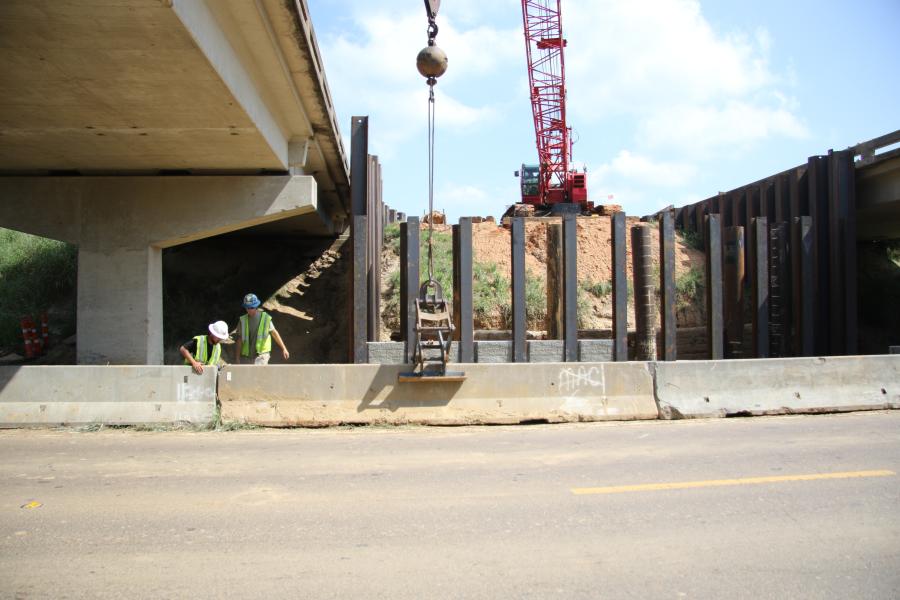 Concrete barriers are lowered into place along SR 306.

"Once the bridge was cantilevered over the highway, a crane on the opposite embankment was hooked to it to guide it into the final position on the cap."

Approximately 22,500 cu. yds. of dirt will be moved on the project. Equipment being used includes an excavator, a dozer and motorgrader for earthwork and grading. Cranes are required for bridge and retaining wall construction, with manlifts needed for various tasks.

The majority of the material on this project is either steel piling or some type of concrete. There also will be a fair amount of earthwork, along with asphalt paving.

The planning for the ongoing project has been significant.

"As of now, the most time-consuming part was the process of adapting the design of the caps to accommodate the Acrow bridge design," said McGrath. "There were a lot of changes which had to be made, which included adjusting Phase 1 lengths of the retaining wall, bridge cap, and coping joints. Also, the bridge width had to be adapted due to the location of bearings on the Acrow bridge."

Because of the impact on drivers in the area, advanced warning signs were put in place as part of the construction process. With safety a chief concern, motorists are also reminded to be on high alert for roadside workers while work is under way, and they have been encouraged to find alternate routes.

HCSS to Be Acquired by Thoma Bravo