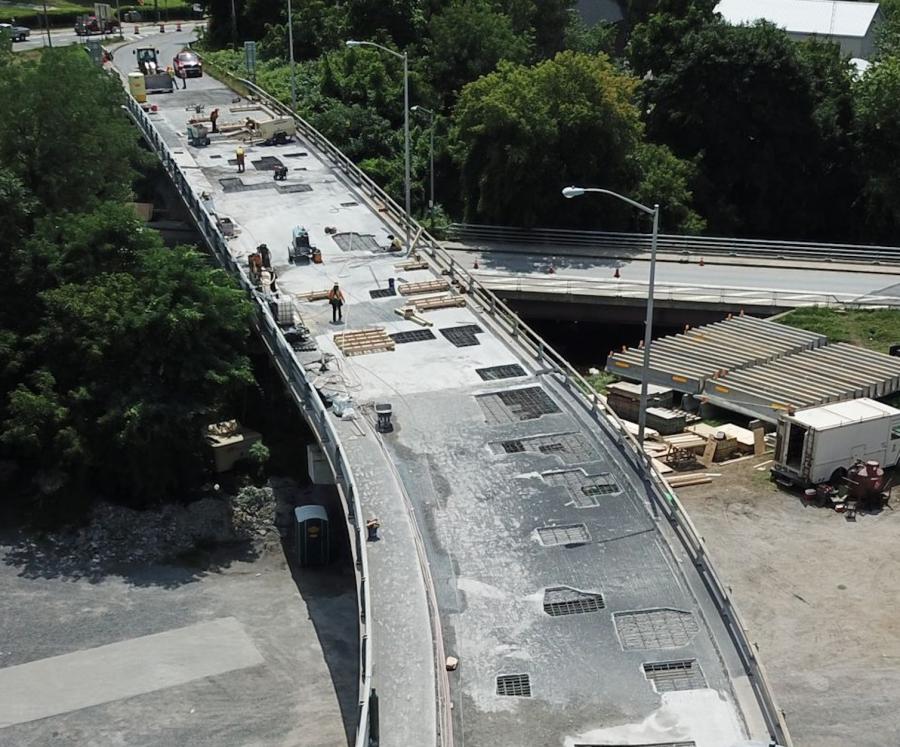 For Site #5, Route 30 over Route 67 (constructed in 1973), deck and joint headers are being replaced with armorless joints and deck spot repairs are being executed.

Tioga Construction crews have been making solid progress on the New York State Department of Transportation's (NYSDOT) $12 million project in the city of Amsterdam (Montgomery County), which is rehabilitating six bridges at four sites to deal with much needed repairs and to meet current standards.

"Overall, the project is needed to restore/repair any identified deck, drainage and substructure deficiencies to a condition of good repair; improve joint systems to protect the substructure from future deterioration; and upgrade existing railing by installing new bridge rail and new transition rail," said James J. Piccola Jr., public information officer of NYSDOT's Mohawk Valley Region. "The benefits will result in improved mobility, reliability and safety to the traveling public for years to come."

The bridges are crucial for local traffic flow, with the average daily traffic per-bridge seeing between 8,000 and 10,000 vehicles and Site #10 seeing approximately 20,000.

The work is extensive. At Site #3, Route 30 over Cleveland Avenue (built in 1969), crews are removing asbestos from the substructure; replacing the north end abutment fixed bearings; repairing the concrete on the substructure; replacing the asphalt at the beginning of the south approach with stone fill; replacing the deck joints and headers with armorless joints; placing PPC overlay on the deck and approach slabs; resealing fascia and brushcurb surfaces; and diamond grinding and sawcut grooving of new bridge deck overlay. Additionally, a $1.487 million pier rehabilitation element was added to contract.

At Site #4, Route 30 over Minaville Street (built in 1973), the work consists of substructure concrete repairs; northeast wingwall slope regarding; replacement of bridge rail and transition rail; installation of a snow fence; north bridge sidewalk and stone curb replaced with CIP concrete; asphalt removed from the bridge deck; installation of a water proof membrane; and the placement of new asphalt.

For Site #5, Route 30 over Route 67 (constructed in 1973), deck and joint headers are being replaced with armorless joints and deck spot repairs are being executed.

"The condition of deck was found to be more deteriorated than anticipated,' said Piccola Jr., "and approximately $610,000 as added to this site."

The three adjacent sites at Site #10 (all constructed in 1973) cover Route 30 over Mohawk River, Route 30 over Route 5/EW Arterial and Route 30 over Route 5/EW Arterial. Here, crews are replacing south abutment slope protection pavers with stone; placing stone scour protection at Piers 1 and ; substructure concrete repairs; installing a railroad crash wall at pier 5; removing four existing utility manholes on the bridge deck; constructing a new approach/sleeper slab at the beginning of the south bridge approach; diamond grinding and sawcut grooving of new bride deck overlay; installation of new modular joints at the beginning of the south abutment and Pier 3; installation of armorless joints at all other bridge deck joint locations; removal and replacement of all sidewalk and brushcurbs on bridge and u-walls; removal of existing fascia bumpouts and construction of new fascia bumpouts for lightpoles; replacement of existing bridge rail and fencing with new steel pedestrian rail; steel bridge rail; precast concrete median barrier; snow fencing and pedestrian fencing; replacement of all bridge rail transitions and installation of vegetation control strips; installation of new sand barrel attenuator system at NB/ER ramp gore; new navigation lighting and new highway lighting; replacement of existing overhead sign structure and other signs with ground mounted signage; sealing of all new and existing concrete on the bridge superstructure and substructure, including approach u-walls; resurfacing of the south and north approaches with asphalt; and restriping the deck to a new traffic pattern.

The project was designed by Region 2 NYSDOT Structures Group.

"The lifespan until the next major rehab is based on the deck treatment," said Piccola Jr. "Due to the size and importance of the bridges in the region, these bridges will be continually maintained."

The initiative is not without its challenges in design, engineering and construction.

"The deck for the bridge at Route 30 over Cleveland Avenue was in good condition, but exhibited wheel rutting and aggregate polishing from years of traffic," said Piccola Jr. "Since the deck was relatively solid, a Polyester polymer concrete overlay was selected due to its accelerated rate of installation, impermeability characteristics and expected longevity. The substructure concrete of the bridge had been sealed at some point in the past with an asbestos laden paint.

"All this coating was removed by the contractor," he added. "Upon its removal, additional cracking and deterioration was discovered beyond what was anticipated when the project went out to bid. This was largely due to the opaque characteristics of the coating hiding hairline cracks. As a result, additional substructure concrete repairs have been added to the job and are expected to be completed in 2022."

The bridge at Route 30 over 67 required a design and engineering update.

"During design, some spalling was noted on the bridge deck and spot repairs were called for with a rapid setting concrete," said Piccola Jr. "As the bridge went through an additional winter after design, additional deterioration occurred. With the contractor on site and able to implement lane closures, a more thorough investigation of the deck condition was able to be conducted and it was determined that a more comprehensive treatment should be selected. Working with our traffic group, a feasible detour was discovered and put into place and the contractor was able to mill the existing concrete overlay off the entire bridge deck, expose and repair a significant quantity of corroded reinforcement and overlay the entire bridge deck with an asphalt overlay that will extend the useful life of the structure a significant amount of time longer than the original treatment would have." 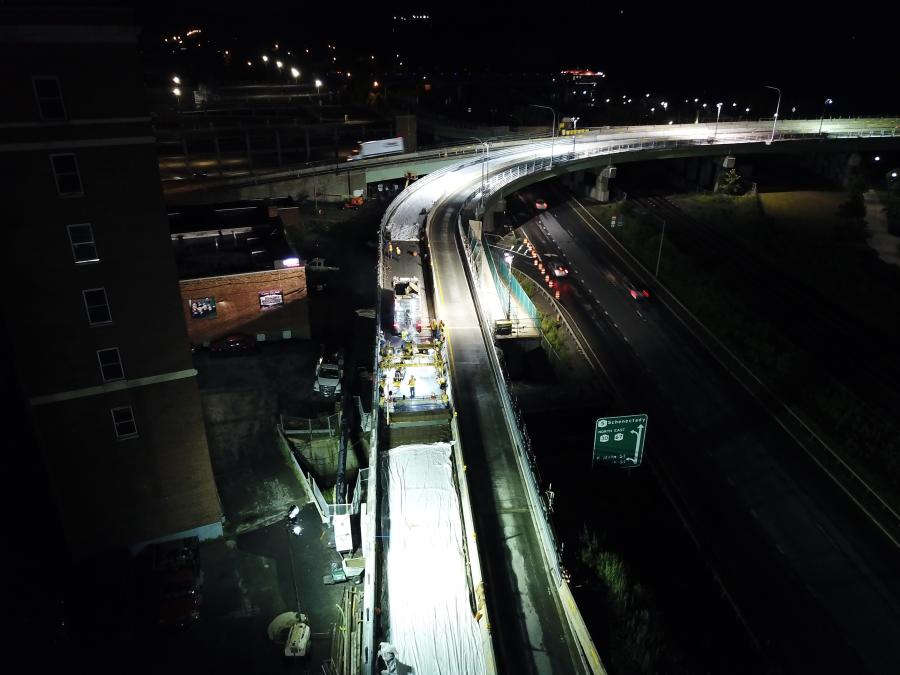 The bridge at Route 30 over Canal was placed on a "very challenging geometry, with the southbound mainline ramps [two lanes] on a tight radius of 200 feet," said Piccola Jr. "This prevented a typical work zone staging, as trucks with trailers would not be able to travel the ramp with any lane closures. Detouring trucks to another canal crossing was undesirable, as it would require an 18-mile detour. Working with our regional traffic group to create temporary traffic pattern changes in downtown Amsterdam, design was able to come up with a unique plan to allow southbound passenger vehicle traffic access to a narrow, staged work zone and southbound truck traffic was detoured to access the bridge from the northbound ramps, preventing a long detour for either group of traffic.

The bridge has a unique detail where multiple ramps converge.

The bridge is unique in that it has utility vaults located between the steel girders, with manholes in the bridge deck for access.

"This sign structure was at the end of its useful life," said Piccola Jr. "There is no standard way to install a modern overhead sign on modern bridge structures. Various options were brainstormed to try to implement a new overhead sign structure, including modifying the existing substructure bridge piers to accommodate an overhead sign structure, however none of these options proved feasible. A variety of new, ground mount style signs were included in the job to convey the necessary way finding information to the traveling public."

When newly constructed, the long span of this bridge, and its associated thermal expansion, necessitated the installation of a finger joint system, which allowed water to free flow off the bridge deck to a drainage trough below.

"In addition, the Route 30 NB left thru lane abruptly changed to a turn lane at the crest of a vertical curve, controlled by a traffic signal," he added. "The situation led to an above average number of traffic incidents in the area. Design came up with a traffic pattern change to correct the issue, dropping the left thru lane and necking NB traffic down to one lane prior to the development of a left turn lane."

The traffic management plan is proceeding as expected.

"Work zone traffic control plans were established for each bridge," said Piccola Jr.," These plans involved phasing, off-site detours and existing traffic signal modifications as necessary. The WZTC plans have worked with minor modifications. Most of the traffic is slowing down. The DOT worked with both state and local police agencies during construction."

"The main issues with this project are the unknowns that come with this type of bridge rehabilitation," said Ryan Day, Tioga's project engineer. "As work progresses, these issues are encountered and need to be addressed, which ultimately change the schedule and add time to the project. The late modified concrete is required to be placed at night. Depending how many pours we have scheduled for a week, our crews are sometimes working a mixture of day and night shifts in a particular week. Work is progressing through the winter on the Site 3 sub-structure repairs that were recently added to the contract. When weather allows, the final phase of the Site 10 deck repair will begin.

"Utility relocations will be required for the substructure repairs at Site 3," he added. "This will be coordinated by Tioga and NYSDOT with the utility owners. Tioga and NYSDOT have had a longstanding solid relationship before this project and plan to continue that in the future."

A great deal of equipment is being employed by Tioga, including a Komatsu PC 360LC-10 excavator; a Cat 930M loader; Genie SB1501 boom lifts; and a Cat 336E L excavator.

"Our company employs full-time mechanics in addition to dealer mechanics," said Day. "Our head mechanic works both on-site and at our maintenance facility in Schuyler, New York. He is on-site as needed for standard maintenance as well as repairs."

"Our dealers are very responsive and helpful with all aspects of equipment rental," said Day. "Our equipment manager, owners and project engineers have had good relationships with our dealers throughout years of working cooperatively to utilize the correct size and capacity equipment for various size projects and tasks. They're an important asset in our industry." CEG