To Protect Eagles' Nests, Part of PA Thruway to Be Built with Blasting Restrictions 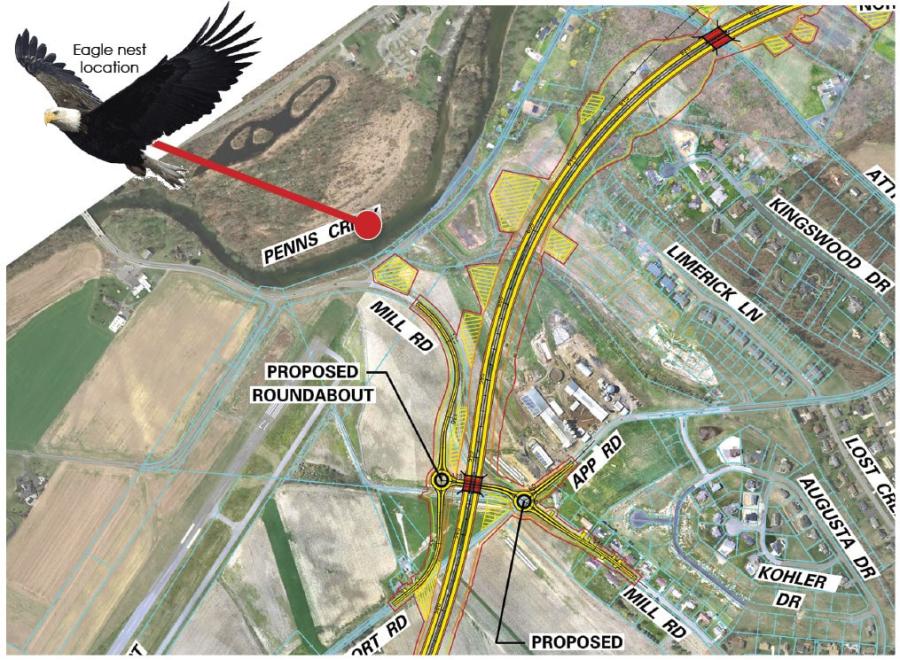 The active eagle nest and its proximity to the proposed construction of the southern section of the Central Susquehanna Valley Thruway. (Middle Susquehanna Riverkeeper Association rendering)

Construction of the southern section of the Central Susquehanna Valley Thruway (CSVT) is about to begin and, when it does, blasting will be scheduled to accommodate eagles nesting nearby.

On May 2, the Pennsylvania Department of Transportation (PennDOT) awarded a $115 million contact to Trumbull Corp. of Pittsburgh for the earthmoving on the CSVT section between the north end of the Selinsgrove bypass and a new state Route 15 interchange south of Winfield.

A notice to proceed will be given to Trumbull in a few weeks after which it will provide PennDOT with a work schedule, Matt Beck, plans engineer with the transportation agency, told PennLive.com, the digital platform for the Harrisburg Patriot-News.

That schedule will instruct Trumbull to not perform any blasting from Jan. 1 to April 30 within a half-mile of an eagles' nest on wetlands in the vicinity of the Penns Valley Airport, north of Selinsgrove.

PennLive.com noted that the directive is in keeping with U.S. Fish and Wildlife Service (FWS) guidelines recommending all activities that produce extremely loud noises be avoided within a half-mile of active nests unless greater tolerance to the activity has been proven by the eagles in the area.

The date range of the restriction is to protect eagles during the egg laying, incubation and brooding phases of their breeding season, Beck said.

If the birds are forced from the nest during cold weather the eggs could freeze, said Dan Brauning, a retired supervisor of the Pennsylvania Game Commission's wildlife diversity program. It takes 10 to 12 weeks for the eaglets to fly, and they are dependent on adults for a period after that, he explained.

Beck said a noise analysis is being performed to get a better understanding what the level will be during blasting operations and what the eagles are accustomed to with nests so close to the end of the Penns Valley Airport runway.

PennLive.com reported that if the noise level is lower than what eagles are accustomed to, and if FWS and the state Game Commission concur, blasting may be allowed in March and April.

PennDOT anticipates the closest area to the nest that will require blasting is approximately 1,800 ft., Beck said. Work along existing roads, including state Route 204/Mill Road, will be about 700 ft. from the nest, he said.

PennLive.com reported that the no-blasting period has been incorporated into the construction schedule and it will not affect the projected 2027 completion of the southern section.

Eagles Spotted in the Nest Along Penns Creek

The eagles' nest, visible from Route 204, is in a wetlands area along Penns Creek established by PennDOT three decades ago as part of a U.S. Highway 11/15 widening project.

It was brought to the attention of the transportation department by area residents and the Middle Susquehanna Riverkeeper Association, PennLive.com noted.

John Zaktansky, who lives about a mile away, said there was no activity at the nest in 2021, but two adult eagles have been observed this spring.

Brauning told the Harrisburg-based news source that it is gratifying to see the collaboration of agencies to protect the nest.

"Eagles are not the birds of pristine wilderness that we once thought," he added. "Just think about the number of nests that are literally within feet of an active highway."

Beck said it is not unusual for PennDOT to have environmental restrictions on construction projects.

He pointed to others on the southern section of the CSVT, including a tree-clearing effort to protect a bat species, and at an excavation in an approximate 1.5-mi. stretch where there is rock containing pyrite. That excavation will not be allowed during cold weather because the compound used to treat acid runoff contains water that would freeze, causing damaging to the pyrite formation, he explained.

While construction is about to begin on the southern section, work on the CSVT's northern section, including a 4,545-ft.-long bridge across the West Branch of the Susquehanna River, is nearing completion. That section, between the new U.S. 15 interchange south of Winfield, and the intersection of Routes 405-147 near Montandon, is to be opened to traffic late this summer.