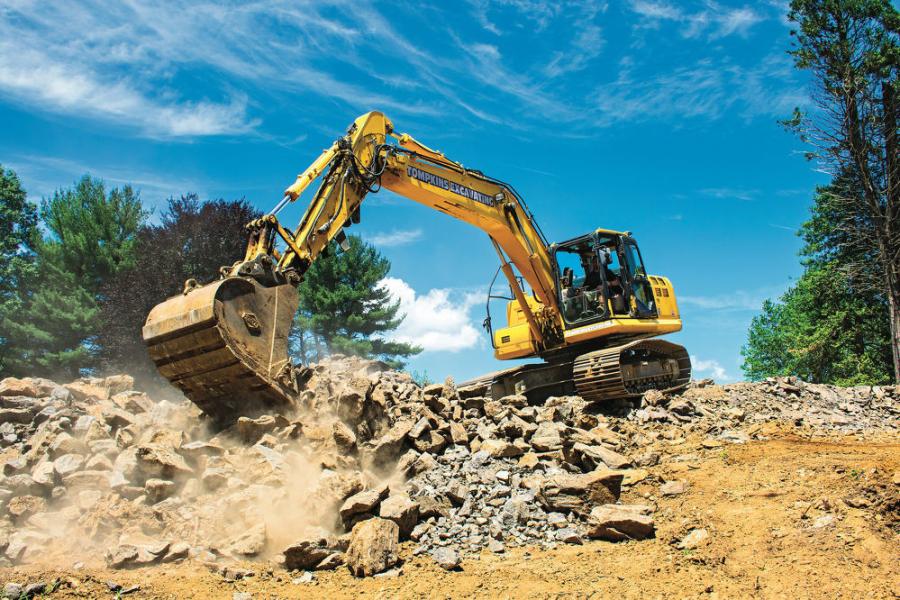 Using integrated intelligent Machine Control technology, the Komatsu PC210LCi-11 excavator cuts to grade within a tenth of an inch after removing rock from a residential site in Chappaqua, N.Y. “Whether you’re doing drainage, sewer, water, foundations or earthmoving, you dig to grade the first time,” explained Project Manager Kevin Tompkins.

As a high school student, Mark Tompkins cut lawns to earn spending money and save for college. At the time, he envisioned spending his future career in a much different field.

“I graduated from high school thinking I was going to be a chiropractor,” recalled Mark, who is secretary of Tompkins Excavating. “After a year of school, I realized that being inside all day wasn't what I wanted to do. I was still cutting lawns at the time, so I decided to invest myself into that business instead.”

Throughout the next decade, Mark grew his company, adding landscape installation and construction services. He eventually landed several grading contracts for housing developments, which led to full site development projects by the early 90s.

Since then, the Putnam Valley, N.Y.-based firm's business plan has remained unchanged. It continues to focus on commercial and residential site development in the surrounding counties, while rounding out the calendar with several landscaping projects.

“People call Mark a land sculptor,” remarked his wife, Stacey, who is President of the family company. “He is unbelievably creative. Most residential projects require his emotional, physical and mental attention because there are no set plans. Mark can envision the end product before the homeowner, and they trust him to make something beautiful.” 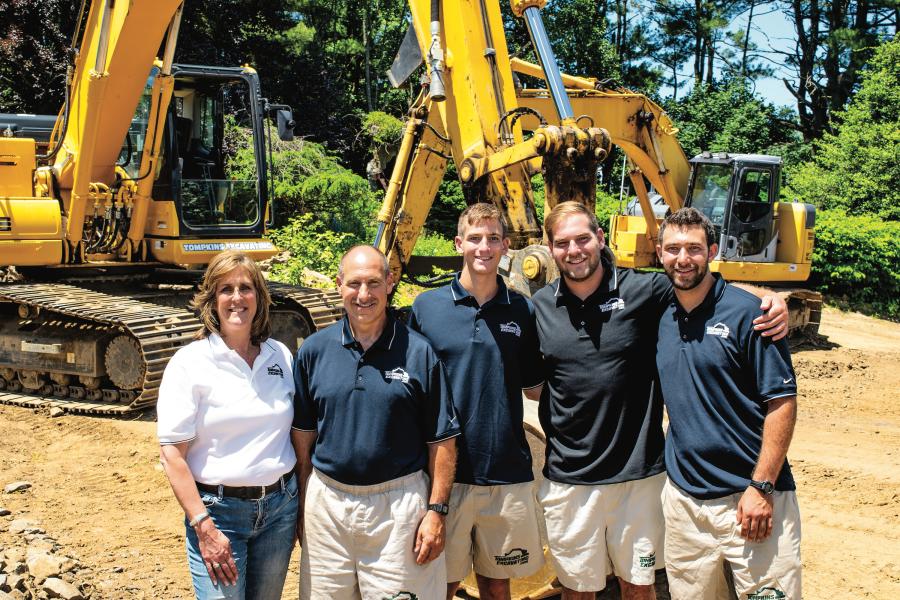 Tompkins Excavating currently employs 18 people full time, but during the summer that number increases when the couple's three sons — Kevin, Justin and Michael — catch a break from classes and help out in the business.

“We love having our sons involved in the company,” noted Stacey. “They work hard and seem to have a real interest in it.”

Tompkins Excavating has earned a reputation for quality results since taking on its first commercial contract in Yorktown Heights in 1994. The company laid the groundwork for the area's first BJ's Wholesale Club. The 200,000-sq.-ft. project required underground utility and sewer installation, as well as excavation and backfill for footings and foundation walls.

“That was a huge undertaking,” noted Mark. “At the time, we hired enough people to double our number of employees and bought several new pieces of equipment. Last year, we went back and added a gas station in the BJ's parking lot; it was interesting to see things come full circle.”

The firm has played a key role in several of the area's larger projects since then. In 2017, a shopping center renovation presented several challenges.

“The original center burned to the ground 15 years ago and then sat idle,” explained Stacey. “Our first step was clearing and demolishing the remaining infrastructure. Then we installed all new utilities, parking and drainage before a 30,000-sq.-ft. center could be built.”

A new firehouse in Peekskill, N.Y., has been a visible project in the community as well. Tompkins Excavating was responsible for the site work, excavation and backfill of the footings and foundation walls. They installed the sewer, drainage, water, utilities, parking lots, curbs and sidewalks. The 18-month assignment will be finished in the next couple of months.

Currently, the company is completing the site work and final grading for two homes on a five-acre plot in Chappaqua, N.Y. The endeavor also requires a 600-ft. road, which crews will grade before subbing out the paving.

“We've been hammering rock since our first day on-site in Chappaqua,” noted Mark. “We're very experienced with these types of residential projects. We complete between 20 to 30 of them per year and five or six larger commercial jobs. It's our niche.” 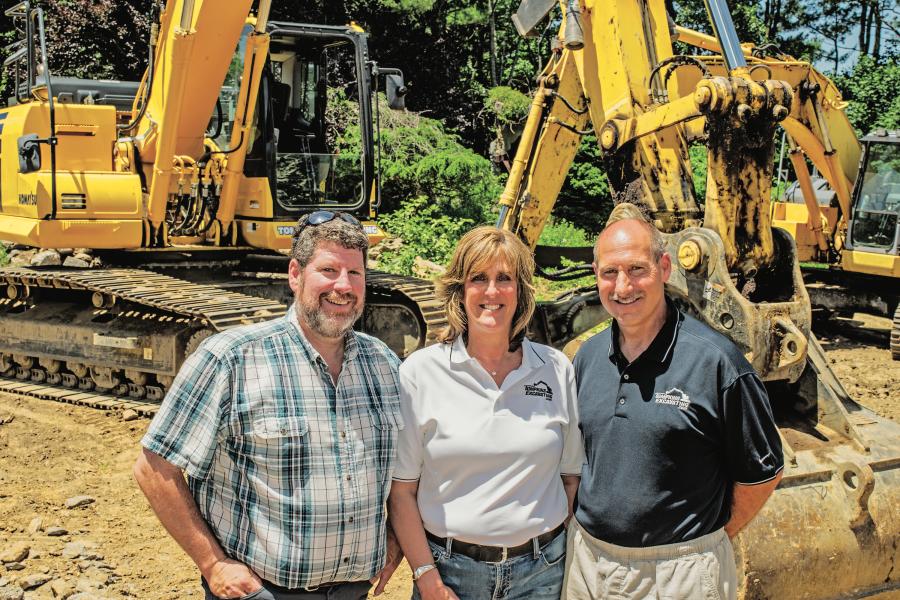 When Mark looked to buy his first piece of equipment in 1986, a Komatsu D31 dozer, he turned to Pine Bush Equipment (PBE) and Sales Rep Jim Boniface for assistance. Thirty-two years later, the relationship continues to flourish as the Tompkins have purchased between 40 and 50 machines from PBE. The business currently has 12 Komatsu excavators, three wheel loaders and a dozer in its fleet.

“Jim makes the buying process very easy for us,” said Mark. “The quality of Komatsu also keeps us coming back. The machines feel like an extension of my body when I operate them.”

In 2017, the company was in the market to buy a new excavator. After spending a year studying various options, Stacey decided to purchase the company's first intelligent Machine Control excavator, a PC210LCi-11.

“My oldest son, Kevin, really fueled the decision with his research on the machine,” shared Stacey. “The investment has certainly paid off; we can see the time- and money-saving benefits already.”

The GPS-guided excavator's capabilities have proven useful on a current project in Chappaqua. Operators dug a detention basin for water without the use of stakes. The 600-ft. stretch of road was dug and graded within a tenth of an inch using the intelligent Machine Control settings. 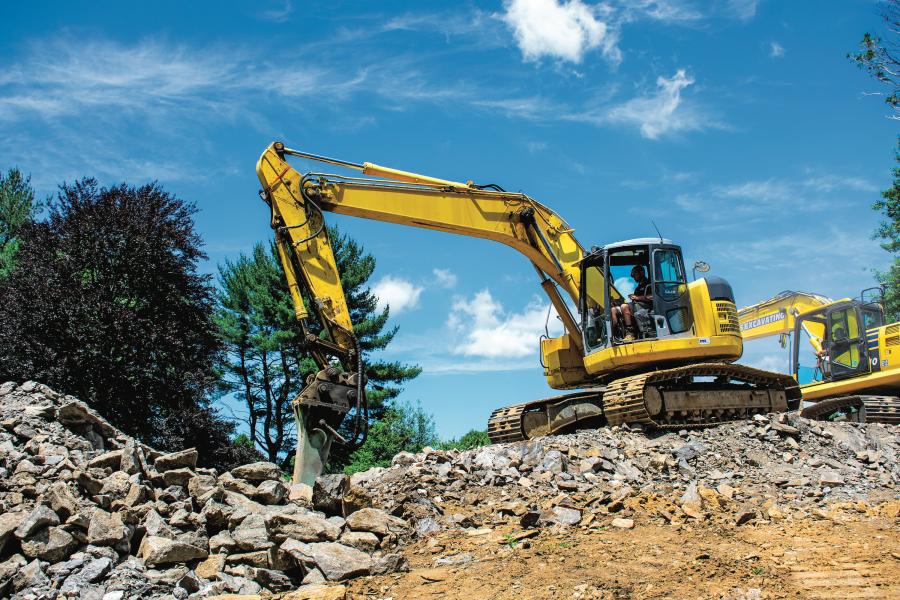 “Our intelligent Machine Control excavator does what you want it to do organically,” explained Mark. “Once the model is in the system, anybody can operate the machine. It makes a good operator great and allows us to take on more projects with the time we save.”

The Tompkins family has remained loyal to PBE for the last three decades due, in large part, to the service it provides.

“Pine Bush's service is amazing,” noted Mark. “Whenever I need something, I call Earl, one of the PBE shop technicians. He always goes the extra mile when I have a technical question and makes sure everything is done right.”

Mark values Komatsu CARE, a complimentary maintenance service program provided by PBE for three years or 2,000 hours on Tier IV machines. “I'll get a phone call letting me know when a machine needs service. This system can track the hours and location of our equipment, so PBE knows exactly where the machine is. I just let the tech know what day works best, then he shows up and does the maintenance. It's effortless.”

Stacey appreciates the simplicity of Komatsu Financial to purchase equipment. “Using Komatsu to finance a purchase is so easy. They're always our first choice. The rates are excellent, and no private bank can match what they offer.”

After 30 years, the firm is geared for success into the next generation. Residential developments will remain an important part of the business plan as the Tompkins intend to bid larger commercial projects more consistently. Having three sons interested in the family firm is a driving factor for Mark and Stacey as well.

“When most owners get near retirement they kind of fizzle out, but we're doing the opposite,” explained Stacey. “Our kids' interest in what we do gives us a reason to grow. Mark and I want to make Tompkins large enough so the boys can come in and take it to another level.”

Kevin finishes college next year and then plans to work full time for the company. His middle brother, Justin, looks to do the same when he earns his business degree.

“Right now, we focus on mid-size commercial projects, residential subdivisions and single-family homes,” mentioned Justin. “Down the road, I would like to take on larger commercial projects and grow the real estate development division of the company.”

(This article originally appeared in the Pine Bush Equipment Company Pacer Magazine, which is produced by Construction Publications, Inc.)