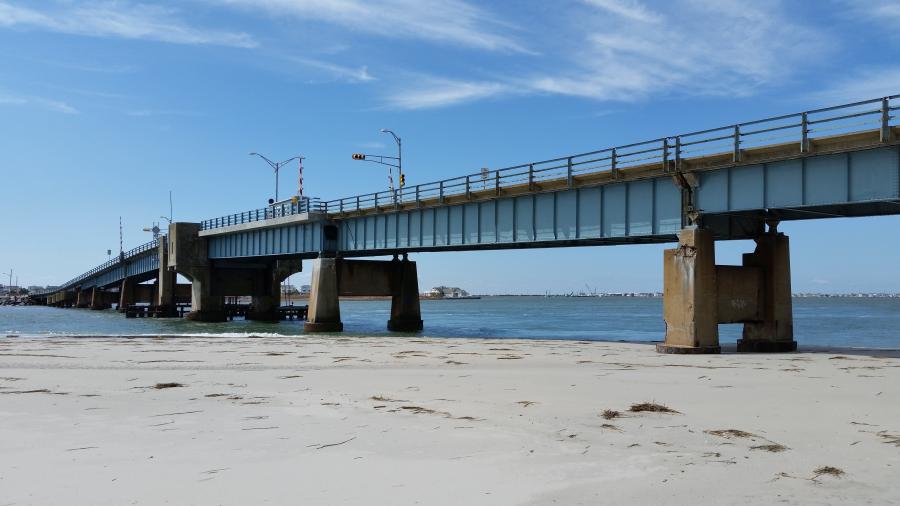 At the July 10 meeting, freeholders awarded Agate Construction Company Inc. of Clermont, N.J., an $8.6 million construction contract for the project.

The Ocean Drive (CR619) Bridge over Townsends Inlet, also referred to as the “Townsends Inlet Bridge” is set to close Sept. 17 to begin the replacement of seven spans on the Avalon side of the bridge.

According to a county release, this contract is the result of the conditions encountered last year when the bridge was closed for three months for emergency repairs to pilings at Pier 6 on the Avalon end of the bridge.

When divers inspected the bridge to gather information for what was then planned to be a substructure repair project, they discovered a steel H-pile that was broken. This discovery led to the immediate closure of the bridge and initiating emergency repairs.

The emergency repairs required the reevaluation of the planned substructure rehabilitation project, and it was determined to be more effective to completely replace the spans due to the severe deterioration of the pilings and steel superstructure within these spans.

The initial work under the contract consists of the demolishing the south abutment and the first seven spans on the Avalon end. Approximately 245 ft. of the 1,373-ft. long, 27-span bridge is slated to be replaced.

The reinforced concrete decks, steel railing and stringers will be the first items removed. The concrete and steel pilings will either be removed entirely or removed to a depth of at least 3 ft. below the mud line.

Once the old pilings have been removed, the riprap stone that has been placed over the years since 1962 will need to be relocated from the area where the new piers are to be constructed.

The riprap stone was placed to reduce the erosion of the inlet bottom near the bridge. It is imperative that the riprap stones be removed from the area because the new piers will require installing 60-in. diameter piles up to 157 ft. in length.

Four new spans will be replacing the seven spans being demolished. Three of the new spans will be consist of prestressed concrete beams, and the fourth span will contain steel stringers to facilitate the connection into the existing bridge.

The new concrete beam spans will be longer than the old 35-ft. steel stringer spans, varying in length from 75 to 100 ft.

The southern end of the bridge is a favorite fishing spot, though prohibited due to safety concerns associated with the existing narrow walkways.

While the roadway on the new spans will be the same as the existing bridge, the sidewalks will be increased from 2 to 6 ft. wide. The new south abutment is to be relocated just to the south of the existing abutment.

Agate Construction anticipates having the bridge demolished and ready for the installation of the piers in November. They are expecting beginning to set the new beams and stringers sometime in January.

The firm anticipates working, when efficient, two shifts per day from 6 a.m. to 10 p.m. and, if necessary, some Saturdays to complete the project.

To facilitate the construction, Ocean Drive in Avalon will be closed from the southern end of the seawall near Fourth Avenue to the Townsends Inlet Bridge, and this area will be used as staging for the storage of equipment and materials for the project.

Most of the demolition and construction activity will be performed using floating equipment. However, the construction is occurring outside the navigational channel and therefore will not interfere with marine traffic.

The project required various permits from the Army Corps of Engineers and state Department of Environmental Protection (NJDEP) along with approvals from Coast Guard. The project has an in-water work restriction that runs from March 1 until June 30, therefore the contractor needs to complete all work in the water by Feb. 28, 2019.

As part of NJDEP permit conditions, the county is required to mitigate the impacts to wetlands and shellfish habitat. Thus, 1,265 sq. ft. of wetlands mitigation credits, worth $15,225, were purchased from the Stipson's Island Mitigation Bank, owned and operated by Evergreen Environmental LLC, Wayne, Pa., and another $1,880 is to go to NJDEP Shellfish Mitigation Habitat account.

NJDEP Historic Presentation Office also noted that the Townsends Inlet Bridge is eligible for listing on the New Jersey and National Registers of Historic Places because the bridge is a monument to the Depression-era New Deal Programs to improve America's infrastructure and it is a well-preserved representative example of the most common movable bridge type in the Jersey Shore region.

Due to its historical significance, the existing conditions of the bridge had to be photographed and documented in the Historic American Engineering Record standards, and an interpretive sign installed that relates the significance of the Townsends Inlet Bridge.

The documentation had to be completed and approved by the Historic Preservation Office before the start of work.

The Lebanon office of Greenman-Pedersen Inc. has provided the engineering services for the design of this project. Remington & Vernick Engineers Cherry Hill, N.J., is providing the construction oversight of the project.

The project is being funded by the county, and a $1-million grant from the Local Bridge Future Needs program of the state Transportation Trust Fund.

Last spring, Agate Construction completed the Priority Structural Repairs to the 96th Street Bridge between Stone Harbor and Middle Township for the county on time and within budget.

The replacement of the seven spans dramatically increases the useful life of the existing bridge. However, the bridge will still be considered functionally obsolete due to its narrow roadway width and structurally deficient due to the 15-ton weight restriction. The bridge was designed in 1939 based upon a 17.5-ton truck.

While Agate Construction is working on the southern end of the bridge, other construction projects on the bridge will be occurring concurrently.

Thomas Barry Marine Construction of South Dennis is scheduled to complete the bridge railing replacement project that involves the section of the bridge on the east side from the north abutment in Sea Isle City to the tollhouse span.

Delta Line Construction Company, Egg Harbor Township, will be replacing the submarine cable that provides power and communications to the bridge and traffic signal equipment on the south side of the movable span.