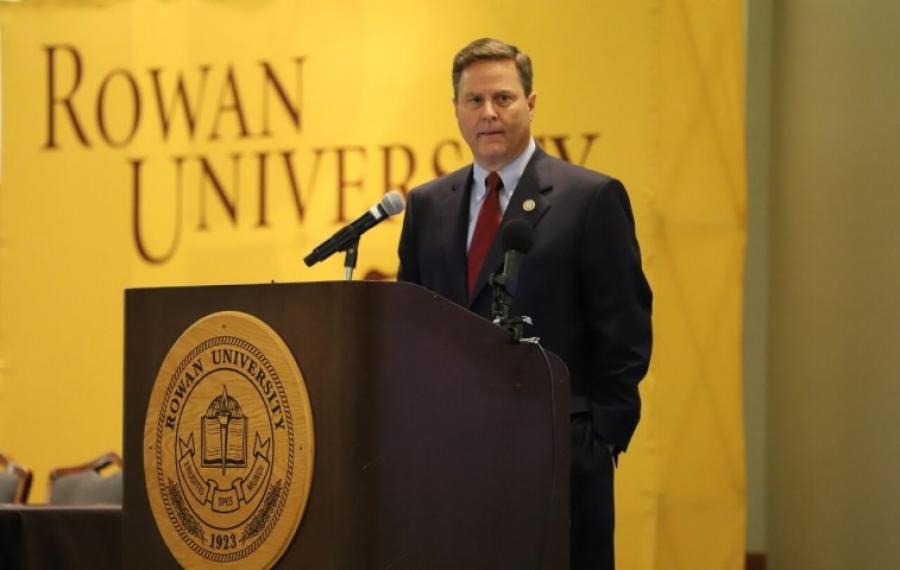 Launched in 2016, Rowan's fully online program was created to bring the classroom to journeypersons and other industry professionals seeking advancement to project management level positions and beyond.

“We were wholly embraced by Rowan to set up this degree program. NABTU is all about creating pathways, and Rowan is helping us open more career pathways for our building trades members — particularly those interested in earning bachelor degrees,” said McGarvey.

McGarvey also applauded the leadership of Norcross, Sweeney, and Bill Mullen, president of New Jersey's Building and Construction Trade Council, and pointed out the importance of national and local leaders knowing firsthand what opportunities a building trades education can provide.

Norcross and Sweeney, who both enjoyed trade union careers before entering politics, praised NABTU for funding the new scholarship program, which is designed to cover $7,200 in Rowan tuition for one member of each of the 14 trade unions NABTU represents.

They noted that a career path in trade unions often starts with an apprenticeship that leads to status as a journeyperson.

“The value of this program is that, in the event that you become a journeyman, you can become a project manager,” said Norcross, a former union electrician.

Sweeney, who joined the ironworkers union in 1977 and gained journeyman status in 1980, credited Rowan's participation in the state's Work and Learn Consortium and its commitment to organized labor in the ongoing construction of Rowan Boulevard, a $400 million public-private partnership, and vast other recent construction including buildings for the colleges of Engineering and Business.

He noted that there are still opportunities afforded by the trades through talent and hard work but said a degree today creates even more advancement options.

“Rowan has been a leader when it comes to getting rid of this all-or-nothing phenomenon in higher education, where you're either in school or working,” Sweeney said. “The goal is about getting the credits you need for the job you want.”

Rowan's Bachelor of Arts in Construction Management was created in cooperation with NABTU and is offered through the University's Division of Global Learning & Partnerships.

“Today, workers in the building trades are busier than ever and it is imperative that higher education finds more creative ways to reach those busy adults,” said Dr. Horacio Sosa, vice president of the Division of Global Learning & Partnerships.

The conference in Rowan's Eynon Ballroom was attended by more than 100 national, state and local labor leaders.