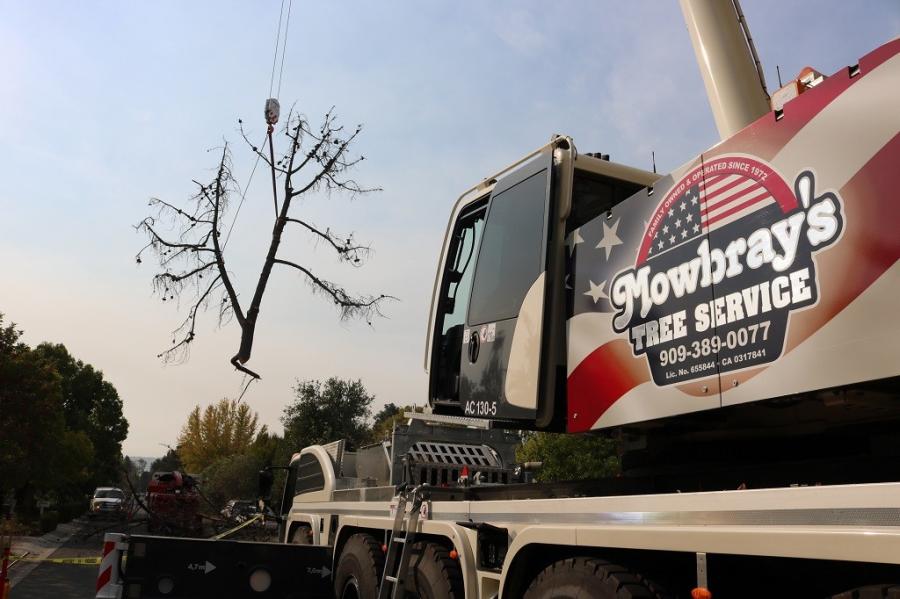 When a tree has become too hazardous to climb and/or work by conventional means, a crane is used to mitigate hazards to the climbing arborist.

An estimated 112 million dead trees perilously populate the Sierra Nevada Mountains. The combination of unprecedented drought over the past four years coupled with significant bark beetle infestation has decimated trees throughout the mountain range in California. The severity of the problem pressed Gov. Jerry Brown of California to issue an emergency proclamation in October of 2015 for the removal of dead/dying trees in high hazard zones.

Local, state and federal agencies are in a rush to remove the trees, as the drought-stricken trees serve as kindling for the quick spread of forest fires. However, “It's slow and difficult work, as many of these trees are unsafe to climb for removal,” said Ricky Mowbray, crane operation supervisor of Mowbray's Tree Service of San Bernardino, Calif. Jesse Sanchez, director of safety of Mowbray's Tree Service, added, “Dead trees create various hazards, as they are weak and have the potential to fail more easily than a live tree. The longer a dead tree stands, the more unstable it becomes.”

Due to these challenges, few tree service contractors are answering the call for tree removal in high hazard zones. It's painstaking work that requires attention to detail and sometimes one or more days to safely remove a single tree.

“If conventional tactics such as tree climbing and tying off section by section cannot be used, then we move to 100-ft. spider lifts,” said Mowbray. “Tree size ranges from 30 to 240 ft. tall,” which poses a problem for trees too tall for the spider lifts to be safely used.

Nearly aligning with the beginning of the drought cycle in California, Mowbray's Tree Service began renting cranes for removal of dead trees. When a tree has become too hazardous to climb and/or work by conventional means, a crane is used to mitigate hazards to the climbing arborist, explained Sanchez.

“We have found it to be much safer, easier and more efficient to remove those trees using cranes,” added Mowbray.

The success achieved through renting cranes for dead tree removal has led Mowbray's Trees Service to the recent purchase of four Demag all terrain cranes, one acquired in December of 2016 and three more in mid-2017.

Today, the company is nearly 700 employees strong, deployed mainly along the west coast with a fleet of 800 vehicles plus the four Demag cranes. Sometimes opportunities take company workers to other states.

“In late summer, we sent 25 grapple trucks to the east coast to clear vegetation from hurricane damage for our utility customers,” said Mowbray.

By far the main emphasis is clearing dead and distressed trees from the Sierra Nevada Mountains. Over the last four years, Mowbray's Tree Service has perfected its use of cranes to increase tree removal efficiency. With such a heavy, long-term workload demand, company officials saw the need for owning crane equipment.

Mowbray said one reason for standardizing on the Demag cranes is maneuverability, as operators easily fit the cranes in tight spots.

Excelling in Safety and Productivity

Crane reach and capacity enable workers to set up in one location and take down multiple trees.

“Using the Demag cranes has allowed us to remove as many as 10-15 trees in a day, whereas with other methods, we would average about one tree a day,” said Mowbray. “However, even with the cranes, we still have those jobs where we have to work at a 185-ft. radius and it takes a day or two to remove a tree.”

Stephanie Wood, director of product safety of Terex Cranes, advised that these are special circumstances for which Mowbray's Tree Service can use the cranes for tree removal applications.

“Cranes are designed to pick freely suspended loads and lift them into position,” she said. “However, OSHA [Occupational Safety and Health Administration] and ASME [The American Society of Mechanical Engineers] both address applications in which a crane can be safely used for work such as tree removal and how to properly lift personnel in these applications.”

When there is no safe way to climb the tree, Mowbray's Tree Service uses the crane to lift the worker into position. Having the cranes has made it safe and easier to get workers into those trees.

“The tree canopy makes it dangerous to use a platform, so we use the hook block to lift the worker when there is no other way to safely get to the tree. We use a double tie-off method, positioning a lanyard through the hook block and tie-in the sling made for climbing above the hook on the line,” Mowbray said.

The standards typically call for a platform to safely lift personnel at the job site, but this often is not possible when working in the high hazard zones. Therefore, a special variance has been granted to lift a worker into the tree in this manner.

“We have found it advantageous to have a person who has spent time in the tree operating the crane. It helps to have an experienced person in the seat to help determine sling placement and if the crane is able to handle the load,” Mowbray said.

Sanchez echoed Mowbray's comments and mentioned that the company has added special training programs for working with the cranes.

Company foremen use a green weight load chart for determining load weight. The pre-lift plan includes measuring the length and diameter of the tree section to be cut to calculate its weight and make sure it falls within the crane's rated capacity at the boom length and radius.

“To be safe, we aim for half the rated capacity, and dead trees weigh less than 'live-tree' weights in the chart,” said Mowbray.

Mowbray cited many Demag features as beneficial for working in the Sierra Nevada Mountain Range with the most significant for the application being the hydraulic luffing jib.

“In the past, if we needed an offset to the jib, we would set it before we put it up in the air. If it wasn't right, we'd have to boom down to change the angle. Now with the hydraulic jib, we can set the offset in the air, which helps us to get to more trees in one day. It's a real game changer.”

Working in mountain road conditions and tight spots, Mowbray's Tree Service has grown to appreciate the IC-1 Plus control system. It calculates lifting capacities in real-time for every position of the boom, subject to the slewing angle.

“Calculating lifting capacity based on boom positioning versus a 360-degree capacity allows Mowbray's Tree Service to maximize the crane's lifting capacity with minimum counterweight by setting up over the outriggers,” said Kuhlman.

Equally as important to Mowbray is the ability to choose between three outrigger positions.

“Having asymmetrical outrigger positioning on the AC 160-5 and AC 130-5 gives us more flexibility with crane positioning, which is critical in this line of work,” he said.

Being new to crane operation, Mowbray values some of the automation features that come standard. The machine offers automatic outrigger leveling, which helps save time when working on uneven ground.

“And IC-1 Plus measures ground pressures, which helps us to know that we have correct pressure on all four corners,” said Mowbray.

“We use two-way communication between the operator and the man in the tree, but it is sometimes necessary for the operator to see where they are working,” Mowbray said.

The Demag cranes used for high hazard zones tree removal have not only increased worker safety for Mowbray's Tree service but also have improved overall efficiency and productivity.

“The cranes add a whole new approach to our operation,” said Sanchez. “In the four years of using cranes, we have had no serious incidents or accidents. This is a testament to crane use and the experience of our operators and arborists.”

While owning the four Demag cranes has significantly improved operating efficiency and safety for the company, Mowbray is eyeing other potential business opportunities with the cranes.

“Working for utility companies, we can easily help set poles for our customers, which may open up new doors for us,” he said.