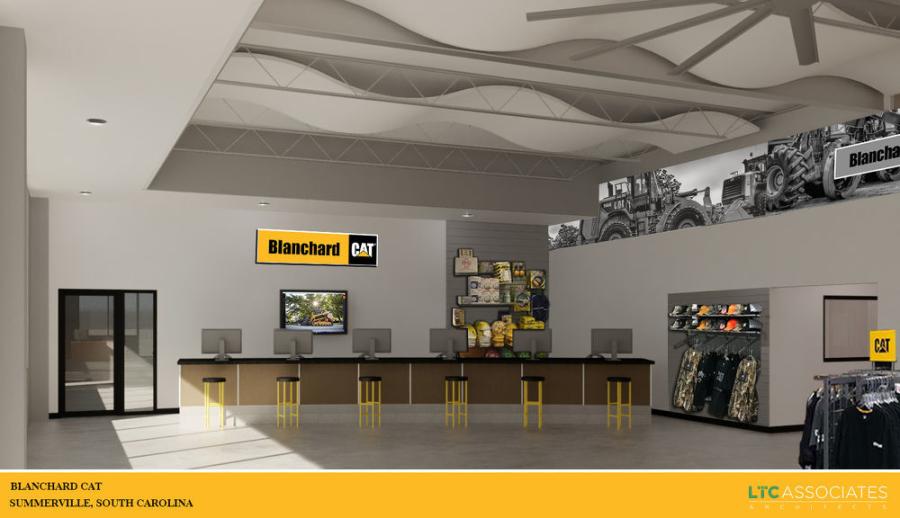 “We knew that we needed to do things to enhance our customer experience in Summerville so that when they walk through the door, they are greeted with a world-class customer retail facility,” said Rozier Blanchard, Vice President of Machine Sales.

In the construction equipment business, staying on top in the marketplace means working hard and investing wisely to remain there. The executives that operate the leading companies are always thinking ahead and planning for the future.

That is certainly true for Rozier and Boyd Blanchard, who alongside their father Joe, run South Carolina's highly successful Blanchard Machinery Company and its 12 branches across the Palmetto State. 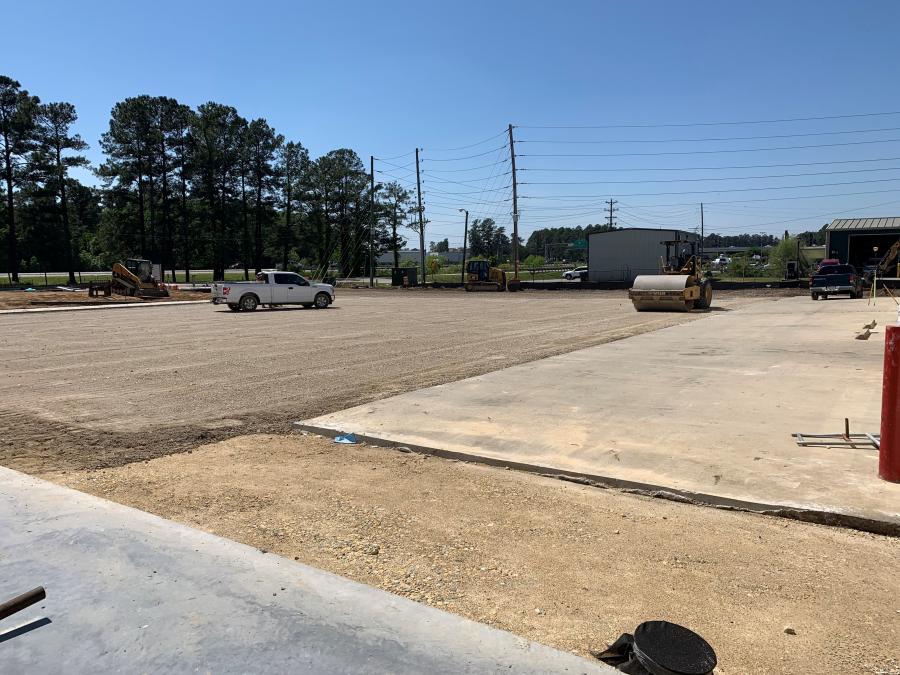 As the only certified Cat equipment dealer in South Carolina, Blanchard Machinery has had a significant role in the tremendous growth and construction in the state over the past few decades — a growth that is trending upward at an exponential rate.

South Carolina has positioned itself as an attractive destination for people and companies to relocate to from other areas of the country. As a result, a wave of new construction has led Blanchard Machinery to better serve contractors through its branches in Greenville, Simpsonville, Spartanburg, Rock Hill, Haile Gold Mine, Columbia Main, Columbia Compact/Rental, Florence, Myrtle Beach, Hilton Head, Walterboro and Summerville, the latter of which serves the burgeoning Charleston market.

Blanchard Machinery's Summerville location is booming as the area it serves is undergoing a surge in new home starts and manufacturing construction, the latter of which includes Volvo, Mercedes, Boeing and Google facilities in the low country to go along with the expansion of the South Carolina Port.

The Summerville branch, in addition to energy and rental businesses, stocks Cat and other manufacturers complete line of compact and heavy construction, paving, forestry and agriculture equipment.

As a result of its growth and the company's commitment to providing world class customer support, the Summerville branch began an extensive renovation project in 2020 designed to enhance the Blanchard Machinery customer experience by providing a modern facility.

"We knew that we needed to do things to enhance our customer experience in Summerville so that when they walk through the door, they are greeted with a world-class customer retail facility," said Rozier Blanchard, vice president of machine sales. "By putting money back into Summerville, we will enhance our footprint and our capabilities. That includes doubling our parts warehouse capacity, growing a new hydraulics hose shop space by 60 percent and adding four service bays. We are also going to store more new, used and rental equipment and develop a new area where customers can get on a tractor and push around some dirt to get a feel for the machines if we are unable to take it out to a job site for them."

The company plans to complete the multi-million-dollar expansion in November.

"When it is done, we believe Summerville is going to be the premier equipment dealership facility in the Southeast and it's just the first renovation in a heavy capital investment plan that we have over the next five to ten years across all our facilities," said Boyd Blanchard, vice president of product support at the family-owned Blanchard Machinery.

The expansion will bring the total number of service bays to 24 at the Summerville location, with 12 bays in the main shop, four in the rental service area and eight in the truck center.

For years, a major component of the company's Summerville operation has been its hydraulics services business. The new expansion will add 60 percent more capacity to the hydraulic hose shop and triple the number of hose parts stocked, a move that illustrates the dealership's commitment to establishing a true one-stop shop for its customers' hydraulics needs.

"Whether its Cat, or any other OEM, we are going to have the ability to build a high-quality hose at a competitive price and do so in a quick-turnaround time," said Boyd.

The renovation project has already led to the construction of an additional acre of concrete at the Summerville site to improve Blanchard Machinery's contamination control and provide a clean area for customers to pick up and drop off their machines for service.

"We are also continually growing our rental fleet at that location and the new rental store will be located in its own renovated building, one that serves as our energy facility," he added.

The increased capacity of the branch is squarely focused on the layout and functionality of the facility, although Boyd indicated they are always looking to add qualified technicians to the team.

But another key goal of the dealership upgrade is to create a better, cleaner working environment for Summerville's approximately 120 employees, while also increasing productivity and ensuring staff retention and recruitment.

"This upgrade of the branch is two-fold in that it ensures that our customers know that the expansions we are making are done to serve them, and for our employees, we are redoing all the locker rooms, bathrooms and breakrooms and adding another training facility," he added.

The company emphasized that the new renovations will help it build upon the fact that it already has the largest on-the-shelf parts inventory in South Carolina. To go along with the 12 physical locations that Blanchard has, there also are more than 30 parts drop boxes located throughout the state to help serve customers with further drive times.

"Parts availability is something that always concerns customers in this business and that has allowed us to differentiate ourselves from other companies," Rozier said. "What we have learned is that a customer is okay waiting a week for parts from some manufacturers, but they are not okay with waiting that long for a Cat part."

"[Blanchard Machinery] can get a majority of our parts to a customer within a 24-hour window by utilizing our overnight parts shuttle to get what they need from another branch as well as Cat's Parts Depots," he said. "What this expansion will allow us to do is be able to stock more of the right parts by understanding what machines are running in the Charleston area. Having more on-shelf orders as well as having the ability to use the Cat Depot and our internal parts shuttle really separates us from our competitors."

The branch manager of the Blanchard Machinery operation in Summerville is Eric Sears, who has a unique perspective within the company. As a former long-time customer of the dealership, he can apply that point of view to appreciate what the company is accomplishing with the renovation project.

Sears has only been on the job for six months after spending a combined 25 years with two South Carolina contracting companies and at Republic Services, the waste management firm. In those previous roles, he often called upon Blanchard to solve equipment needs for his employers.

Since coming aboard at Blanchard Machinery, he has also learned from many of the Summerville customers that they are excited to see how the renovations will make the operation even better when it opens late this year.

"Oh yeah, I have talked to a few of them because I'm curious to know what they want and need from us," Sears said. "I have also explained what we are doing, and we have some drawings on display here to show them what the renovated branch will look like. From what I am hearing, they are ready to see a fresh, new building. It has served us well for a long time, but what we are upgrading to will be a modern facility that will display our equipment better. They're also excited about the larger yard and being able to move their equipment around more easily, as well as our being able to have more parts in stock."

He said that a lot of logistical work was needed by the team to prepare for the start of the renovations. Luckily, the staff demonstrated, he said, an "unbelievable buy in" to what was involved to make it a success.

For instance, Summerville's employees moved its entire parts inventory, numbering hundreds of thousands of parts, from the old building to a temporary facility prior to construction.

"And that was just one of many tasks that we had to accomplish," Sears said. "Because they worked so hard, our people deserve a lot of credit for getting us ready for the renovations."

To alleviate any concerns by Summerville's customers that the upgrade process would have a negative effect on getting their machines serviced, Boyd Blanchard said the dealership invested in a big-top tent on the property that housed four extra bays in which to work on equipment.

"As a company, we are very proud of how our people came together to effectively work through the logistics to make sure our customers did not feel any disruption in service during the renovation."

Blanchard Machinery is a fourth-generation company with roots dating to 1952, when it began as Joseph L. Rozier Machinery Company, a Cat dealer in central Florida. Its founder was Joe Rozier, the great-grandfather of Rozier and Boyd Blanchard. After his passing in the 1970s, his son-in-law, G. Robert Blanchard, saw an opportunity to expand Cat more widely in the South Carolina market by purchasing the former Jeff Hunt Machinery Company in 1982. At that point, he established Blanchard Machinery Company before turning over its leadership to his son, current President and CEO Joe Blanchard, Rozier and Boyd's father, in 1996.

"It is incredibly exciting to be able to build upon the legacy that our great grandfather started, but we're stewards of Blanchard and it is up to us to continue to make it a better company for our future generations," Rozier said. "It is also exciting in the construction industry to have a partner like Caterpillar and experience the longevity that Cat dealers have if they run their companies the right way."

Today, the South Carolina dealership has 630 employees across its 12 state-wide locations.