A suspect is taken into custody after a giant blaze destroyed an integral part of I-85 that connected suburban commuters to the city of Atlanta. 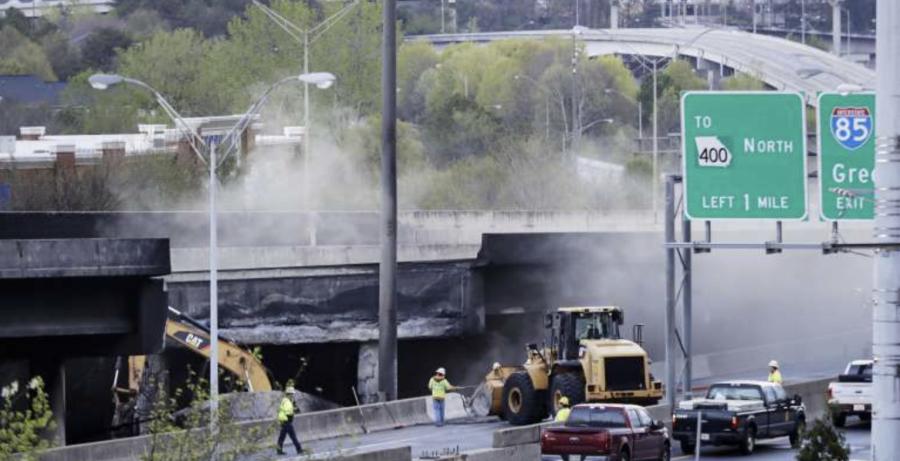 Crews worked to clean up the remaining rubble and debris leftover from a massive fire destroyed the bridge connecting commuters to the northern suburbs of Atlanta.

As crews rushed to clear debris from a major Atlanta interstate span that collapsed in a raging fire, commuters in the Southeast's largest city braced for the first full workweek without the key link to some of the city's biggest suburbs.

Officials pledged after Thursday's collapse of a 350-foot section of Interstate 85 that a replace bridge would be built as soon as possible. But crews were working around the clock again Sunday to finish removing scorched debris from the collapsed northbound span and removing the southbound span weakened by the blaze.

After that, a replacement bridge could take months to build.

The fire was started by a man smoking crack under the bridge in an area north of downtown Atlanta where the state of Georgia stores noncombustible, construction materials, authorities said. It rapidly grew with smoke billowing high above the city's skyline. It didn't take long before chunks of concrete weakened by the high heat began flying off the bridge, leaving firefighters to scramble away for safety. No one was injured.

The closed section of I-85 is a key link to Atlanta's northern and northeast suburbs. It carries about 400,000 vehicles a day in a city where there are surprisingly few alternative routes for its size.

Friday's commute saw major delays as commuters swamped Atlanta's mass-transit system and other highways. But that was with some schools and a number of nearby offices closed in the immediate aftermath of the fire.

Monday's first normal day since the collapse could provide an even tougher test.—AP