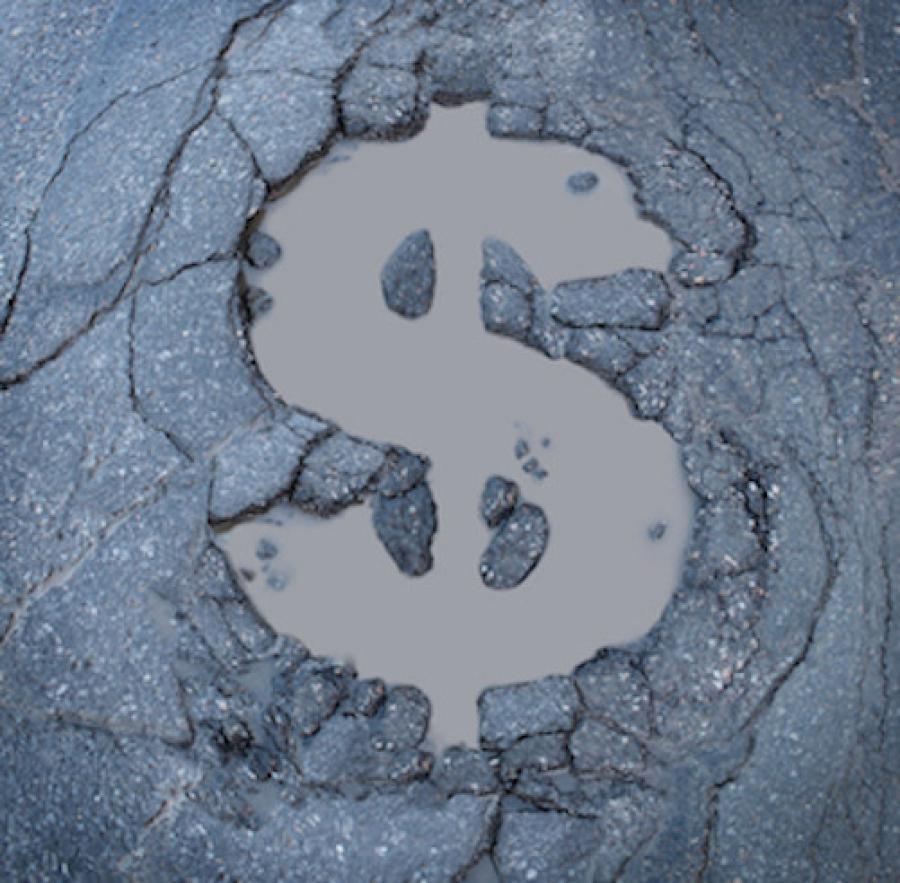 Driving on deteriorated roads costs California motorists a total of $22.1 billion each year in extra vehicle operating costs, according to the Trip report.

A recent report from Washington, D.C.-based national transportation research organization, TRIP, has found that deteriorated, congested, or unsafe roads and bridges in California cost state motorists $61 billion a year, nearly $3,000 per driver in some urban areas.

“The TRIP report, California Transportation by the Numbers: Meeting the State's Need for Safe, Smooth and Efficient Mobility, finds that throughout California, more than two-thirds of major locally and state-maintained roads are in poor or mediocre condition and 1,603 of 25,657 locally and state-maintained bridges that are 20 feet or longer are structurally deficient,” said Rocky Moretti, director of policy and research for TRIP. “The report also finds that California's major urban roads are becoming increasingly congested, causing significant delays and choking commuting and commerce.”

Moretti noted, however, that recent legislation directing $5 billion annually to transportation issues will likely help alleviate the transportation problems, but it may take a few years before the boost in funding has an impact. Until then, drivers will pay the price in a myriad of ways.

Driving on deteriorated roads costs California motorists a total of $22.1 billion each year in extra vehicle operating costs an average of $843 per driver,” according to the report. The costs include accelerated vehicle depreciation, additional repair costs, and increased fuel consumption and tire wear.”

“You look at some of these urban areas with pavement in poor condition, the number of major urban areas where congestion is robbing them of up to two weeks of working hours, you get a sense of how significant these challenges are,” Moretti said.

The report also found that traffic congestion in California is worsening, costing the state's drivers a total of $29.1 billion each year in lost time and wasted fuel. Eighty-five percent of the state's urban Interstates are congested, costing commuters both time and money and imposing increased costs on businesses, shippers and manufacturers, which are often passed along to the consumer.

“As the country moves beyond the recession, you see a lot of growth again,” Moretti said. “California is facing challenges of infrastructure at a time of renewed economic and travel demand. We have urban areas that have a transportation system with really a lack of reliability. It impacts economic performance in those areas. If you look at the Bay area, Southern California transportation challenges, not only vehicles, but public transportation, bicycles, if the state is not able to make improvements, it causes challenges to the economy.”

Fifty-six percent of the Golden State's bridges are at least 50 years old — the eighth highest rate in the nation, according to the report. “Statewide, 1,603 of 25,657 bridges (20 ft. or longer) are structurally deficient, with significant deterioration to the bridge deck, supports or other major components. Bridges that are structurally deficient may be posted for lower weight limits or closed if their condition warrants such action.

Over the past five years, traffic crashes in California have claimed the lives of 15,730 people, bringing California's overall traffic fatality rate to 1.07 fatalities per 100 million vehicle miles of travel. That's lower than the national average of 1.18. The fatality rate on California's non-interstate rural roads is approximately four and a half times higher than on all other roads in the state at 3.48 fatalities per 100 million vehicle miles of travel vs. 0.76. Traffic crashes in which roadway features were likely a contributing factor imposed $9.8 billion in economic costs on California drivers in 2016.

Investment in California's roads, highways and bridges is funded by local, state and federal governments. In April 2017, the California legislature enacted SB 1 — the Road Repair and Accountability Act. SB 1 increased state revenues for transportation by increasing the state's gasoline and diesel taxes, implementing a transportation investment fee on vehicles and initiating an annual fee on zero emission vehicles. It is estimated that SB 1 will increase state revenues for California's transportation system by an average of $5.2 billion annually over the next decade.