The weather system that was once Hurricane Ida roared through the mid-Atlantic and Northeast states Sept. 1-3, bringing with it historic rainfall amounts, catastrophic flooding, multiple reports of tornadoes, and death and injuries.

The cleanup from the storm continued through the next week as at least 53 people in five states died as storm water cascaded into people's homes and engulfed automobiles, as of press time, the Associated Press reported. The massive amounts of rain overwhelmed many urban drainage systems in cities like New York and Philadelphia that were never meant to handle so much precipitation in such a short time. 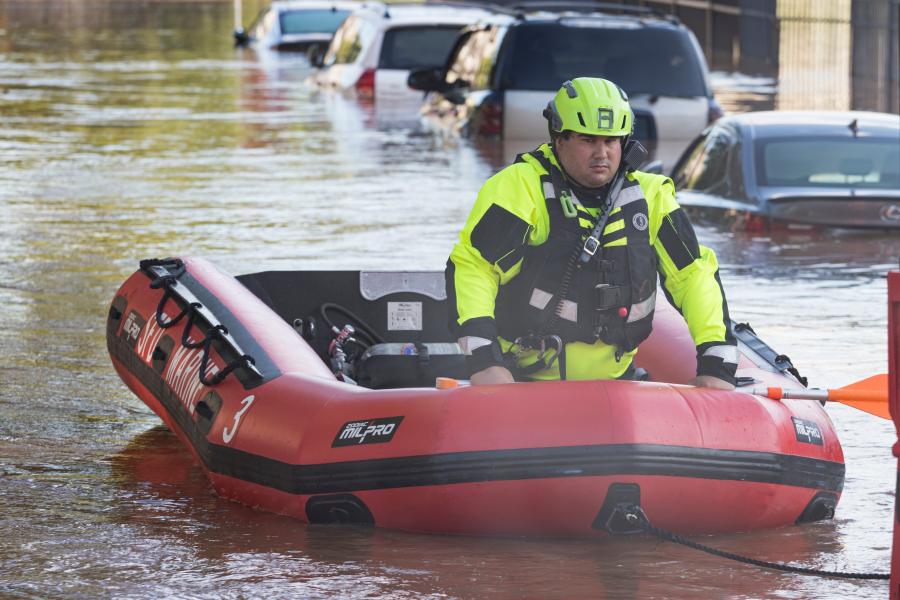 New Jersey suffered the highest death toll, where at least 27 people perished from punishing rains and wind that began late Sept. 1. Most of the state's victims drowned after their vehicles were caught in flash floods, some dying in their submerged cars, some getting swept away after exiting into fast-moving water.

Floodwaters and a falling tree also took lives in Maryland, Pennsylvania, Connecticut and New York. In New York City, 11 people died when they were unable to escape rising water in basement apartments, according to the AP.

Authorities said the work of searching for possible victims and identifying the dead was not over.

By then, the storm dumped more than 9 in. of rain in parts of New Jersey, Pennsylvania, Massachusetts and Rhode Island, and nearly as much on New York City's Staten Island. In addition, the National Weather Service (NWS) reported at least 10 tornadoes were spawned across the region.

After Hurricane Ida slammed into the Gulf Coast near Port Fourchon, La., on Aug. 29, it cut a destructive path northeast through Mississippi and other southern states over the next two days. Widespread flood damage occurred in many places, along with high winds and twisters.

By Aug. 31, the weakened but still rain-laden storm system began to drench the mountainous state of West Virginia. 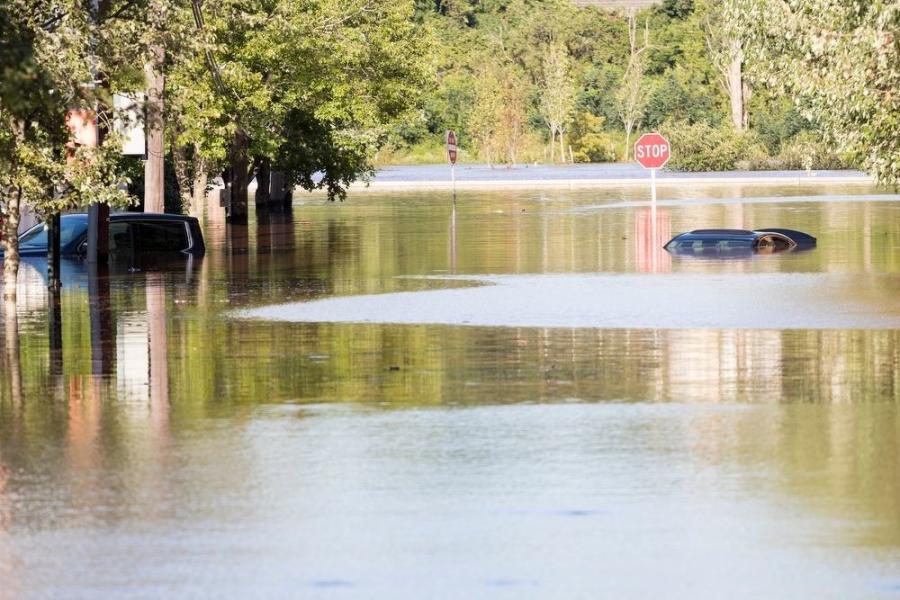 Rainfall that descended across West Virginia as Tropical Depression Ida caused scores of small streams to leave their banks, triggered dozens of slides that temporarily blocked roads and uprooted enough trees to leave 11,000 homes and businesses without power.

Luckily, most of West Virginia received less than 2 in. of rain, although a narrow corridor of storm activity stretching northeastward from Logan to Preston County bore the brunt of Ida's output, with 3 to 4 in. of rain measured in area gauges.

Early on the day of Sept. 1 in Clay County, where Ida dumped a storm total of 4.06 in. of rain, West Virginia Division of Highways crews were seen clearing rocks, mud, and uprooted trees from a series of slides along WV State Road 4 between Clay and Ivydale, the Charleston Gazette-Mail reported.

The capital city news source noted that there were no reports of deaths, evacuations, water rescues or major damage to homes or businesses when Ida exited all but the extreme eastern panhandle of the state late that evening.

In Virginia, Ida's heaviest rain fell across the northern sections as forecasters expected, with flash flooding reports concentrated around Charlottesville and Fairfax County. In the western part of the state, the Buchanan County Sheriff's Office confirmed the death of one person Sept. 1 because of flooding in the Guesses Fork area of Hurley.

The Virginia Department of Transportation (VDOT) also said that high water was left behind on numerous secondary routes in the Shenandoah Valley and rural northern Virginia late on Sept. 1.

An early morning storm on that day left a trail of tree damage and flash flooding reports between Charlottesville and Washington.

The severity of the tropical storm's power became more intense as it reached the Washington, D.C., area with many reports of blinding waves of heavy rain, high wind, frequent lightning, flash flooding, tornadoes and a dramatic water rescue in Maryland.

Around 3 a.m., more than 300 lightning bolts were detected in a 15-minute time span around Washington and its suburbs in Virginia and Maryland. 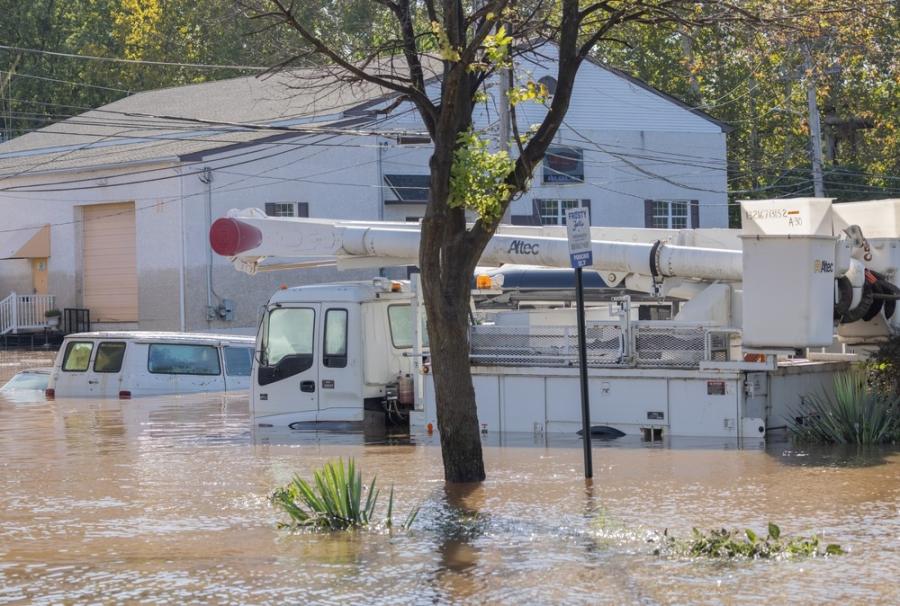 Torrential downpours led to high water on some of the Capital region's most important roadways. Lane closures were put in place on Interstate 66 and the Capital Beltway's Inner Loop in Virginia. In the District, a flash flood forced officials to detour traffic off Rock Creek Parkway near the Kennedy Center.

In northwest D.C., a surge of water scattered debris and broke up surfaces on Broad Branch Road, an area historically vulnerable to flash flooding. A WTOP Radio correspondent reported that floodwaters had rendered the road "nearly impassable," with large trees, boulders and slabs of asphalt blocking both lanes on the way down into Rock Creek Park.

Later in the day, a driver and 10 students were quickly rescued from a school bus that was stuck on a bridge in Thurmont, Md., due to high water, according to the Frederick County Sheriff's Office. All the students and the driver were reunited with their families before the end of the day.

It was one of 17 water rescues in the county, just south of the Pennsylvania border, WUSA-TV reported. There were also more than 80 road closures in place on Sept. 1, county EMS officials told the station.

If flooding were not enough, two tornadoes also struck Maryland, one in Annapolis around 2:15 p.m., and another reported 3 mi. west of Wicomico in Charles County.

"Our first responders are out there working hard to get those roads cleared and make sure everybody's OK," Thomas said.

However, there were reports of structural damage to some buildings in the area.

By the morning of Sept. 2, Ida had dumped more than 7 in. of rain over parts of northern Maryland — and some rivers had yet to crest.

Ida tracked over the Appalachians into southwestern Pennsylvania Sept. 1, dumping buckets of rain onto already-saturated roads, flooding neighborhoods, and worrying officials over rising river levels in the coming days.

In Johnstown, a community infamous for its flooding issues, Ida's remnants forced about 3,000 people out of their homes after hours of rainfall pushed the water level at the Wilmore Dam to dangerous heights. The nearby Hinckston Run Dam also was being monitored, according to Cambria County Emergency Services.

Both barriers, built at the turn of the 20th century, were rated poor in a September 2020 inspection and have been considered high-hazard dams that are likely to kill someone were they to fail, reported the Pittsburgh Post-Gazette.

A total of 376 roads across Pennsylvania were closed at midday Sept. 2, said Melissa Batula, PennDOT's acting deputy executive secretary, at a news briefing. Most of those are secondary roads, but she said 16 major roads across the state were blocked off, including Interstates 76 and 676 in Philadelphia after 6 to 8 in. of precipitation. 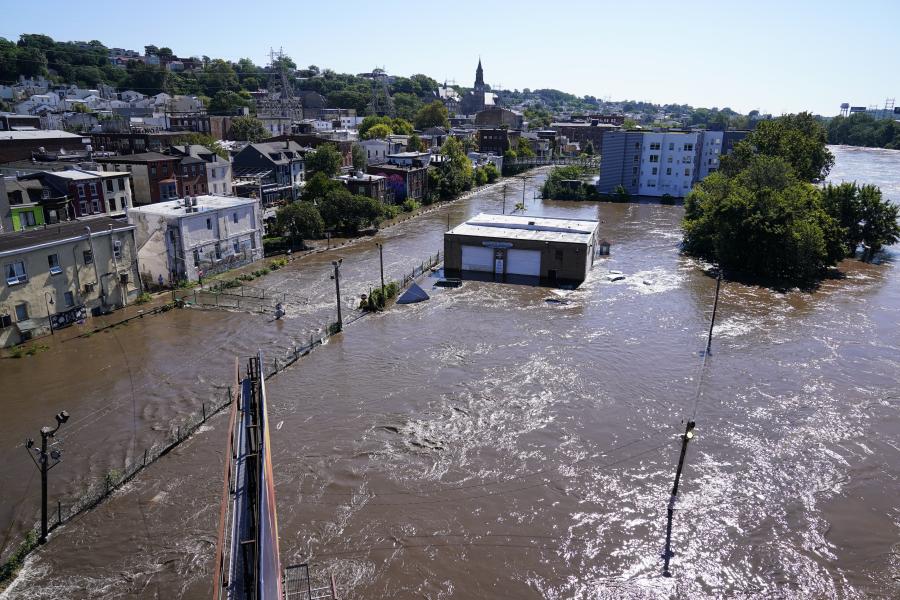 Major flooding from the Schuylkill River left those thoroughfares, along with MLK Drive and Kelly Drive, closed in the city as water took over the roadways. Interstate 276 (Vine Street Expressway) itself became a river that cut Philly's Center City in half from 22nd Street to Broad Street. Boathouse Row was also inundated with water.

Among the roads shut down in central Pennsylvania was a portion of PA Route 222 in Lancaster County. More than 7 in. of rain fell in Lancaster and Hershey.

PennDOT dispatched workers to inspect bridges and roads statewide to assess the damage from flooding, the transportation agency said.

An EF-2 tornado barreled through Montgomery County, north of Philadelphia, from Fort Washington in Upper Dublin Township to Horsham Township, with "estimated wind peaks [of] up to 130 mph," the NWS's Mount Holly, NJ office tweeted Sept. 2.

After the storm passed, motorists were met with scenes in Upper Dublin that some described as looking like a war zone complete with roadblocks, downed wires and trees, and structural damage to buildings, including roofs torn off.

"It's incredible how the damage is different here in the eastern side of the county, [where] it's more wind from the tornado, but [in] Bridgeport and Norristown and in Perkiomen Valley, we had a lot of flooding," Montgomery County Commissioners Vice Chairman Ken Lawrence Jr. told Montgomery Media. "People have been displaced there. So, it's going to take some time, but we need neighbors to help their neighbors."

"The devastation has been countywide in this storm," said Val Arkoosh, chairperson of the Montgomery County Commissioners.

Of Pennsylvania's five deaths statewide due to Ida, three were killed in Montgomery County.

Flooding in New Jersey caused the most loss of life due to the storm's rampage, the AP reported early on Sept. 3.

Typical of the tropical storm's fury in the state, was one death reported in Passaic, as Mayor Hector Lora said a 70-year-old man was swept away by flash flooding.

"His family was rescued; they were all in the same car," Lora told New York's WCBS-TV. "Unfortunately, the car was overtaken by the waters, and the firefighters who were being dragged down under the vehicle were unable to get him out." 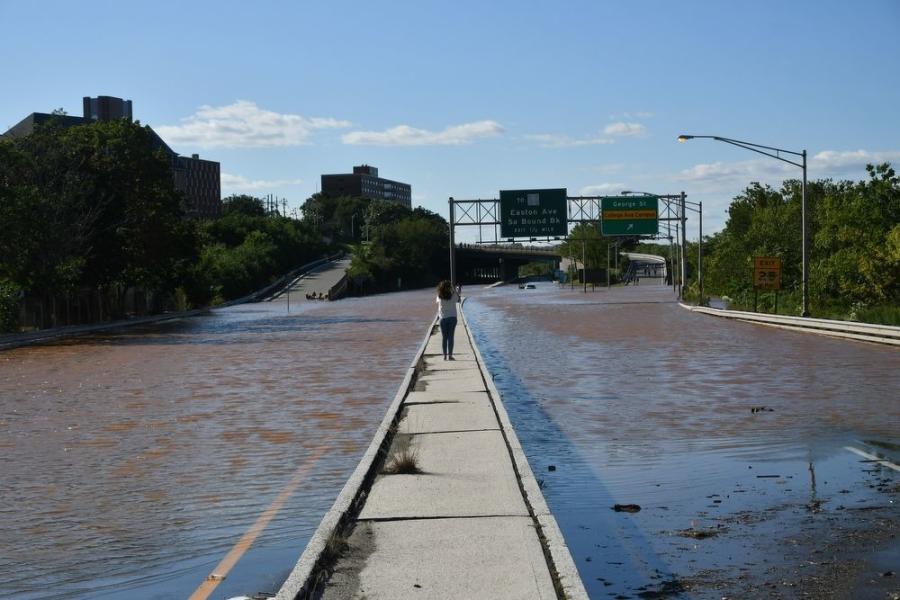 Ida's destruction caused Gov. Phil Murphy to declare a state of emergency in all 21 New Jersey counties, urging people to stay off the state's flooded roads.

Newark International Airport shut down the night of Sept. 1 as videos showed water rushing through a terminal. The airport began to allow limited flights the next day, but officials said 370 flights had already been canceled.

Amtrak service was also canceled between Philadelphia and Boston.

In New York, the Ida's deluge zeroed in on the nation's largest city and brought transportation in large parts of the metropolis to a halt. FDR Drive in Manhattan, and the Bronx River Parkway were under water. Garbage bobbed in the water rushing down streets.

Most of the 18 people who died in New York City, including a family of three in Woodside, Queens, lived in flooded basement apartments, according to the New York Times.

"We're enduring an historic weather event tonight with record breaking rain across the city, brutal flooding and dangerous conditions on our roads," New York City Mayor Bill de Blasio said while declaring a state of emergency across the five boroughs late on Sept. 1.

Subway stations and tracks became so flooded that the Metropolitan Transportation Authority (MTA) suspended all service, the AP reported. Videos posted online showed subway riders standing on seats in cars filled with water. The MTA reported that at least 17 trains were stranded between stations overnight, but all riders were evacuated safely.

Some subway and rail service began ramping up service again on Sept. 2.

The NWS office in New York issued its first-ever set of flash flood emergencies in the region Sept. 1, alerts only sent in the most dangerous conditions.

Rescues took place all over New York City as its 8.8 million people saw much worse flooding than from Tropical Storm Henri just a week and a half earlier.

The NWS recorded 3.15 in. of rain in Central Park in one hour on the night of Sept. 1, far surpassing the 1.94 in. that fell in a single hour during Henri on the evening of Aug. 21, which was believed at the time to be the most ever recorded in the park.

Before dissipating over the Canadian Maritime provinces on Sept. 3, the storm system dumped up to 9 in. of rain fell over parts of Connecticut, resulting in widespread flooding, the AP noted. A state trooper died in Woodbury after he and his police cruiser were swept away by floodwaters from the Pomperaug River. Authorities used boats to rescue 18 people from a flooded neighborhood in Plainville.

Similar rainfall totals were recorded in neighboring Rhode Island. Rivers in the state rose toward moderate flood stage, leading to a water rescue of 15 people — including one who uses a wheelchair — from a flooded complex in North Kingstown.

In southeastern Massachusetts, New Bedford received 9.5 in. of precipitation and a small tornado touched down on Cape Cod. 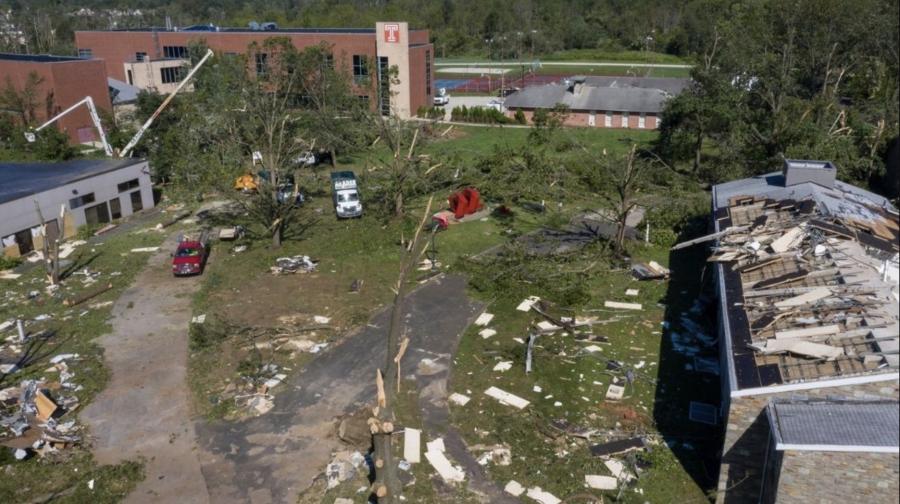