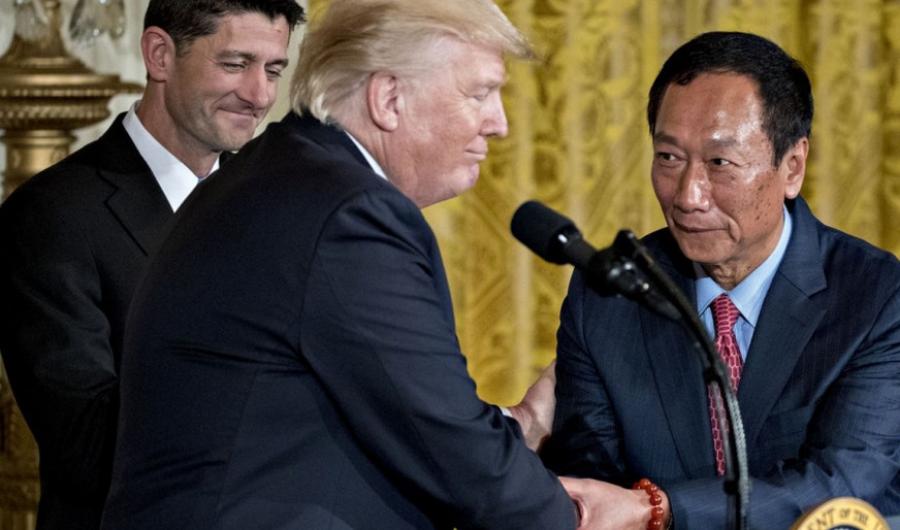 MILWAUKEE (AP) — President Trump recently took a trip to North Dakota and Wisconsin to attend a series of rallies and fundraising events.

On June 28, Trump praised the groundbreaking for a $10 billion Foxconn plant in Wisconsin.

Trump said that what used to be a field approximately 30 mi. south of Milwaukee in Mount Pleasant will become one of the largest developments ever built in the world at 20 million sq. ft.

He said the decision by the Taiwan-based maker of LCD screens and assembler of Apple iPhones shows “America is open for business.”

Thousands of construction workers are expected to build the plant, which will eventually employ about 13,000 people.

Trump and other officials including Gov. Scott Walker and House Speaker Paul Ryan wielded gold-toned shovels at a ceremonial groundbreaking for the plant on June 28. They stood in front of a massive American flag held aloft by a pair of construction cranes.

Trump, Ryan and Walker were joined by Foxconn CEO Terry Gou and the first Wisconsin Foxconn employee Christopher Murdock for the ceremony.

Trump also attended a pair of fundraising events in Milwaukee benefiting a joint effort between the Republican Party and his re-election campaign.