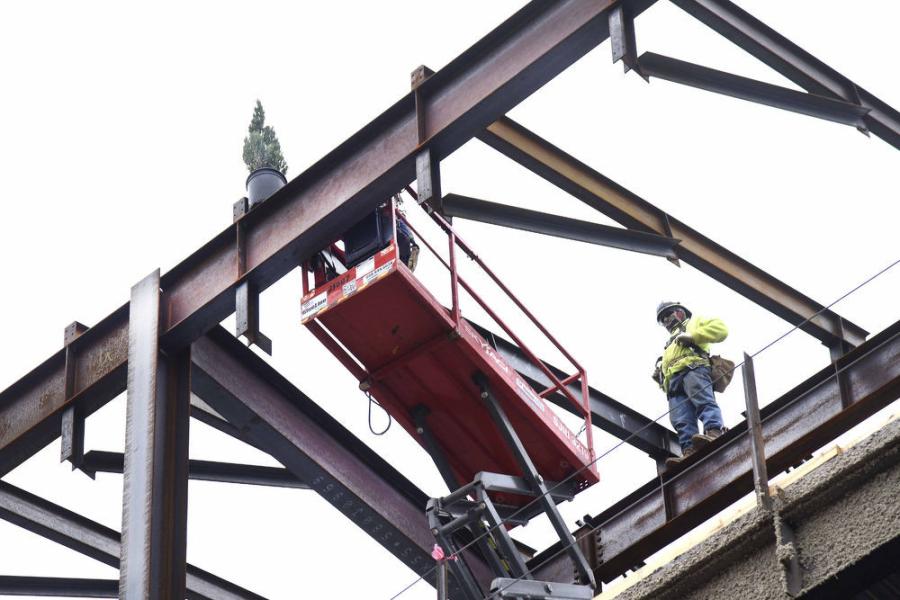 The highest beam is placed on the TTI headquarters building.

Hundreds of construction workers, System dignitaries, TTI leadership and members of the media attended the event. “Topping out” is a centuries-old tradition in the construction business. The ceremony occurs when the beam of the building's highest point is put in place. 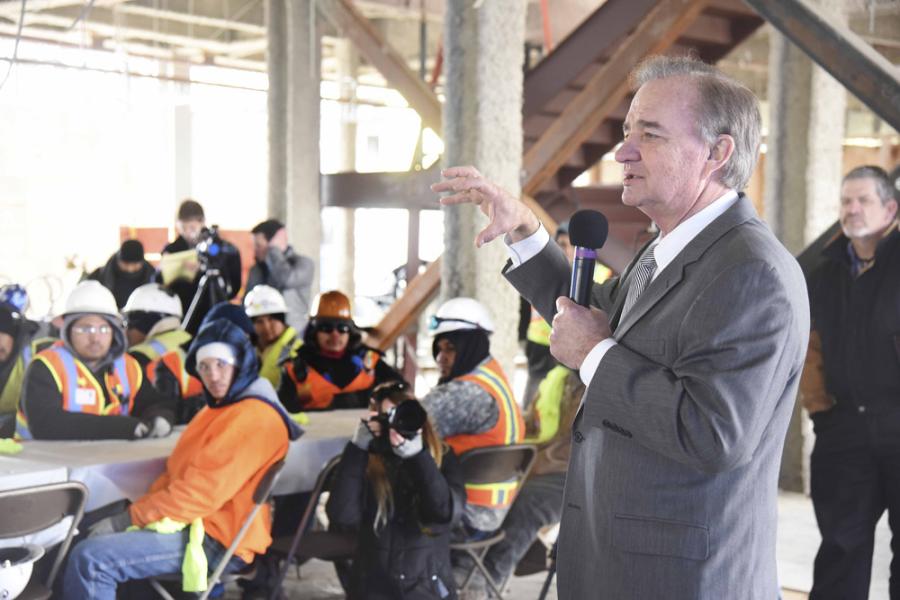 “This building is going to help save thousands and thousands of lives,” Chancellor John Sharp said as he addressed the crowd, thanking the workers in both English and Spanish.

Sharp, who often publicly applauds the life-saving and other wide-ranging transportation research conducted by the Institute, was the impetus behind the System's RELLIS Campus concept, transforming the 2000-acre undeveloped campus into a modern, educational and engineering complex.

The RELLIS Campus development is in its early stages. The Center for Infrastructure Renewal (CIR) building is nearly complete, and the TTI Headquarters Building is scheduled to be completed by the end of the year, with occupancy planned for spring 2019. CIR, a shared facility of TTI and the Texas A&M Engineering Experiment Station, will house researchers dedicated to “developing advanced and sustainable materials and structural systems that will reduce cost and extend infrastructure life, safety, resiliency and durability.”

“We are pleased to be the first of the Texas A&M System to be headquartered here on the RELLIS Campus,” said Greg Winfree, TTI agency director. “This is a monumental time for us. It's a testament to the leadership and vision of Chancellor John Sharp, who had the vision to commit this 2,000 acres into a world-class education and research campus.”

The $70 million, 179,000-sq.-ft. TTI headquarters will house all of the agency's local employees and TTI's Driving Simulation and Visibility Research laboratories.

“When you combine the best agency in the world in transportation research [TTI] with that building over there, the Center for Infrastructure Renewal, you'll have everything you need to design buildings and infrastructure to make sure they are safe,” Sharp said. “This building is going to save thousands and thousands of lives. This is going to be the most remarkable transportation research complex that exists anywhere on planet Earth.”

Sharp announced the RELLIS Campus concept in May of 2016, to address critical engineering problems while enhancing education and training opportunities. RELLIS researchers are actively seeking partnerships with private sector industries involved in connected and automated technologies, infrastructure, and energy, just to name a few.

Educationally, Blinn College has partnered with the A&M System and is building its second local campus on site. And, in the fall of 2018, students from the System universities will be able to pursue various associate and bachelor's degree programs through the RELLIS Academic Alliance.

“The [TTI] building has reached the top of its height. There have been no deaths or incidents occurring during this construction, and it's a gesture of good luck and prosperity to all those who will occupy this building in the future,” Marty Garza of Bartlett Cocke General Contractor's told the crowd.