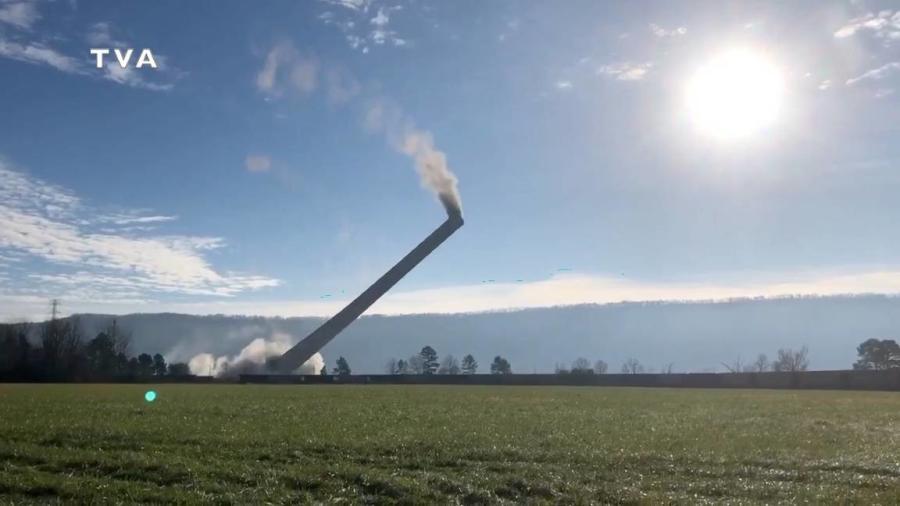 With a boom and a cloud of dust, demolition contractors on July 31 imploded the 600-ft. smokestack and the 10 boilers that had been the Tennessee Valley Authority's (TVA) oldest coal-fired facility, located in New Johnsonville, Tenn.

The demolition of the former Johnsonville Fossil Plant clears the 720-acre site for future development and a generation project that could advance TVA's clean-energy technologies, according to the federal utility corporation.

The old facility is located on the Tennessee River approximatley 80 mi. west of Nashville.

"I'm sad to see it go," said Bob Joiner, a TVA retiree who worked at the plant for more than three decades and watched the implosion. "That plant was built in the '40s by the greatest generation. They put all that together with nothing but pencils, paper and slide rules, and it was built to last."

TVA said that construction began on the Johnsonville plant in May 1949 with the first of the plant's 10 operating units going into service in October 1951. Units 1 through 4 ceased generating power as part of a consent decree with the Environmental Protection Agency (EPA). Production ended on New Year's Eve 2017.

"The team set out to honor the Johnsonville legacy by applying the same pride and integrity in the dismantling of the facility that was exemplified in the building, maintaining, and operation of it for almost 70 years," said Roger Waldrep, TVA's vice president of major projects. "Safety is our primary mission, and I'd like to thank the team who were able to complete this portion of the project without any issues."

The original town of Johnsonville was flooded in 1944 when TVA constructed the Kentucky Dam on the Tennessee River. Most residents then moved to the current site of New Johnsonville, 3 mi. upstream from the old community. It was later incorporated as a town in 1949.

Although TVA shut down coal generation at the facility at the end of 2017, TVA's Johnsonville site currently has 20 combustion turbines.

The Chattanooga Times Free Press noted that Scott Fiedler, a TVA spokesperson, said a number of those old turbines will be retired as new, more efficient natural gas generation is added to the TVA system. The utility company conditionally approved placing advanced lightweight combustion turbines — known as aeroderivatives — at the Johnsonville facility, pending environmental reviews expected to start next year, the newspaper reported.

"It's an exciting time to be in the utility industry, and technology is rapidly changing," explained Jeff Lyash, TVA president and CEO. "TVA is a technology leader, and our coal sites can serve as a testbed as we build cleaner energy systems that drive jobs and investment into our communities."

As TVA shifts away from coal to limit air pollution and carbon emissions, the federal utility has shut down most of the 59 coal-fired units it once operated over the last nine years, including the Widows Creek and Colbert plants in Alabama; the Allen (in Memphis) and John Sevier (east Tennessee) facilities; and Shawnee and Paradise stations in Kentucky.

In addition, TVA plans to close the Bull Run Fossil Plant in Oak Ridge, Tenn., by 2023 as it continues to work toward phasing out all its coal-fired operations by 2035.

Only 16 years ago, coal burning accounted for 57 percent of TVA's electricity production. By 2020, that number had dropped to only 14 percent.

Lyash said TVA is reducing carbon emissions because it plays a significant role in the region's economic development as more job creators, manufacturers and local-power companies are demanding cleaner energy.

By closing all its coal-fired plants over the next 14 years, TVA also plans to add about 10,000 megawatts of solar power.

"TVA never stands still," Lyash said. "Building a clean, low-cost energy future is an essential path for our region to compete for jobs in the new clean economy."