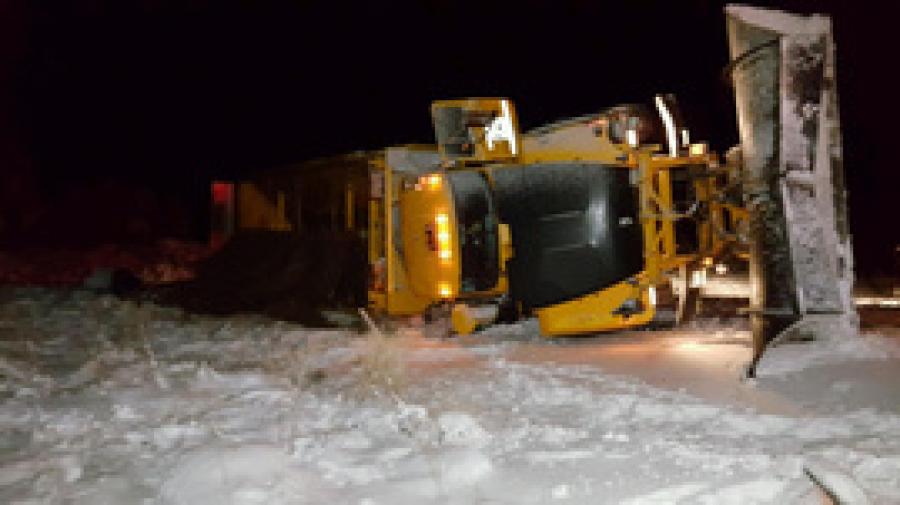 One of the plows wasn't so lucky, however, when a semi rear-ended and severely damaged it Jan. 21 on Interstate 40 near Seligman. In addition to sending the two ADOT employees aboard to the hospital with minor injuries, the crash hindered ADOT's efforts to clear snow and ice along that route.

In the other crash, an SUV suffered serious damage Jan. 19 when it hit a snowplow clearing State Route 89A between Prescott Valley and Jerome. The plow and its operator were able to continue working, but only after losing precious time dealing with the crash.

“During storms, drivers need to slow down and give plows plenty of space,” said Alvin Stump, district engineer in ADOT's Northwest District, where both of the incidents occurred. “Plows require a large work area to remove snow.”

It isn't easy driving a snowplow on slippery roads with limited visibility, and other drivers make that job dangerous when they don't give ADOT's operators plenty of room to work. So respect the plow. It starts with staying at least four car lengths behind and never passing a working plow until the operator pulls over to let traffic by.

Gabriel Alvarado, who has plowed Interstate 40 for 13 years out of ADOT's Seligman operation, said he likes seeing a line of vehicles making the sensible decision to follow his snowplow.

“It's the best possible scenario to have a plow right in front of you,” he said.

But several times during a 12-hour shift a passenger vehicle or semi will make the ill-advised decision to pass Alvarado's snowplow in an unplowed lane, raising the potential for a collision.

Alvarado said it isn't uncommon for him to later come upon those who've passed him stuck in the snow after sliding off the roadway.

Other tips from ADOT's snowplow drivers:

• Never assume a snowplow operator knows you are nearby. If you can't see the plow driver, there is a good chance the driver can't see you.

• Plowed snow can create a cloud that reduces visibility, and spreaders on trucks throw de-icing agents or sand that can damage vehicles, so stay back.

• Leave space when stopping behind a snowplow. The driver might need to back up.

• If approaching an oncoming snowplow, slow down and give the plow extra room.

• Just because a plow has been through the area, drivers shouldn't assume the roadway is completely clear of snow and ice.