Two Spans On New Hampshire/Vermont Border to Be Replaced 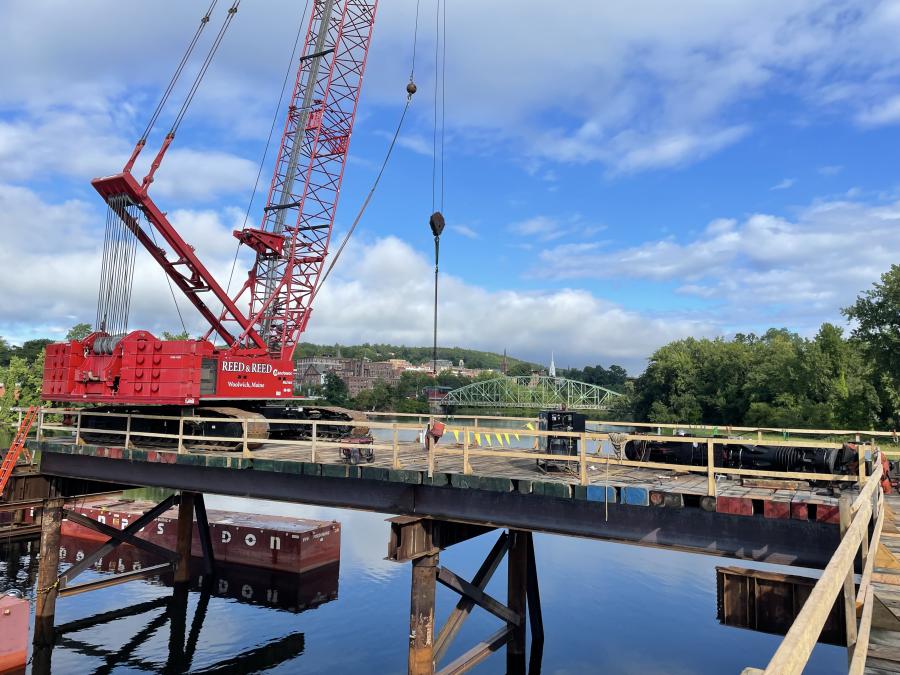 The total cost of the project will be $61.2 million with New Hampshire paying for the bulk of the amount and Vermont the remainder. (Photo courtesy of NHDOT)

The New Hampshire Department of Transportation has restarted construction activities to replace the two existing bridges carrying NH Route 119 in Hinsdale, N.H., over the Connecticut River into Brattleboro, Vt., with an eight-span steel girder bridge.

Reed & Reed of Woolwich, Maine, is the lead contractor on the project with assistance from Bazin Brothers of Westminster, Vt., and East Coast Signals of Deerfield, N.H. 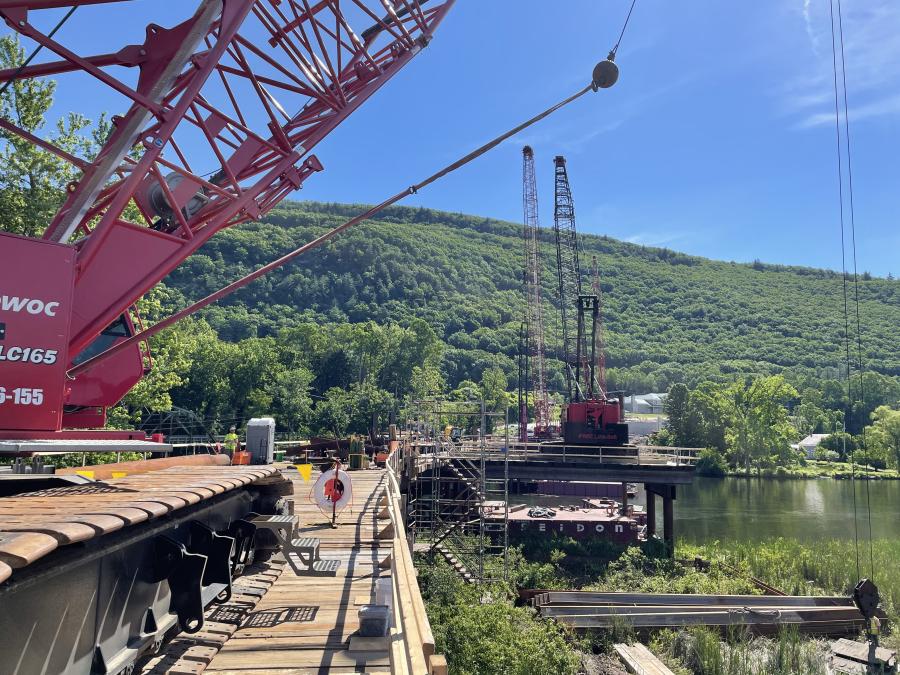 The new bridge has seven piers with work progressing on a number of them.

"We're doing abutment work on the seven piers and working on the trestle to give us access to the river piers," said Dustin Littlefield, project manager of Reed & Reed. "We're also doing approach work for the new alignment and slope embankment work."

Gary Laroche, project manager of the Vermont Agency of Transportation, said the demolition of the former Raymond James Metals building on Route 142 that will make way for the construction of the new bridge is the first element of the project that has been completed in Vermont. A crew from Bazin Brothers performed the demolition.

"The relocation of overhead electricity and communication lines was also completed and they were moved underground," he said. "In the next six months, we'll be mobilizing equipment to construct Vermont Pier 1. We also have to manage soils in accordance with state regulations, so we're stockpiling soil for disposal. Next summer, we'll close Route 142 for 90 days to build retaining walls up to 12 feet in height that approach the bridge that will be built over the New England Railroad and the Connecticut River."

Work started on the project in September 2021 with an anticipated completion date of Oct. 24, 2024.

Currently, Reed & Reed is constructing rebar and concrete formwork for the New Hampshire Abutment backwall, the pier cap for Pier 7 and the footing for Pier 6. It also is augering out the top 80 to 85 ft. of 30-in. diameter pipe pile at Pier 5, driving cofferdam sheets at Pier 4 and extending the trestle toward Pier 3, Moran said.

The two truss bridges that are being replaced — the Charles Dana and the Anna Hunt Marsh bridges — were constructed in 1920, with modifications installed in 1988 and 2003. They have been on the state's "Red List" since 2018 with poor superstructures listed. The 21- and 23-ft. bridges are too narrow and have provided a long history of traffic incidences and accidents when large vehicles have attempted to cross. 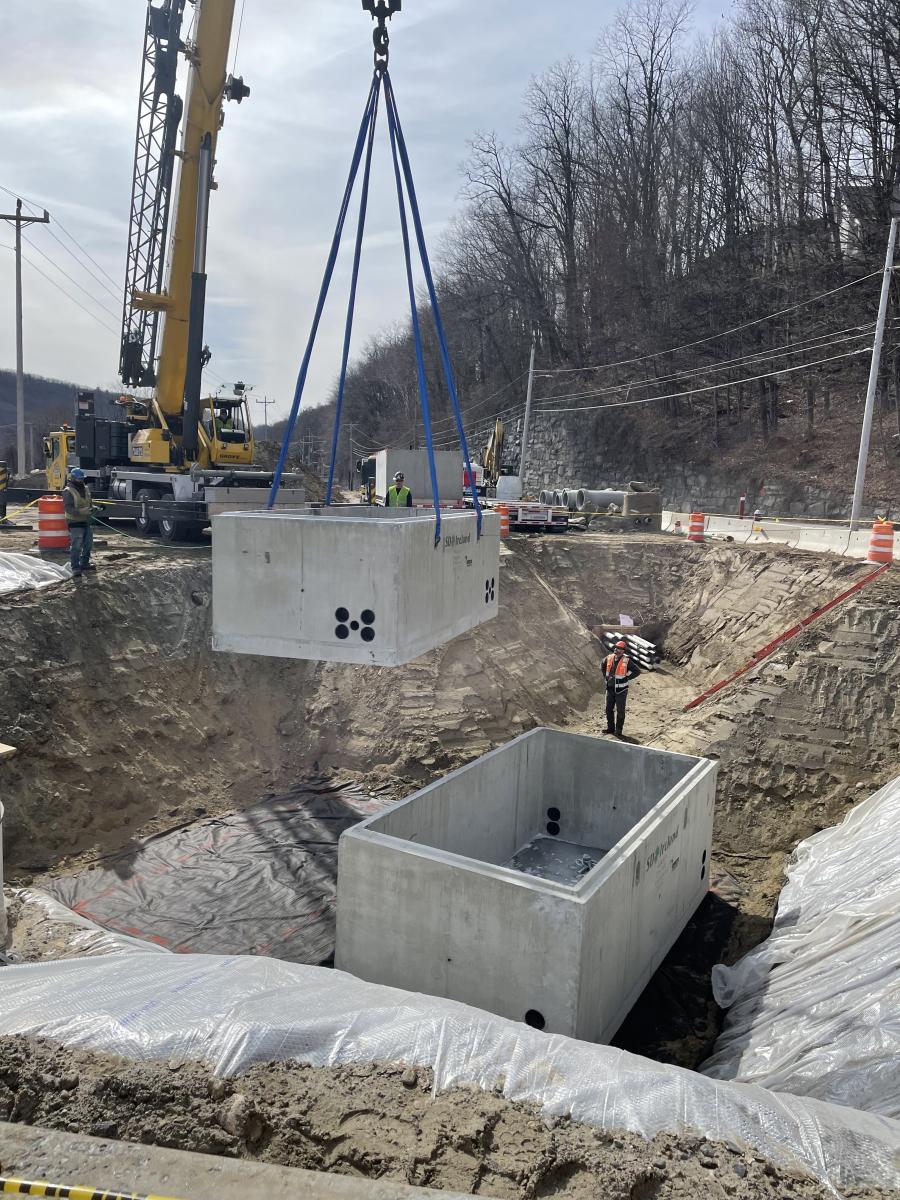 The truss bridges that are being replaced by the new steel girder bridge won't be demolished. Laroche said they will be rehabilitated for pedestrian and bicycle use.

"They will be closed to vehicle traffic," Moran said. "A future contract is to be put to bid to rehab those two bridges. Minor repairs will be made to the concrete and steel portions of these structures and a considerable amount of money will be spent on repainting them and removing and abating old lead paint prior to a new paint application."

The total cost of the project will be $61.2 million with New Hampshire paying for the bulk of the amount and Vermont the remainder.

NHDOT and VTrans have agreed to fund the project utilizing an 83/17 percent split for all preliminary engineering costs of the new bridge. The town of Brattleboro will pay for 7 percent of the construction costs to rehabilitate the Anna Marsh Truss Bridge. NHDOT will pay for 93 percent of the costs of the rehabilitation of the Anna Marsh Truss Bridge and 100 percent of the rehabilitation costs of the Charles Dana Hunt Truss Bridge. New Hampshire and Vermont are currently utilizing state funds, federal formula funds, and GARVEE bonding for the construction of this project. Grant Anticipation Revenue Vehicles — GARVEEs — are debt-financing instruments repaid with future Federal-aid funds. CEG