The Texas Department of Transportation (TxDOT) is making major interchange improvements where I-410 and SH 151 meet on the west side of San Antonio. 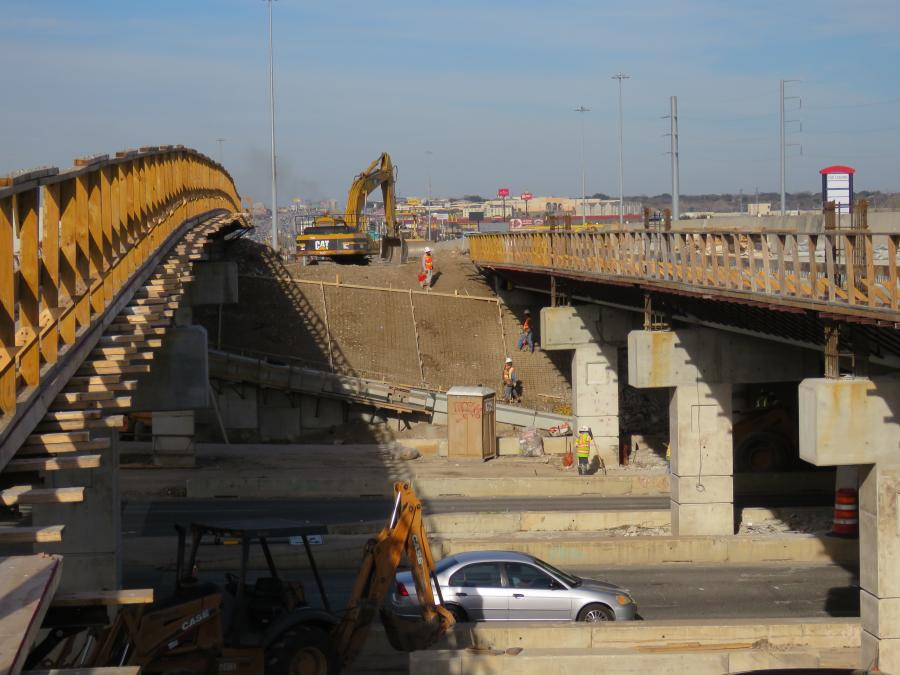 TxDOT photo TxDOT is making major interchange improvements where I-410 and SH 151 meet on the west side of San Antonio.

The Texas Department of Transportation (TxDOT) is making major interchange improvements where I-410 and SH 151 meet on the west side of San Antonio.

In addition, Loop 410 will be widened from six lanes to eight lanes (four in each direction) from Ingram Road to SH 151 and auxiliary lanes will be added to both directions of 151 from Loop 410 to Potranco Road (eastbound) and Hunt Lane (westbound). Several ramps on Loop 410 and SH 151 will be relocated to accommodate the new connectors and to improve traffic flow.

An access road flyover on southbound Loop 410 at West Military Drive will be added as well. A flyover is a high-level overpass, built above main overpass lanes, or a bridge built over what had been an at-grade intersection.

Work on the first phase of the project started on Oct. 10, 2015, and is expected to be complete in late 2017 or early 2018. The construction is considered Phase 1 for financial purposes.

A second phase of the project is under consideration, but is not yet funded. It will address traffic moving eastward on Highway 151 to southbound I-410 and northbound I-410 to westbound Highway 151. Cost for that work has not been set.

“We have a ballpark estimate of $40 million as a placeholder for now,” said Josh Donat, public information officer for TxDOT. “That only includes the two direct connectors, as the highway leading up in both directions should be fitted for this phase through other projects. We don't have funding available at this time; it's slated for a 2021 letting, but that's a date that's been selected to make sure it's included on the state-wide UTP and doesn't actually guarantee it'll be done at that point.”

Money for the work comes from Proposition 1, which Texas voters approved in 2014.

Prior to the current project, the Loop 410 and SH 151 interchange was a three-level intersection. Top level was the Highway 151 main lanes.

Middle level was the I-410 main lanes and bottom level featured traffic signals at the frontage road intersections.

No significant work on the intersection has been done in the past 10 years, Donat said. He added that population on the west side of San Antonio has been growing.

Joe Antu is the lead inspector for TxDOT, and project was designed by TxDOT's in-house design team.

Williams Brothers Construction is prime contractor. The company has performed all of its work under the open, competitive bid process, with 95 percent of that work done for its principal client, TxDOT.

Williams Brothers has completed more than 350 projects with a total value of more than $2 billion making it one of the largest highway contractors in the United States as well as the largest in Texas.

Construction on the project is progressing with crews working in various locations simultaneously.

“Frontage road work and widening of the I-410 main lanes is the critical path — mostly dirt work,” Donat said. “There's a good bit of bridge work going on over West Military.”

In preparing for the project some dirt was removed and some brought in.

“Not all the dirt removed from the project area can be used where it's needed to be added, so some is being removed and some is being bought back in,” Donat said.

“Closures are typically limited to the evenings, but we do have a few traffic adjustments needed during construction,” Donat said. “For instance, we have long-term closures of some entrance and exit ramps in place as work on widening or fitting the new direct connectors takes place. Traffic flow is OK — certainly a bit slower than before work began. That's attributable to the work zone, but also to the increase in traffic volume over the last year due to additional commercial development in the immediate vicinity.”

The improved intersection and wider roadway will provide for smoother traffic flow. It will be a time saver for those commuting to work along that I-410 corridor and will remove most of the traffic using the frontage road connector to southbound I-410 that carries traffic headed from Hwy 151 to destinations at or around Lackland Air Force Base.

The project will provide new direct connections on the heaviest turn movements in the I-410 and SH 151 interchange. This will remove that traffic from the existing intersections and access roads.

The result will be significant improvement in overall mobility and safety for the remaining turning movements and local traffic.

Commercial and retail construction along the route could benefit as well. “Plenty of room for economic growth still exists at this location, particularly west of I-410, and I'm confident we'll see that built out in the years to come,” Donat said.

Only a Minor Glitch

“We did have one discrepancy with bridge support beam dimensions in the plan sheets, but that issue was handled by an engineering review team,” Donat said. “No real costs or impacts to progress I am aware of as a result.”—CEG