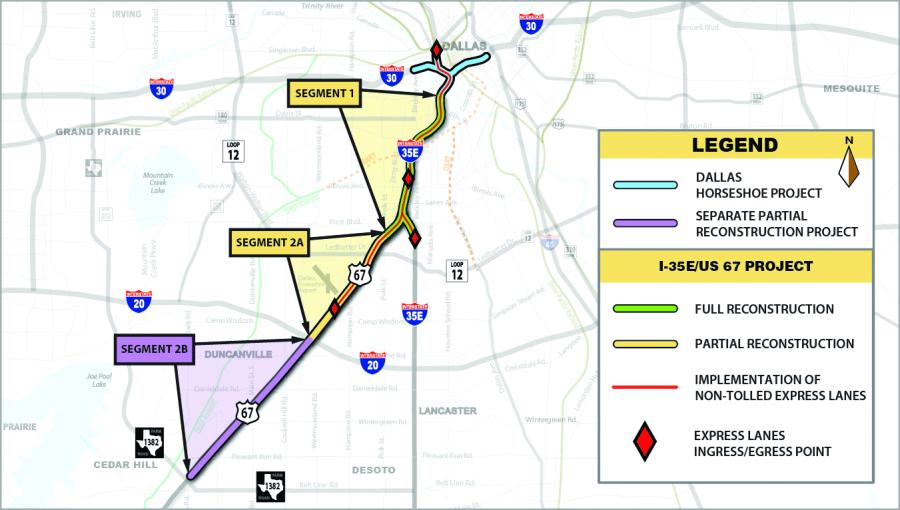 North Texans will soon begin seeing improvements to one of the state's most congested roadways, due to the decision by the Texas Transportation Commission to select Pegasus Link Constructors as the design-build contractor for The Southern Gateway project.

The $565 million Southern Gateway project will rebuild and widen Interstate 35E (I-35E) south of downtown Dallas, which is currently the 17th most congested roadway segment in Texas, according to the Texas A&M Transportation Institute. The 11-mi. project will expand I-35E from four lanes to five lanes in each direction, and also will build two reversible, non-toll express lanes in the center of the corridor. In addition, the project calls for rebuilding the I-35E/U.S. 67 interchange and widening U.S. 67 from I-35E to I-20 by adding a third lane in each direction.

A major source of funding for The Southern Gateway comes from TxDOT's Texas Clear Lanes initiative, a program that prioritizes recent voter-approved funding for congestion relief projects in Texas' metropolitan areas. The Southern Gateway includes $264 million in congestion relief funds, which will help improve traffic flow for 180,000 motorists a day in southern Dallas County. The $565 million project cost reflects the value of the base scope design-build contract with Pegasus Link.

Safety also will be enhanced with the I-35E reconstruction, as crews rebuild and smooth out the sharp Zang Boulevard curve, add shoulders and improve entrance and exit ramp movements. In addition, bicycle and pedestrian accommodations are proposed where frontage road reconstruction is proposed.

“The Southern Gateway project shows what can be accomplished when TxDOT and its local, regional and legislative partners work together,” said Victor Vandergriff, Texas Transportation Commission member. “The input we received has helped bring together a mixture of safety enhancements, mobility improvements and congestion relief in one project for southern Dallas County.”

Today's award caps a yearlong effort to identify the best proposal to design, build and potentially maintain The Southern Gateway project. Pegasus Link Constructors, a joint venture of Irving-based Fluor Enterprises, Inc. and Balfour Beatty Infrastructure, was chosen from a group of three responding firms that were shortlisted last summer.

Construction on The Southern Gateway project is expected to begin in late 2017/early 2018 with a projected completion date of 2021.

“Identifying the right project to meet the growing transportation needs of local residents has been a priority for the Dallas District,” said Kelly Selman, the district engineer of the TxDOT Dallas District. “The district works hard to address local needs and concerns, and this project brings the right mix of improvements to address those concerns.”