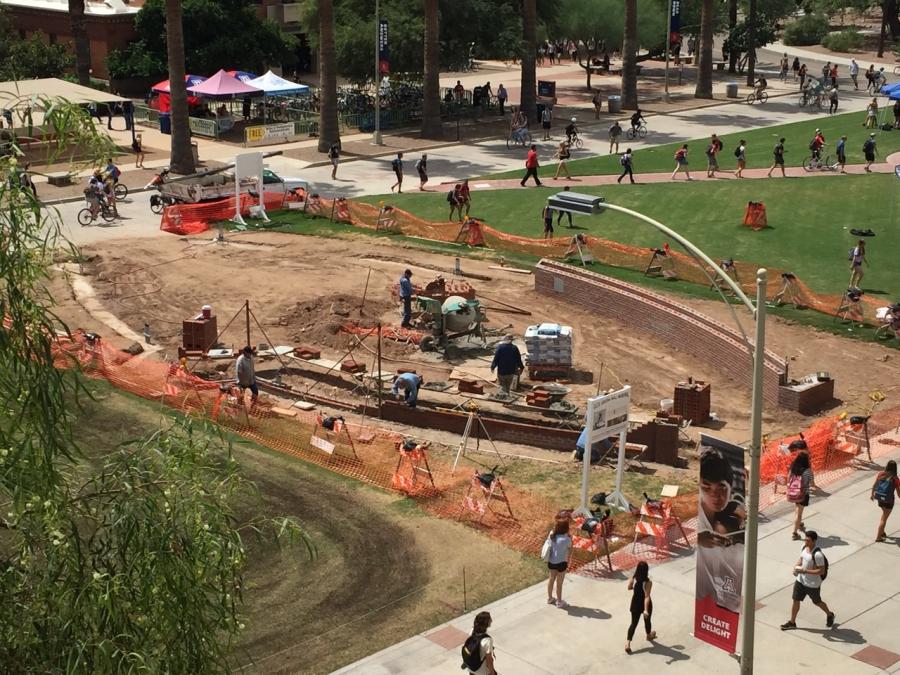 Seventy-five years ago on Dec. 7, our country witnessed one of the darkest moments in its history — the bombing of Pearl Harbor. One thousand, one hundred and seventy-seven men perished on the USS Arizona that day. Nine hundred men remain entombed on the battleship. It is a day of a national mourning, but also one that continues to inspire fresh recognition of the men who gave their lives.

“There are 1,177 medals medallions, three inches in diameter and made of bronze,” said Charles Albanese, University coordinator for the project and one of three men who helped make the project a reality. “Each has etched the name, the rank, the position the sailor or marine had on the ship, the date of birth, the date of death and the state where the sailor or marine came from. About 70 percent of the young men on that ship were an average age of 20 or under. They were kids. One of the major motivating factors for the memorial is the men that died were the same age as our students, and by installing this memorial as a reminder we are hoping and truly believe that students will realize what we are talking about when we talk about sacrifice. In one instance, over 1,100 men perished in a huge fireball. When you stand inside the memorial, no matter where you stand, you are looking at all 1,177 of the medallions.”

The project was conceived by preservation contractor David Carter, who brought his idea to Albanese, Dean Emeritus of the College of Architecture at UA. Bill Westcott, a financial advisor whose uncle remains buried in the ship, joined the two in their efforts.

The trio obtained actual drawings from the Smithsonian of the ship itself. They overlaid the precise working drawings of the ship onto the mall and discovered it fits perfectly.

“The outline itself is the full-scale actual-size outline of the USS Arizona top deck — the deck everyone would be walking on, which was teak vs. steel,” said Albanese.

“It is 602 feet long and 97 feet wide. The front of the ship is up to the left, and faces Old Main — the first building on the UA campus. The stern is pointed down below, with the curls representing anti-aircraft guns.”

“The outline embedded into the lawn itself is a 6-inch by 10-inch poured concrete curbing and is topped with a half-inch track material similar to what is poured on an Olympian quality running track. It is a very thick liquid and it has to be formed. It is non-slip, non-stick. Risk management at the University was very helpful.”

To create the outline, workers used a thin special-sized backhoe, such as the type used for running irrigation lines. They cut in 12-in. (30.5 cm) trenching and installed wooden forms and steel reinforcing bars into the concrete, which was poured in large continuous pours over the bars.

“It was done under the direct guidance of lazar surveying crews,” Albanese said. “The elevation and placement was so critical to correspond to the topography of the mall itself. It is very important for all kinds of reasons, mainly safety, that the top of the concrete be precisely level to avoid a tripping hazard.”

The mall also features a flagpole and the 350-lb. (158.75 kg) bell removed from the ship — long a part of the mall, but almost lost forever.

“The bell was almost melted down for the bronze,” said Albanese. “A University of Arizona servicemen saw the bell in a salvage yard in Maryland and he said that has to go back to U of A. He saved the bell.

“In the 1950s, when the first student union was built, the bell was put in the building, then later installed in the new student union building. The bell was positioned in the U of the whole mall. Where the flagpole is now is where the bell would have been on the ship.

“There are so many coincidences that bond this ship to the University, it is amazing. It's never ending.”

As is the reverence the University of Arizona holds for those who gave their lives. “There are 16 15-year-olds on the ship who died because they lied about their age. There are 22 sets of brothers, and a father and son. All will be clearly revealed when you start seeing the names.

“I sat down four weeks ago with one of the survivors who came to Tucson when the University played Hawaii. They wore specially designed uniforms in the colors of the ship and at half time, the band formed the ship. This particular veteran…he said, 'I can tell you stories, but I will break down in tears so forgive me for that.'” CEG