UDOT Projects Improve I-15 at Both Ends of the State 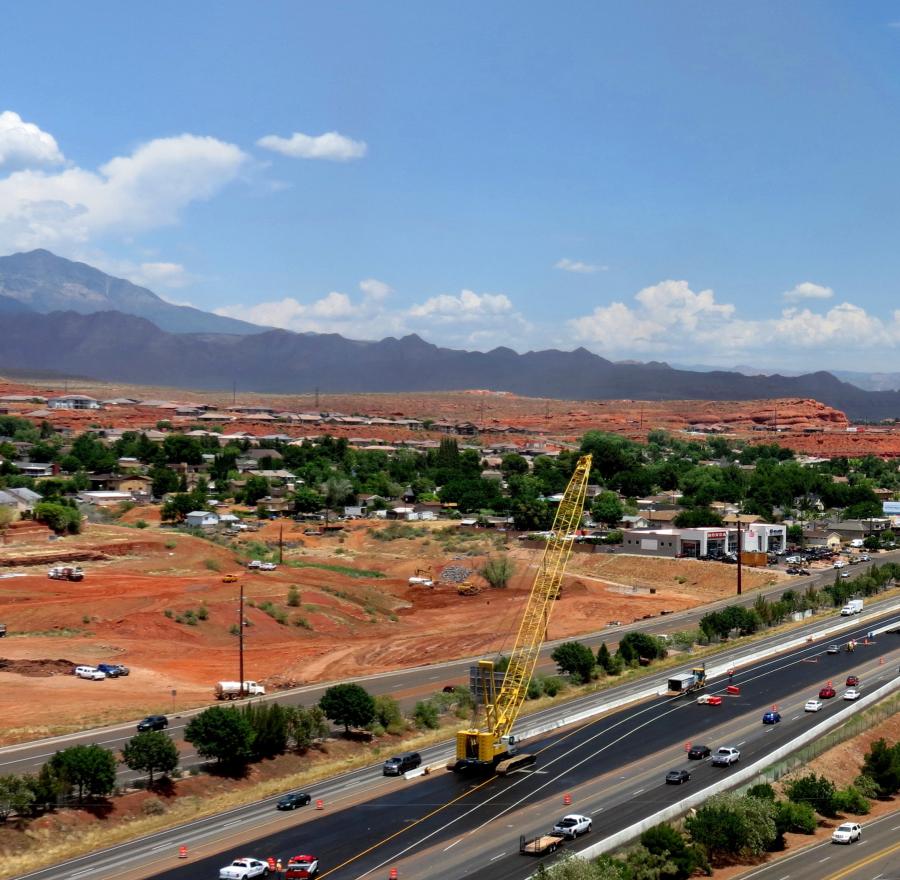 Work started last spring on a $21.5 million project to add an additional lane in each direction on a 2-mi. (3.2 km) stretch of I-15 from St. George Boulevard interchange in St. George to Green Springs interchange in Washington, Utah.

Work started last spring on a $21.5 million project to add an additional lane in each direction on a 2-mi. (3.2 km) stretch of I-15 from St. George Boulevard interchange in St. George to Green Springs interchange in Washington, Utah. The project is a partnership between UDOT and the city of St. George.

While reducing gridlock, the project also aims to improve access for local traffic trying to cross the freeway. The added lanes will provide access to commercial properties along the route. That could have a positive impact on jobs and the local economy and will promote regional mobility in St. George.

The project provides a new underpass beneath the freeway in front of Red Cliffs Mall, which will connect Red Cliffs Drive and Red Hills Parkway, improving mall access for local traffic and alleviating congestion at the interchanges. The new underpass is designed to accommodate the added freeway lanes and will have new traffic signals.

I-15 will have three travel lanes in each direction between interchanges 8 and 10, with ramps to and from each of the interchanges.

Utah's Transportation Investment Fund is paying for the new lanes, while the city of St. George provided funds for work on local streets connecting to the interstate.

A quick turnaround is planned for the project, with the new lanes and the underpass scheduled to open by Thanksgiving. The work is being done quickly because of close coordination between UDOT and the city of St. George, use of state funding, long-term planning and minimum grade changes in the roadway. Utah uses “Price + Time” contractor bidding to aid in expediting project delivery.

The area between the interchanges was considered a “choke point” on the I-15 corridor in southern Utah. Officials expect that the additional lanes and underpass will loosen the busy Green Springs interchange.

The entire project is set to conclude on Dec. 23 of this year.

“The city could potentially experience some delay to opening the local Red Hills Parkway section of the project due to additional utilities and small right-of-way needs,” Kitchen said.

This project is identified as part of an I-15 Environmental Assessment covering 16 mi. (25.7 km) of I-15 beginning at the Arizona border. A series of workshops aimed brainstorming and refining engineering possibilities within the context of local needs aided in determining the underpass placement, which in turn avoided grade changes to mainline I-15.

The contractor for the project is Wadsworth Brothers Construction of Draper, Utah. Kim Manwill is the project manager and Ray Bentley oversees construction as resident engineer.

Kitchen said that nearly all the work is being done during daytime hours. Night work has only taken place on a few occasions.

In the northern part of the state, crews are wrapping up a $68 million project that adds an inside lane on I-15 in each direction between SR-134 in Farr West and U.S.-91 in Brigham City, and improves existing ramps and interchanges along the route. The project, known as Lane Gain, stretches for 13 mi. (21 km) along I-15. Funding is provided through the State Transportation Improvement Fund.

Work on the project began in March and is scheduled to conclude this fall.

John Gleason, UDOT spokesman, reported that traffic delays associated with the project are expected to be minimal, because most of the work will take place in the freeway median.

Although I-15 is a rural freeway from Farr West to Brigham City, it leads to a growing industrial area from Provo to Ogden in northern Utah. Widening of I-15 is expected to improve traffic flow and allow for a growing number of trucks bringing food and goods into the state.

“Gridlock has not been a problem on this section of freeway,” said Vic Saunders, communications manager at the UDOT region one office. “But more and more trucks are coming north to the new manufacturing plants in the area, so it could become more so in a few years if this project was not added.”

The project includes bridge widening at four locations and utility work at the northbound Perry Rest Area through fall of this year. The rest area will remain open with limited parking available.

Crews are working on the expansion of I-15 by one lane in both directions, between Hot Springs, Utah, and Brigham City, Utah. Work is being done along both the northbound and southbound lanes days and nights.

The project has a unique feature consisting of a four-feet-wide strip of grass between the inside lane and the center median barrier. The strip of grass will cover a drainage system that will allow water on the freeway to drain into the grassy area and then be funneled away continuously from the roadway.

Geneva Rock Products of Orem, Utah, a division of W.W. Clyde Companies, is contractor for the project. Rod Terry is project manager.

Crews will apply about 70,000 cu. yds. (53,529 cu m) of concrete for the project. Because new lanes are being constructed, very little concrete was removed, Saunders reported.