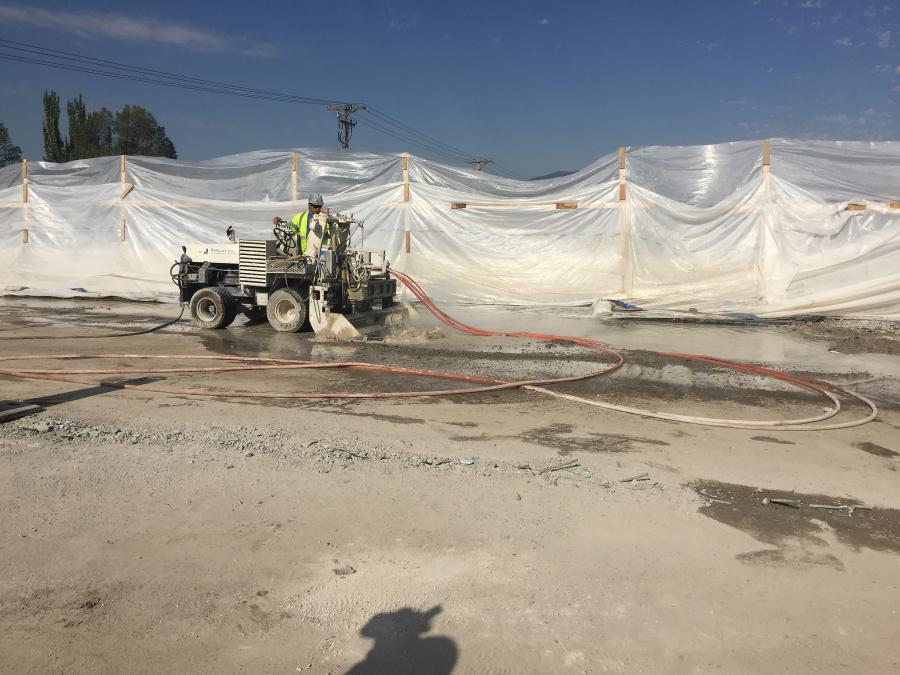 The Utah Department of Transportation (UDOT) is utilizing an innovative system of high-pressure water jets to refurbish bridge decks on the I-215 project.

The Utah Department of Transportation (UDOT) is utilizing an innovative system of high-pressure water jets to refurbish bridge decks on the I-215 project. This is one of the first times UDOT has used this hydro demolition process to reconstruct a bridge deck, and the first in the Salt Lake Valley. Hydro demolition will allow crews to be more precise while refurbishing the bridge, which saves time and money.

“While we are reconstructing I-215 with all-new concrete pavement, we also want to preserve what we have where possible,” said Oanh Le Spradlin, UDOT project manager. “Utilizing an innovative tool like hydro demolition helps us accomplish that on several bridges without spending the money on a complete rebuild.”

Hydro demolition is being used to remove the top few inches of the pavement on two I-215 bridges (3500 South and 3800 South), leaving much of the pavement and the reinforcing steel intact. Other demolition methods potentially could cause structural damage and require more extensive repairs, extending the schedule and increasing costs. Using hydro demolition to remove and replace the concrete bridge decks will extend the life of the bridges by 15 years.

The hydro demolition process utilizes a machine that moves over the bridge, spraying water to remove the top 3 to 4 in. (7.6 to 10 cm) of the bridge deck. This machine sprays water at up to 36,000 psi — up to 24 times more powerful than the average home pressure washer. After a few passes, a cleaning crew comes through and sucks up all the water and material with a vacuum. The vacuum uses a water jet — similar to a dentist doing a teeth cleaning — to dislodge debris and then suck it up.

The hydro demolition machine sprays 15,000 to 17,000 gal. (56,781 to 64,352 L) per 10-hour shift (about the amount needed to fill the average in-ground backyard pool) — which is collected on site, pumped into tanks, filtered and then sent to a treatment plant and recycled back into the system. All of the vacuumed materials are ground and reused as road base on construction projects.

During construction, all four lanes of traffic will remain open in each direction during the morning and evening commutes. Most work, along with the necessary lane restrictions, is scheduled at night to reduce delays for the more than 100,000 cars per day traveling this section of I-215.

Crews are making significant progress on the I-215 reconstruction – UDOT's largest project of 2016:

• New asphalt has been placed in the westbound lanes of I-215 from 300 East to Redwood Road.

• Some concrete paving is already done in the freeway median from 4700 South to 3500 South.

• The reconstructed ramp from southbound I-215 to eastbound S.R. 201 is now open.