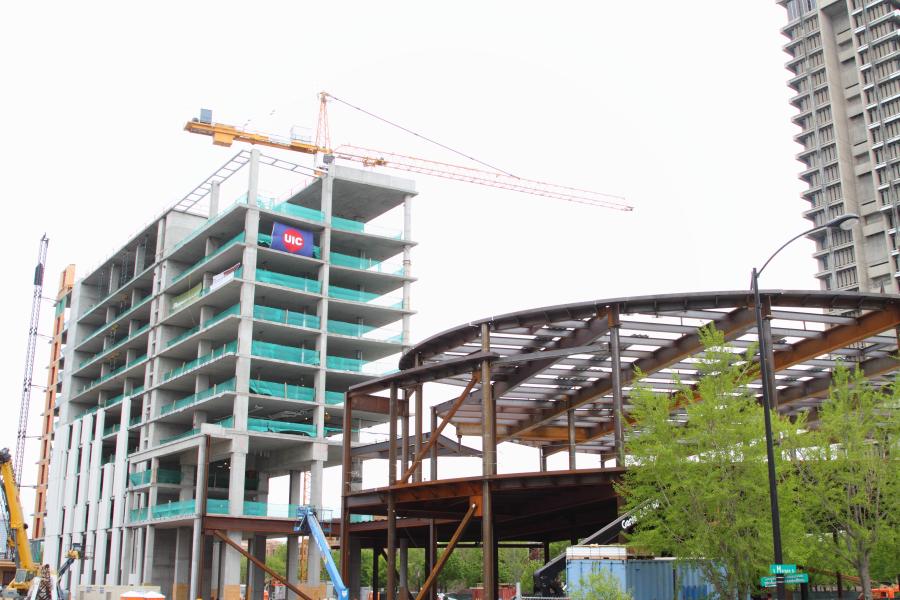 The new “living-learning” community will provide both residential and academic spaces for students at the University of Illinois at Chicago. Approximately 550 students will occupy the new tower. (UIC/Jenny Fontaine photo)

A $100 million “living-learning” community that will provide residential and academic spaces for students at the University of Illinois at Chicago (UIC) is making significant progress. The 10-story building will stand adjacent to the Chicago Transit Authority's recently renovated Peoria Street bridge and Blue Line station, with views of the city's skyline.

“The university has experienced tremendous growth over the last decade,” said UIC Vice Chancellor for Student Affairs J. Rex Tolliver. “The university has led all institutions in Illinois in terms of increases in student enrollment over this period. This growth has a need to increase both classroom space, as well as residential space for students.”

Construction began in December 2017 and is expected to be complete in July 2019. Approximately 550 students will occupy the new tower.

“The reaction has been very positive on campus,” said Tolliver. “I've really been amazed with the response within the University of Illinois System, as well as the city. It's a great location with adjacency to the 'L' and the core of campus. This location provided us the space to allow for the future replacement of the existing student housing on the corner of Harrison and Halsted.

“It's exciting to see the project move as quickly as it has. It has been nearly three decades since we built either a residence hall or classroom building. The P3 has afforded us an opportunity to move very quickly in bringing this project to fruition.

“It's the first of many projects as we seek to improve the quality of student life at UIC. The project is a testament of what can be done when the public and private sectors work together,” Tolliver said. 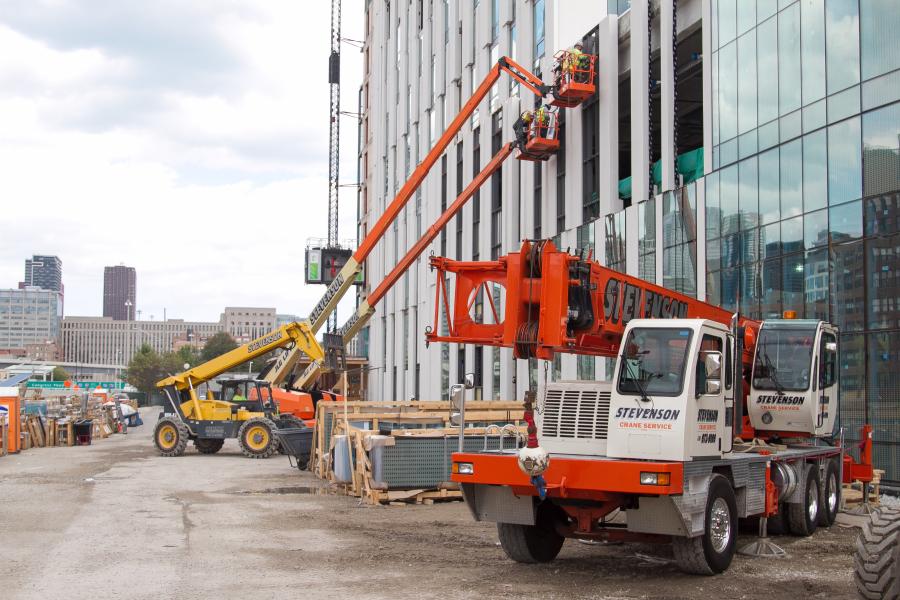 According to Pepper Construction Project Executive Marty Platten, the building has a complex exterior envelope that has been challenging to coordinate. Close coordination was required between the cast-in-place structure, the precast panels, the windows and the various air and moisture barrier systems required to provide a complete and weather-tight enclosure.

“The shape of the academic building has also been a challenge to coordinate. It actually contains a number of different tangent points to create the irregular ellipse shape.”

Intense coordination was required for the steel structure and the various enclosure systems. The steel fabricator utilized a Tekla 3D model regarding the various challenging transitions of the building, and the curtainwall fabricator also modeled much of the work three-dimensionally to ensure proper fit.

Windows are currently being installed on the exterior of the residential building. Framing and drywall are progressing on five floors. In addition, MEP/FP systems are continuing to be roughed in on all levels. Elevators are also being installed.

Curtainwall is being installed around the perimeter of the academic building. Roofing is nearing completion. MEP/FP systems continue to be installed, as well.

The elements have been a factor, but the project has remained close to the number of allotted weather days. Envelope enclosure is roughly six weeks away. Key tasks yet to be carried out include interior finishes and site work that includes hardscape and landscape.

The existing site was a grade-level parking lot. The only clearing involved the existing asphalt pavement. As for unexpected issues, the water-main connection needed to be relocated due to conflicts with existing utilities in the adjacent streets.

The site is surrounded by student pedestrian traffic on three sides, and an interstate highway on the other.

The welfare of the students and general public just outside the site is always a top priority, and measures are taken to ensure the safety of all persons near the site at all times. A full-time safety representative has been present at the site since the building went vertical. 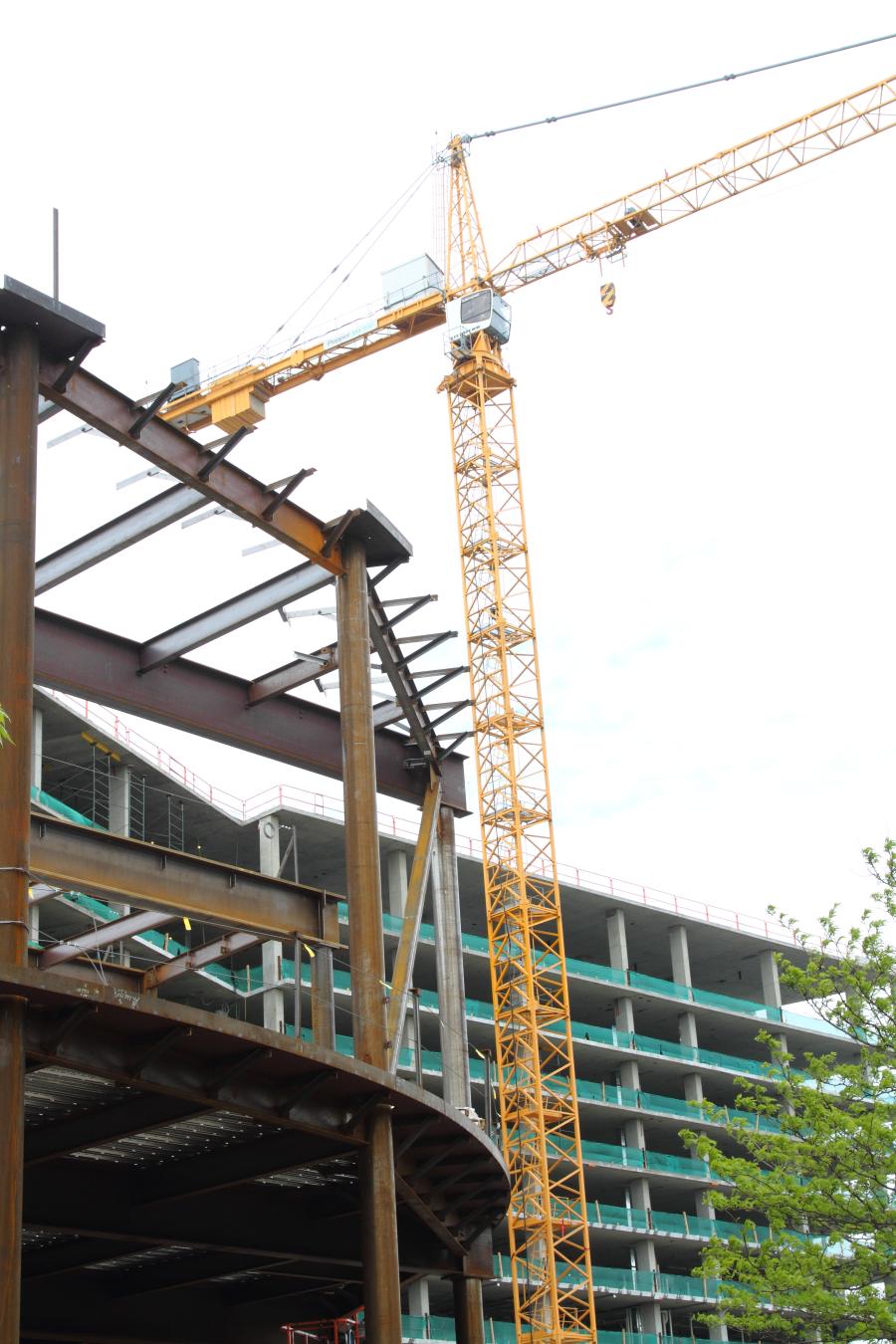 A tower crane is being used during construction, along with all-terrain cranes of various sizes, excavators, loaders, telehandlers, skip hoist and lifts.

Kristy Cubas, associate principal with the Chicago-based international architecture, interior design and planning firm Solomon Cordwell Buenz, said one of the main goals was to create a structure that recognized the urban campus context and enhanced social and physical connections to the city while maintaining a residential collegiate aesthetic.

It was also important to make student life visible and integral to UIC's continued growth from a commuter campus. Reinforcing and promoting student connections through transparency between interior program spaces and the outdoor environment was another consideration.

In addition, it was important to celebrate the iconic design of the original campus by echoing the geometric movement expressed in Walter Netsch's master plan. This called for contextually blending with the campus while fostering the architecture and design of today.

“The project is fast-track and the schedule is aggressive,” said Cubas. “However, the university developed the program for both the academic and residential spaces months in advance and were fully prepared for the design team. The team's expertise in student housing and academic design fostered collaborative workshops with the university throughout the design process.

“The idea of combining 50,000 sq. ft. of academic space with student residential is unique to higher education. The creative team was able to capture the benefits of a robust live/learn environment for academic success and expand student life through shared amenities, simplified operations, single point of control and a supportive academic environment.” 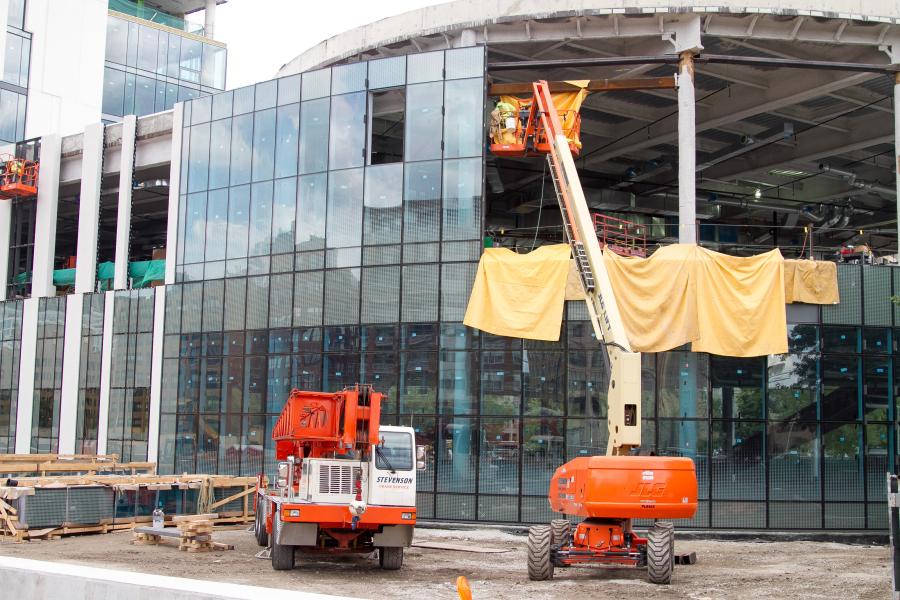 Said Cubas, “UIC is an urban campus with hard edges conforming to the city grid with limited outdoor connections and landscaping. To soften the edges and introduce active landscape areas, the new building is set back from Harrison Street, affording a large plaza for student gathering. The academic program incorporates open group study and collaboration areas or 'oasis' space on the ground floor with direct access to the outdoor environment. An additional secure residential patio is located on the north side of the building with a fireplace and direct views to downtown Chicago.”

Many large-tiered classrooms on the UIC campus and at other universities are buried within buildings and disconnected from natural light. The goal for the design team was to improve the environment of tiered classrooms and introduce daylight as a major feature within the classroom aesthetic. Significant studies were conducted to analyze solar gain and glare for the student and instructor areas. A combination of frit glass and exterior metal blades integrated into the unitized curtain wall glazing system addressed specific glare issues derived from a solar analysis.

“The exterior design is modern and utilizes a white precast panel system to facilitate construction schedule and complement the campus aesthetic,” said Cubas. “Over 70 precast panel types were utilized for the enclosure. The design team worked with the precast subcontractor to design only three forms to facilitate all the panel variations and optimize delivery. The precast has modulation and depth expressed with three-inch projections incorporated into the panel design. The result is an active and dynamic façade.”

Spandrel glass is incorporated in the overall tower façade pattern to reinforce exterior visual movement, while maintaining a consistent window location for the individual units based on room furnishings. A hybrid window wall system was utilized to extend the glazing in incorporate slab edges. This particular system expands the appearance of glass that knits the precast panels on together on the exterior without utilizing more expensive curtain wall. 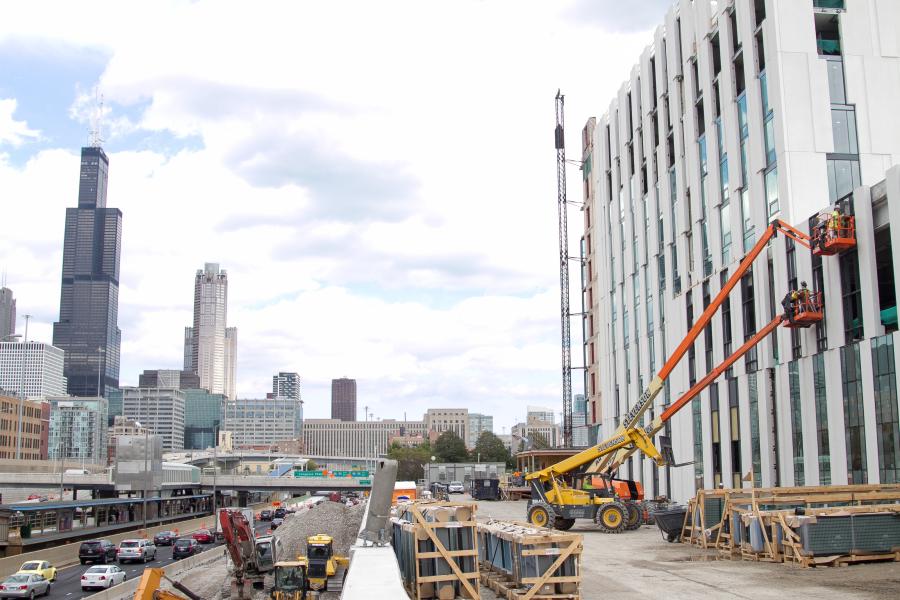 “The site is located on the north edge of campus along the 290 Interstate Freeway and adjacent to the blue line train station which is a major public transportation hub for students,” said Cubas. “The iconic University Hall which is part of the original campus design is directly south of the site and adjacent to a significant undergraduate housing population. The building massing celebrates the views of the building from the interstate, campus and train station. Strategic placement of social and study lounges staked up the tower focus views to downtown Chicago and the campus to the south with panoramic views.”

The two-story academic pavilion interconnected with the residential tower was analyzed extensively to maximize daylighting while minimizing, if not eliminating, any negative glare for the students and instructor. The final design provides a patterning of frit and vertical fins that directly respond to projected glare patterns from the enclosure glazing.

“The goal of the design team for the building once completed is a robust student life hub on campus that reinforces the residential nature of the new UIC and promotes student success through active and passive study and collaborative areas within the building,” Cubas added.

UIC, the city's largest and only public research university, is recognized as one of the most ethnically rich and culturally diverse universities in the nation.