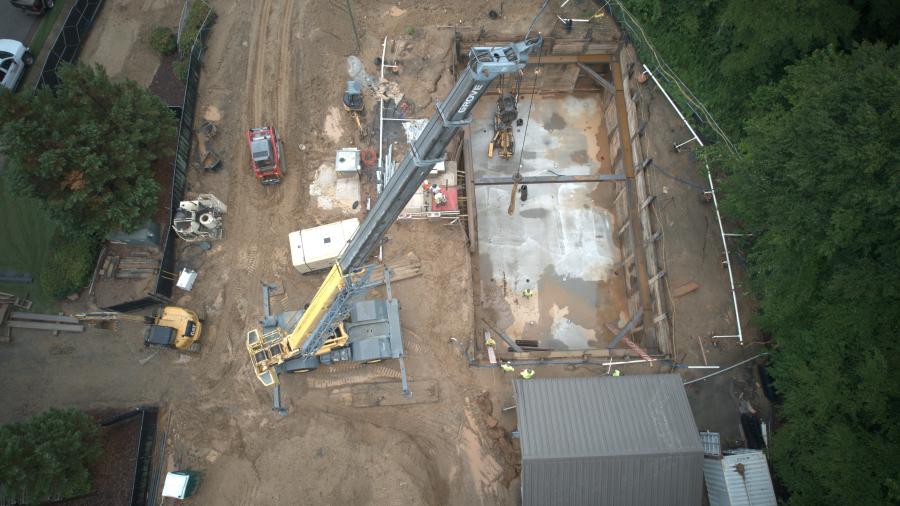 You need to build a stable foundation for improvements to a pump station but you're located in a 5-ft. water table within proximity to a creek. How do you keep the foundation from rising?

One Georgia county's engineer chose to pin it down with rock anchors and UMA Geotechnical Construction was the right fit for the job.

Located within proximity to Blankets Creek in Canton, Ga., the water table is known to fluctuate. UMA's sole function was to install a rock anchor system to keep the pump station's concrete slab pinned down. The components to be built on top of the slab would be a diesel engine-driven centrifugal pump and a concrete cast-in-place emergency storage tank. 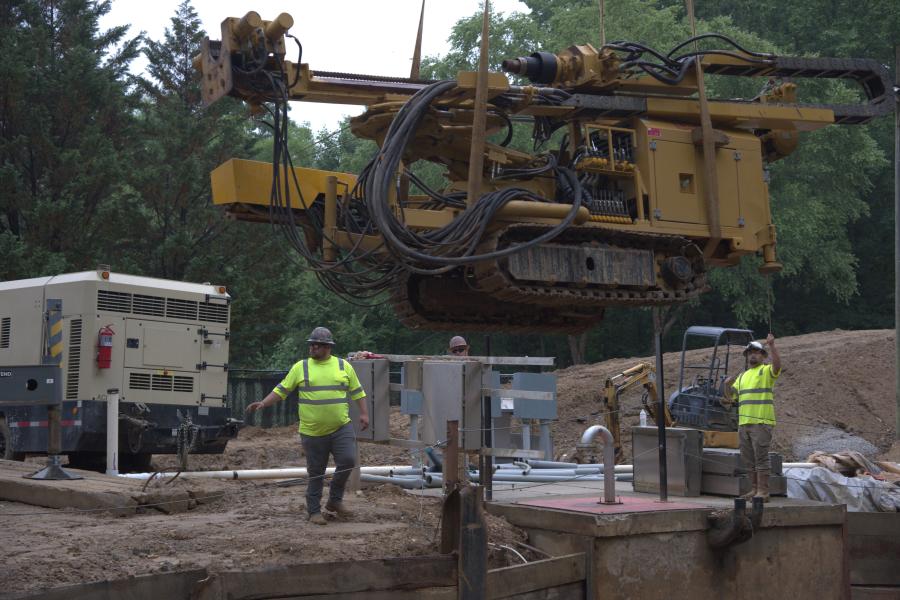 Working Down in the Hole

One of the biggest challenges for UMA's team was working in a 23-ft.-deep-by-56-ft.-wide excavation. Lakeshore Engineering had excavated the pit and installed a soldier pile wall with wood lagging. Tied off workers accessed the pit via ladders.

"We're working in a pretty tight area compared to what we're normally used to on highway projects," said Crayton. "It's not the smallest footprint we've worked in, but it's a lot smaller than our usual working space."

Lakeshore Engineering installed a mud mat to provide a stable working surface for UMA's drilling rig and to keep the work site clean. There was no air movement so air was pumped in from ground level and circulated with fans to keep workers from breathing in diesel fumes.

The working area had to be dewatered also due to the proximity of Blankets Creek and a water table approximately 5 ft. below the ground. While the failure of dewatering pumps would not have been cataclysmic, the potential slow accumulation of water in the working area could have damaged equipment.

One of the visual spectacles on the project was Lakeshore Engineering using a crane with rigging to lower a Beretta T46 drilling rig into the excavation as UMA's team provided direction.

"It's a smaller machine, but we selected it for this purpose," Crayton explained. "It doesn't quite get the production that we're typically used to, but it can hold its own with this smaller hole size."

UMA's crew was seasoned and used to working together. They also were familiar with the equipment and how to rig it based on past projects.

"We shut down around Christmas every year for safety and for training," Crayton said. "We alternate between first aid, forklift certification and crane and rigging so that everyone is safe on the job site. That's always our number one concern." 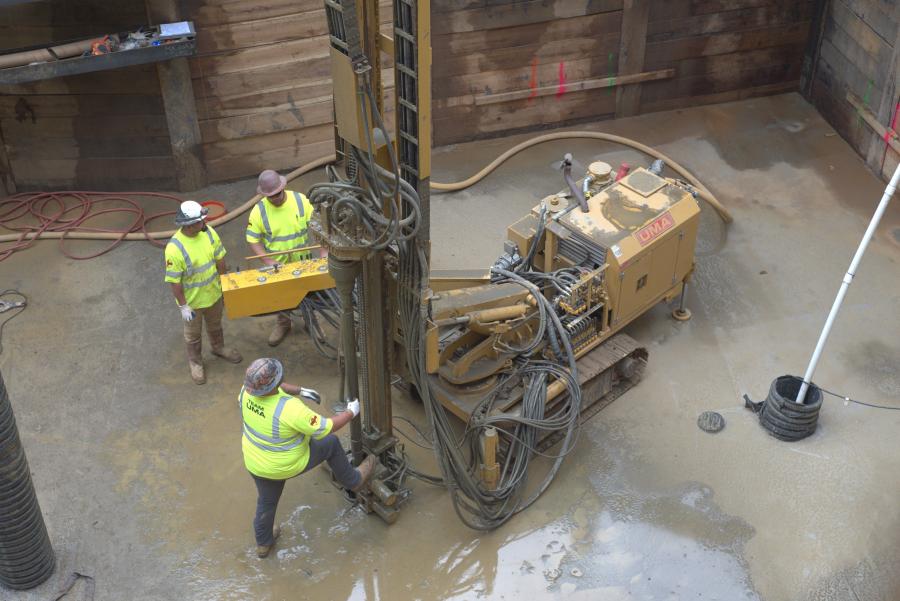 The drilling rig was equipped with a down-the-hole hammer with a 4½-in. bit to drill rock sockets.

"It was critical to make sure these [rock anchors] worked because it would be very cost prohibitive to move them," said Crayton. "If even one failed, they would have to change reinforcing plans and the connection details of the slab foundation to the actual structure."

The Beretta was drilling a minimum 4.25-in.-diameter hole 15 ft. down to bedrock with permanent casing supplied by Star Iron Works. The drilling crew had to focus closely on ensuring that the anchors were plumb and in the exact location specified.

The material was higher quality partially weathered rock, although the crew hit a high-quality bedrock in a handful of areas. The team then drilled into bedrock with a 10-ft. rock socket.

"Our drillers are schooled enough to distinguish between the materials they're drilling through," said Crayton. "One drills a lot slower than the other and they can hear and feel the differences."

The Beretta was equipped with a down-the-hole hammer with a 4½-in. bit to drill the rock sockets. This tooling fit perfectly inside the casing, allowing the cuttings to be extracted onto the mud mat before being plowed away with Lakeshore Engineering's Takeuchi skid steer loader.

"We drill down into a specific rock socket, place our anchors, and lock them all to that slab," Crayton explained. "That's how we end up with our rock anchor system." 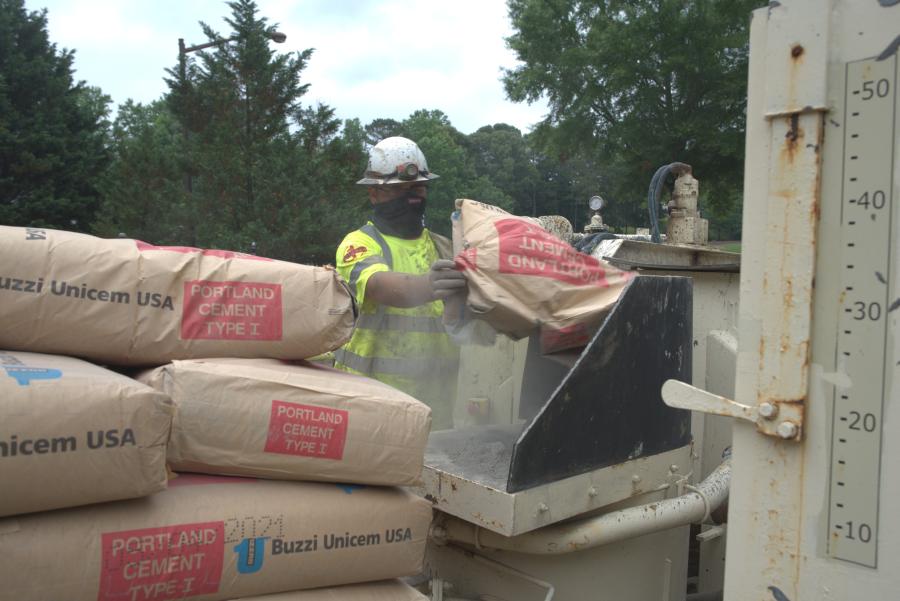 The grout used to secure the rock anchors was mixed onsite with a batch plant.

UMA conducted two extensive performance tests to ensure that the anchors were of sufficient strength to support the pump station. Movement was essential also.

"These anchors are basically like high-strength rubber bands," Crayton said, noting that the anchors are designed to move. "Anything that moves has some sort of desire to go back to where it was. When they flood this pit with water, the anchors will keep the slab and pump station from rising."

Testing requirements placed some restrictions on the schedule. UMA was only permitted to install two anchors on the first couple of days, and conduct a load test to demonstrate that capacity was achieved before installing the third. This pattern continued throughout the project.

"We worked with Lakeshore closely to help speed up their construction process and get out of the way so they could finish their job," Crayton said. "The main way we expedited our work was to lock off the anchor to a mud mat using a secondary bearing plate."

The double bearing plate system had one bearing plate locking the anchor to the mud mat and one suspended in the air to transfer the loading to the foundation. UMA was able to get all of the testing completed at one time under the initial mobilization. This permitted Lakeshore Engineering to set a bearing plate at a certain elevation and pour the structural slab without having to wait on a remobilization for final stressing. This allowed a majority of the elastic elongation to occur prior to the final placement of slab, ultimately saving the contractor time and money. 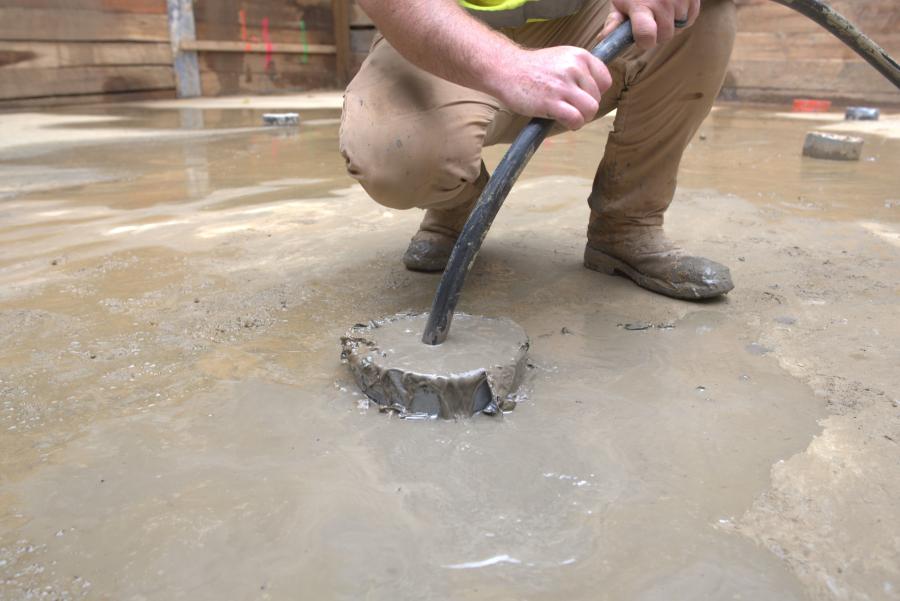 Batching and Grouting to Lock in Anchors

UMA grouted the rock anchors in place. The material was mixed in a batch plant on site with a specific gravity of 1.85 to 1.86. Its team is trained to check specific gravity prior to pumping, and a third-party contractor was retained to take samples and ensure quality control.

This standard mix was one that UMA was accustomed to, and achieved the strength that was required on this project. The spec called for a minimum of 3,500 psi at three days and 5,000 psi at 28 days.

"The crew that was doing this job came off of a year-long soil nail project so they were used to drilling 30-ft.-long, 6-in. diameter holes, and four batches of grout at a time," said Crayton. "There's a pretty big difference between a rock anchor job and a soil nail job, and our crew adapted well to the switch."

The grout was pumped through tremie pipe to the bottom of the hole from within the casing. The casing sections were installed with the Beretta drilling rig, which was equipped with a special adaptor. UMA was performing a duplex drilling process, which involves drilling the casing and the hole concurrently. Once rock was hit, the casing was halted, and drilling continued with the inner rod.

UMA workers fed casing to the drilling rig by hand.

"Normally we would use an EZ Spot UR attachment on the excavator to handle large casing sections," Crayton said. "We had to use smaller pieces on this job because we didn't have the real estate to put them in the pit with us."

The majority of UMA's work on the Blankets Creek Pump Station project was done within a week and completed on schedule. Despite the technical nature of the work, the distance between the job site in Georgia and UMA headquarters in Colfax, N.C., was the true challenge.

"Making sure that everyone who needed to observe different processes was onsite during the installation and load testing was our greatest challenge," said Crayton.

"That's generally the hardest aspect of most of our projects: the distance between the field where the actual work is done and the office where the computers are required to do the analysis." 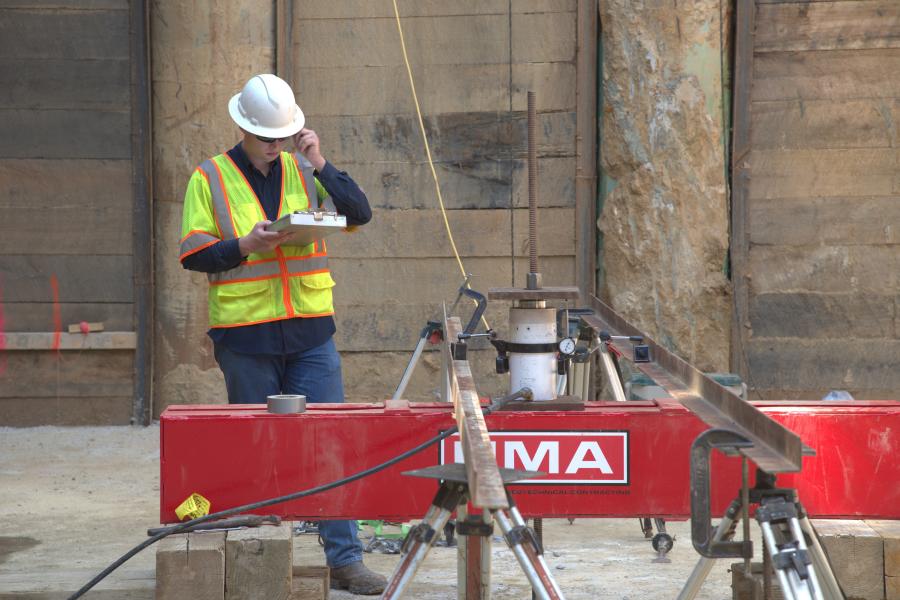 UMA conducted two lengthy performance tests to ensure that the anchors were of sufficient strength to support the pump station.