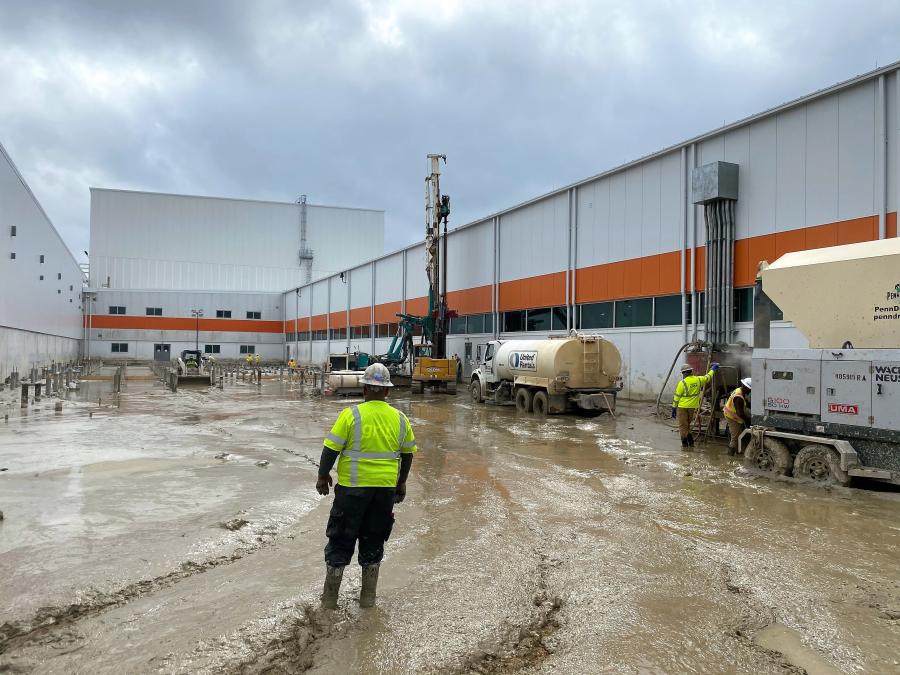 UMA worked two shifts to install more than 300 micropiles to support a fabrication facility addition for a global manufacturer in Goose Creek, S.C.

Specialty subcontractors like UMA Geotechnical Construction Inc. (UMA) rarely get the credit, but the work they do often lays the foundation for stimulating the global supply chain. The North Carolina-based contractor worked two shifts to install more than 300 micropiles to support a fabrication facility addition for a manufacturer in Goose Creek, S.C.

UMA's Team overcame the odds by procuring the project through a high-pressure process called the Japanese Reverse Auction. While common overseas, this was new territory for a geotechnical contractor serving the Mid-Atlantic United States.

The first step was for all interested contractors to email a proposal to the owner. The owner then posted the highest bid on the internet for all to see. The Japanese Auction leaves bidders in the blind, so UMA's Team had no information on the other bidders.

Every minute, the bid would drop by $10,000, and bidders would be asked if they were willing to accept that number. Once they confirmed, the timer would restart before the price was lowered again. This process was repeated until the lowest possible bid was achieved.

UMA had to determine how low it was willing to go.

"Our approach was to predetermine our rock bottom number," said UMA President Brian DeSpain. "After finding out the bidding process, we went back to our estimate sheet and we creatively found the most cost-effective and productive route to install the piles."

UMA ended up securing two of the three phases of the addition in November 2019, including an addition to the fabrication building (Building F) and an expansion to accommodate the massive turntables used by the manufacturing facility (Building J). 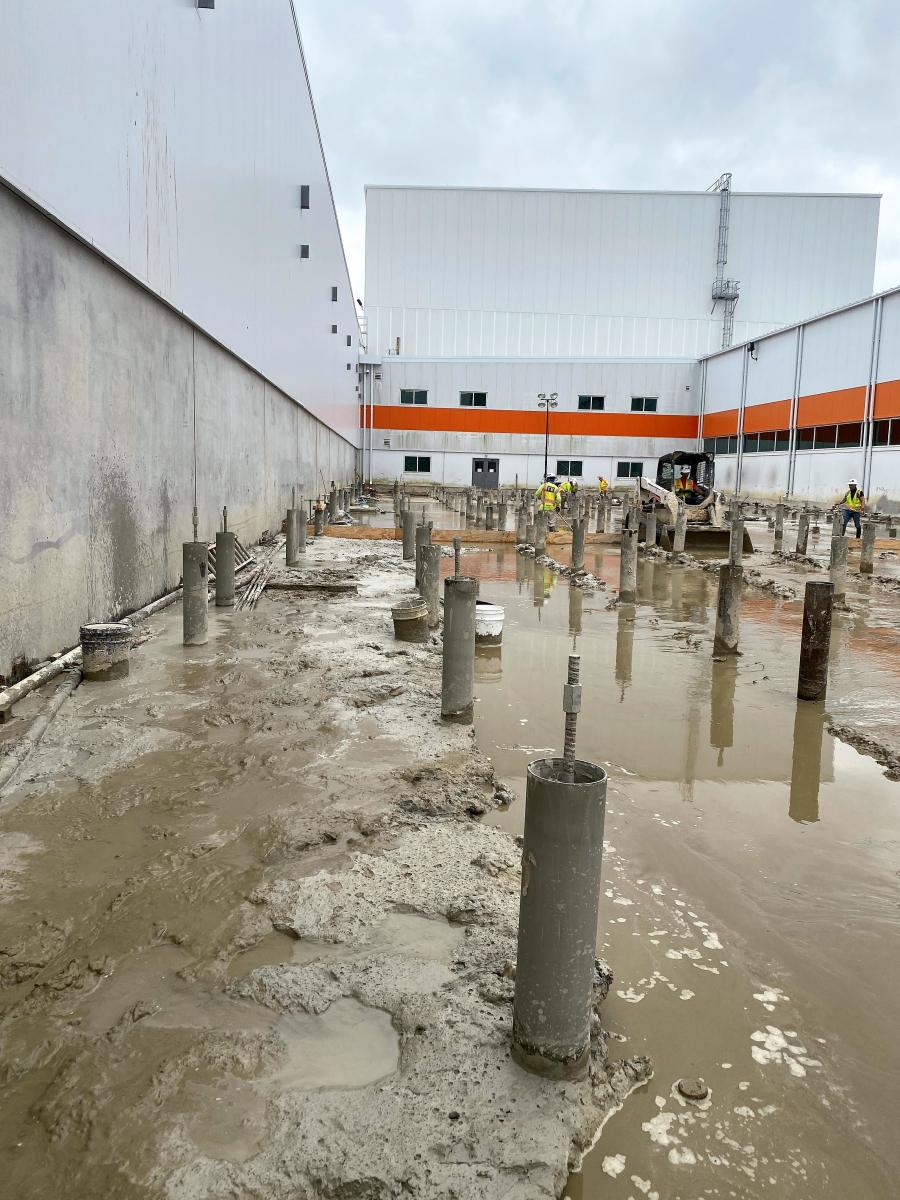 Among the complexities of the project was the sheer volume of micropiles to be installed – 304 to be exact. The first phase, Building F, contained 290 piles, and Building J contained 14.

Team UMA hit the site during Christmas of 2019. The first test pile was installed in late December and load tested in January. Two load tests were conducted at 480 kips. UMA designed piles to achieve loads of 240 kips for Building J, and 200 and 240 kips in Building F. 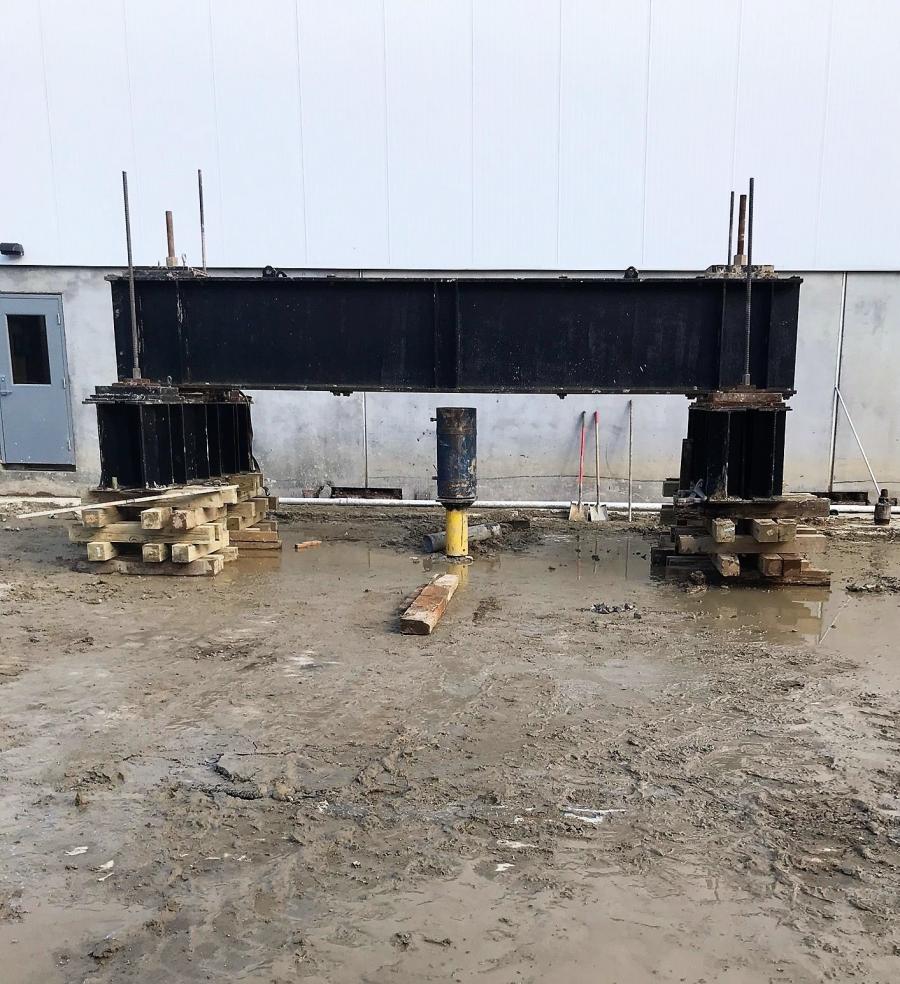 UMA started production shortly thereafter, installing (or drilling) 20-plus piles per day and working two shifts. The job was finished before the February deadline. Once the micropiles in Building F were completed, UMA left for a month before returning to finish up the 14 piles in Building J.

UMA was initially supplied with a geotechnical report from Charleston, S.C.-based Terracon. Although it was thorough, geotechnical borings are only guaranteed accurate at the boring. The distance between borings can vary and so can the soil characteristics.

"They basically said, here's the geotechnical report and the spacing we want to try to utilize," said DeSpain. "Our job was to come up with the diameter, depth, and means and methods used to install the piles.

UMA worked with general contractor Fessler & Bowman Inc. and the owner's engineer to select a design-build deep foundation system that would meet their needs. The selection was a 7-inch Outside Diameter (O.D.) casing. The casing was installed the full length of the micropile for structural capacity, and the bond zone was pressure grouted through the casing. A 14 by 14 by 2 in. plate was attached to the top of each pile with a non-structural bar and nut and embedded in the structural concrete slab.

Team UMA laid out the micropiles 20 feet apart and in a perfectly aligned grid pattern. Fessler & Bowman followed up by pouring a multi-layer reinforcement slab for the foundation. 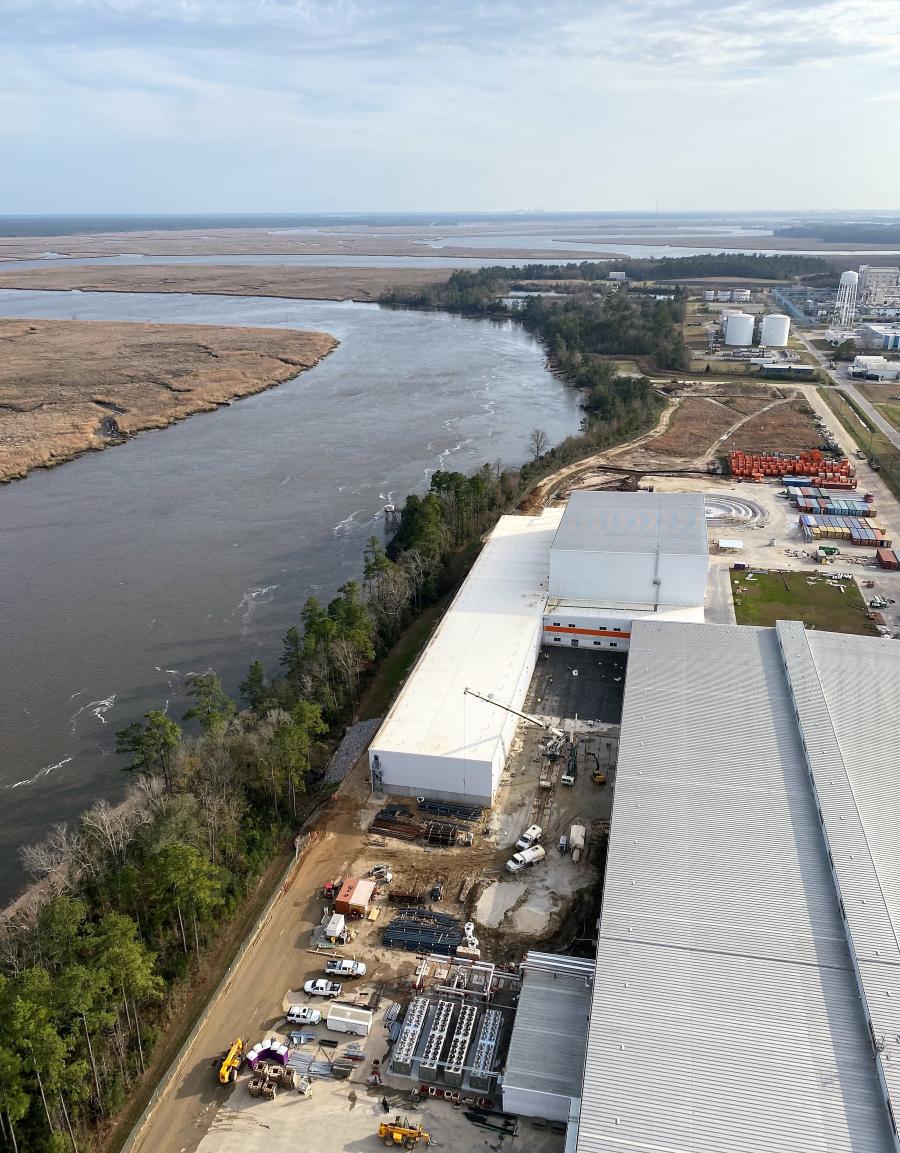 UMA's design-build skills were unexpectedly tested when its work was more than half-way completed. The contractor was informed that an additional four columns in the middle of the building would require support.

"They had us add four micropiles for each of the four columns," DeSpain said. "We continued construction, did a design and got it approved, and then implemented the new design while we were on-site without delay."

UMA used one if its specialty Casagrande C7 XP-2 crawler drilling rigs for all micropile drilling. It worked in tandem with an excavator with an EZ Spot UR attachment, which fed casing sections to the rig. 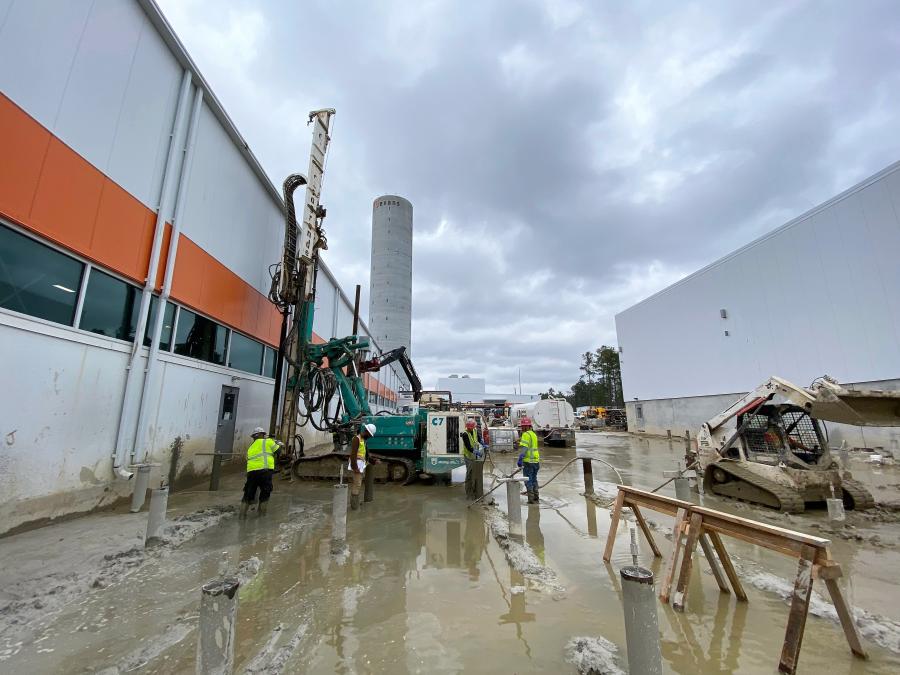 A positive displacement pump supplied water to the C7 during drilling to flush the casing sections down to depth. The benefit of such a pump was that it supplied a constant flow and pressure of fluid throughout the process.

UMA's goal was to use the longest sections of steel possible. The C7 is equipped with a 30-ft. stroke so the team was able to install a 30-ft. section for the first piece, followed by two 25-ft. sections.

UMA utilized a Penndrill cement silo to reduce labor and increase production. Positioning it above the grout plant allowed cement to be loaded directly from truck to silo without breaking open and dumping each bag. 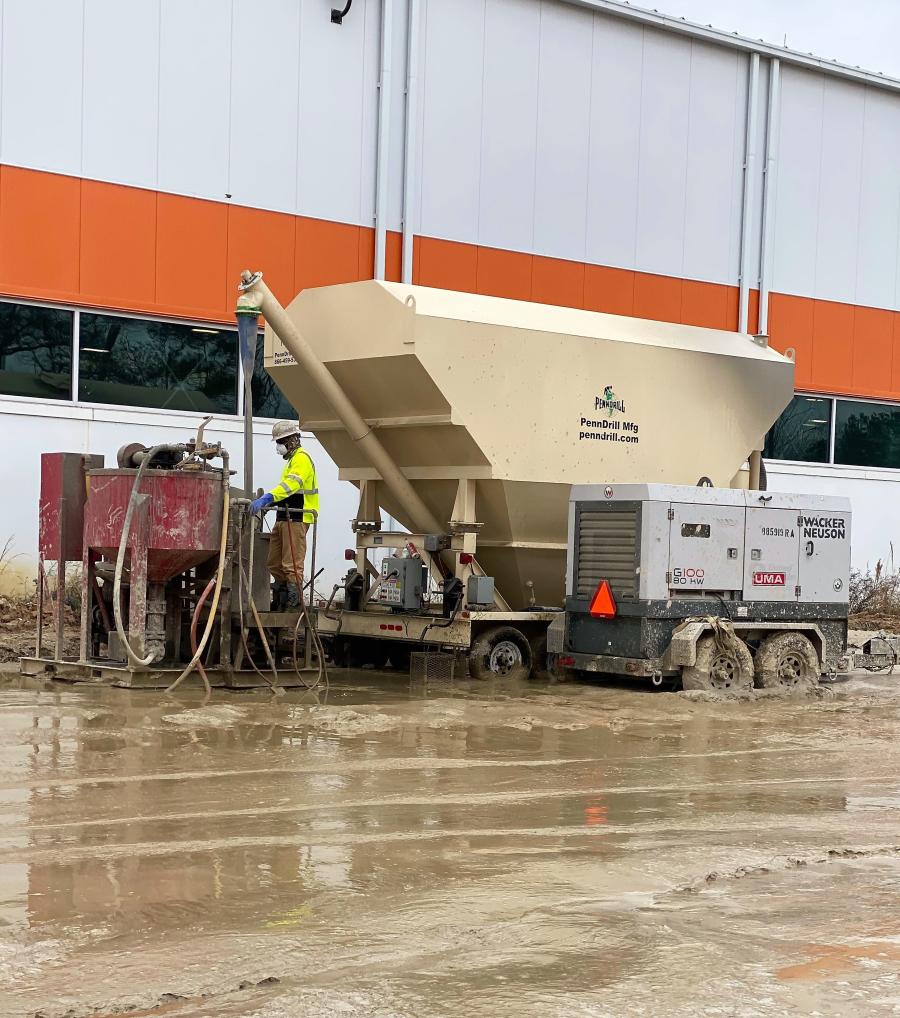 After penetrating a layer of black organic, silty sand, UMA was drilling through Cooper Marl, which is a soil formation prevalent in South Carolina's Lowcountry Region along the coast. The contractor is no stranger to drilling in this material.

"Seashells, organic matter and sand layered on top of each other, and compacted more and more over millions of years, and formed this really dense sand layer that is commonly referred to as Cooper Marl," explained DeSpain. "It's interesting when you drill in it because this mixture of material from millions of years ago comes up out of the ground."

The bond zone for the micropiles fell within the Cooper Marl layer. UMA drilled the piles to an average depth of 70 feet, although it fluctuated because the layer was 50 feet down on one side of the site and 25 feet in the other section. 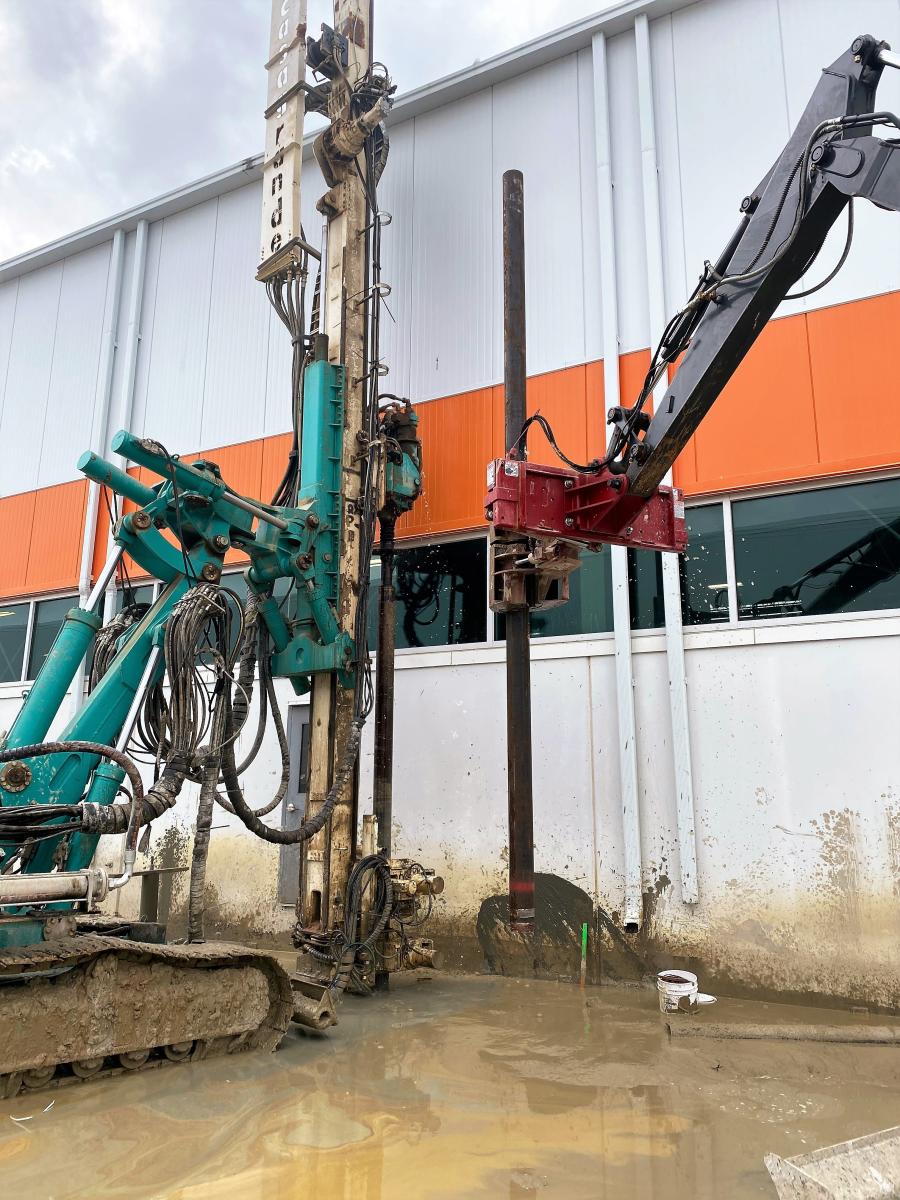 The Cooper Marl acts like a degradated rock during drilling so the hole will stay open. The wet sandy overburden layer above; however, collapses into the hole. This required UMA to tap OCI Division of Global Drilling Supply in Brookville, Pa. to make a special drill bit it has used several times since 2011. OCI also supplied all casing for the project.

"When you drill below the water table, the pressure required to overcome the hydrostatic head pressure increases by approximately one atmosphere every 33 feet," DeSpain said. "You want to be able to push fluid out of the bit, but you don't want fluid or cuttings to come back in the bit. This bit only lets the water go out, which allows us to flush the cuttings from around the outside of the pipe back up to the surface."

Fessler & Bowman had covered the entire site with a mud mat before UMA fired up the drilling rig. This was basically a concrete slab to serve as a stable working platform on this muddy site.

The sediment removed by the drilling rig accumulated on the mat as the drill cuttings were expelled from the hole. UMA deployed a skid steer to plow that waste off the mat and into a pile where Fessler & Bowman allowed it to dry out before removing it from the site.

UMA's team worked from the inside to the outside of these U-shaped parcels. "Once we got about halfway done, Fessler & Bowman came in and blocked off half of it the parcel and started tying all the rebar cages," DeSpain said. "They had already poured the first half of the concrete at about the same time we finished drilling the last pile."

When all was said and done, UMA had completed 304 micropiles by the February 2019 deadline. It took Team UMA working a double shift, deploying its fleet of specialty foundation equipment, and its past success working with the unique Cooper Marl Formation. The result was a strong foundation that would allow this global manufacturer to increase production and further stimulate the economy.

"The key to this job was installing a lot of micropiles at a high production rate," DeSpain said. "The owner had a really strict timetable and Team UMA delivered." 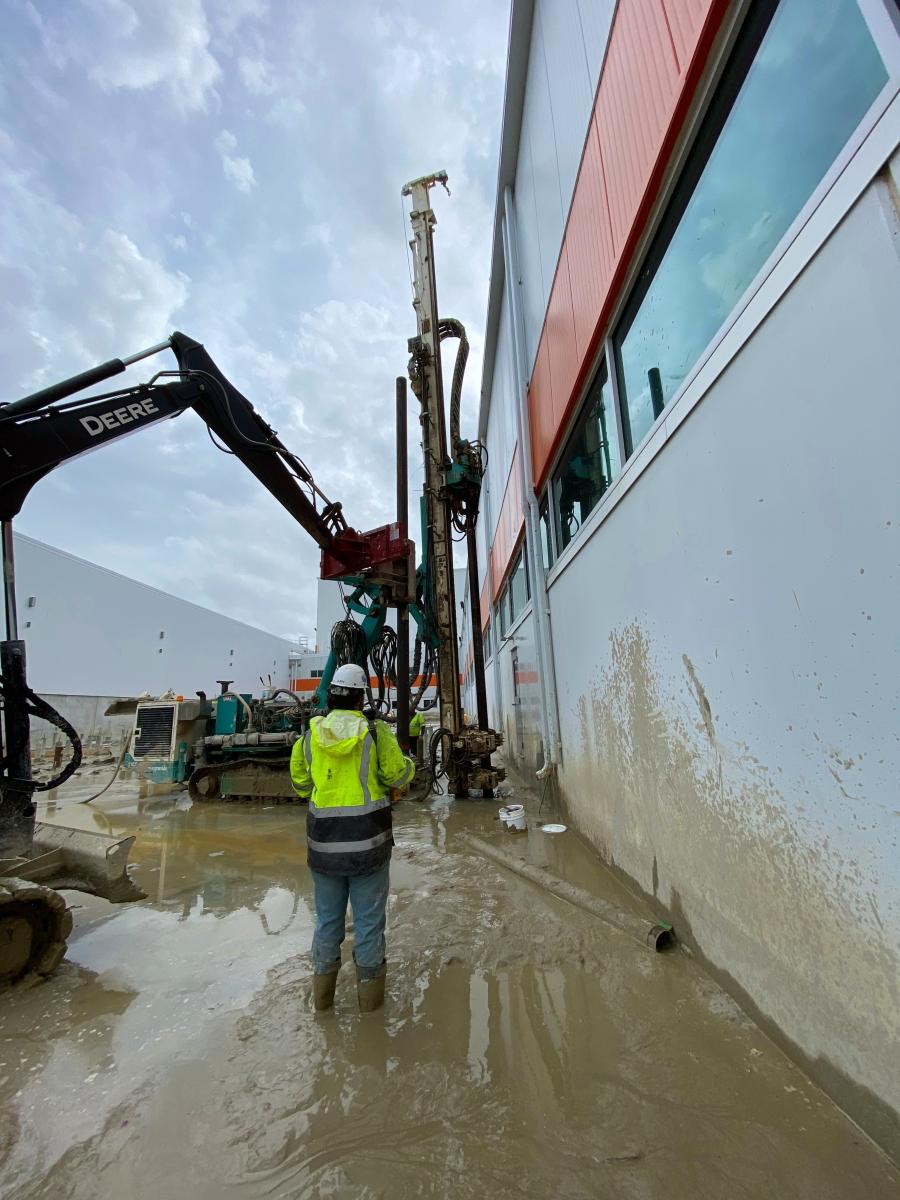