UMaine System to Use Much of $240M Gift for New Facilities 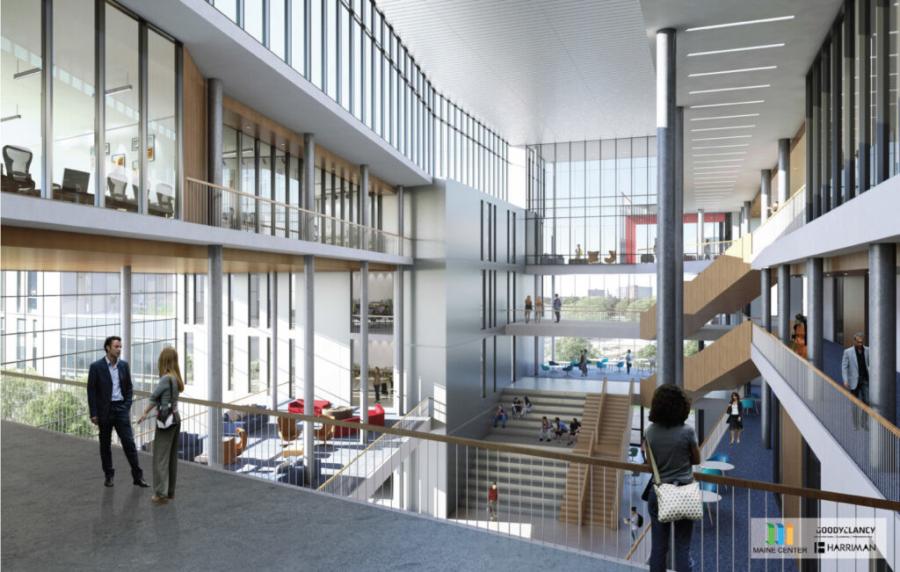 USM officials are planning for the construction of a new graduate center and law school. (University of Southern Maine rendering)

Administrators in the University of Maine System on Oct. 7 lauded a $240 million gift that is among the largest ever in public institutes of higher education and will be used for systemwide investments in facilities, academics and athletics.

Much of the funding from the Harold Alfond Foundation, one of the state's leading philanthropic organizations, will be spent on the University of Southern Maine campus in Portland. Officials there are planning for the construction of a new graduate center and law school.

"This is a combination of a year-long effort to explain the needs of the system to an organization that has been very generous in the past and an effort to come forward with new initiatives that obviously have attracted the support of the Alfonds," said UMaine System Chancellor Dannel Malloy. "They have been very supportive of the [university system] and the University of Maine in the past, particularly in athletics, but this is really groundbreaking in its scope and its investments in Maine's future."

The gift to UMaine is the eighth largest ever to a U.S. institution of public higher education and the largest ever in New England, according to the Chronicle of Higher Education.

At the University of Southern Maine (USM), President Glenn Cummings said the gift will help with the construction of a new graduate center and law school and expand the school's engineering program as part of the development of a multi-university College of Engineering, Computing and Information Science.

The engineering program will be led by the University of Maine in Orono and will provide for additional undergraduate and graduate programs at USM. Engineering will receive $75 million of the $240 million gift and use some of that money to further renovations of the Ferland Engineering Education and Design Center in Orono.

A total of $55 million of the foundation's gift will go toward, among other things, a new building to house the center and the University of Maine School of Law.

The Maine Center building on the USM campus has an estimated cost of $70 million, up to $40 million of which will come from the Alfond gift. It would tentatively be located off Bedford Street in the vicinity of the Glickman Family Library and the Wishcamper Center and across the street from where USM is planning to break ground this spring on a $100 million residence hall and student center.

Maine Law Dean Leigh Saufley said the combined graduate and law building will allow students to better access a cross-disciplinary education. It also would replace the current Maine Law building, which in 2017 was named one of the eight ugliest university buildings in the country by Architectural Digest magazine.

As far as the timeline for the center, Saufley said the university is in the design phase and "my hope is in a couple of years we will see a brand-new building."

As a requirement of the gift, the system must secure $170 million in matching funds, which will be raised through private, state and federal sources. The result will be at least a $410 million total investment.

The Alfond Foundation, named for philanthropist Harold Alfond, who founded the Dexter Shoe Company and died in 2007, has a 70-year history of supporting education and, specifically, athletics in Maine. Athletic facilities named for Alfond are found on six college campuses in Maine, including UMaine's iconic ice hockey facility, opened in 1977, and its football stadium.

The foundation continued with that support by earmarking $90 million of its recent donation to UMaine System athletics – the largest single contribution for athletics at a public college in New England.

It will be distributed over a 10-year period for construction of new facilities, upgrades to existing ones, and turning the Orono campus into a destination for high school state championships and other community events.

"When student-athletes choose Maine, it's not because of the facilities now," said women's basketball coach Amy Vachon. "It's because of our people and our campus community. Now, to be able to add on that other piece where sometimes we lose that battle, will be so exciting."

UMaine athletics director Ken Ralph said the entirety of the Alfond Foundation gift will go toward facility improvements, not annual operating costs for the athletic department. It will be the massive cornerstone to a planned $110 million investment in athletic facilities on the Orono campus.

Details of the master plan will be announced soon, Ralph said.

In a Zoom conference with media, Malloy said he, Ferrini-Mundy and Ralph all agree "the need to drive gender equity as part of any investment we would be making in the athletic program at the University of Maine and that [inequity] is represented, currently, in declining facilities. And that will be addressed radically in terms of the kind of investments that will be made."

Ralph said shortly after taking over as the athletic director, he, other administrators and key executives of the Alfond Foundation toured the Orono campus and came to one hard-to-ignore conclusion.

"Quite frankly our facilities are not up to the standard of a state flagship institution," Ralph said.

"The $90 million gift for athletics will take us to new heights of excellence and equity in Division I athletics," Ferrini-Mundy said in the media conference. "There will be facilities on this campus that will rival any across the nation. We anticipate drawing tens of thousands of people to the Maine's flagship university."