Under New Proposal, Century-Old Structures to Be Razed 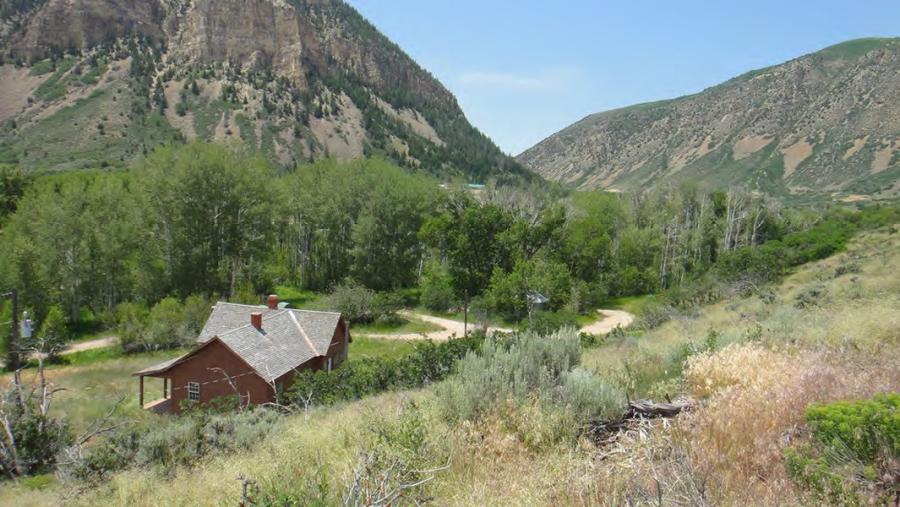 SALT LAKE CITY (AP) Lacking the resources to properly maintain all of its historic properties, the Ashley National Forest is proposing to get rid of its two oldest structures, both dating back nearly to the birth of the U.S. Forest Service more than a century ago.

The deteriorating, rodent-infested Indian Canyon Ranger Station, along with its outbuildings, are to be razed, under the proposal posted earlier in Septmber and that was open for public comment through Oct. 23. And the Stockmore Ranger Station, nestled on the Duchesne River confluence with its West Fork near Hanna, would be sold to the highest bidder without restriction.

The Forest Service hasn't had a use for these facilities in years and their locations aren't well suited for the Ashley's popular cabin rental program, according to Duchesne District Ranger Kristy Groves.

Located just outside the forest boundary on State Route 35 where the road to the Grandview Trailhead meets the highway, the Stockmore station "helps portray the significance of early Forest Service administrative sites and how they helped the fledgling Forest Service manage broad swaths of public lands," according to the proposal.

Named for a fake town established at this location as part of suspected land fraud, it served as the headquarters for Ashley's Hanna and Granddaddy districts.

"In the past we reached out to organizations to see if they wanted to use it as a scout camp. The conditions of the buildings are in disrepair," Groves said. "It's a hazard for employees to enter because of hantavirus (transmitted through rodents). It is an odd place for a rental cabin because it's surrounded by private homes."

Both ranger stations, added to the National Register of Historic Places in 1999, were built a few years after President Theodore Roosevelt established the Ashley National Forest in 1908, according to Cory Jensen, an architectural historian with the Utah State Historic Preservation Office.

"(The Forest Service) didn't get into a broader building program until the Civilian Conservation Corps helped build ranger stations during the Great Depression of the 1930s," said Jensen, who wrote the National Register nominations for the two sites. "Both are completely different in their design because they didn't have a standard plan."

At the time of its construction in 1914, the Indian Canyon Station was in the Uinta National Forest and it soon became a vital outpost. Forest ranger Fred Johnson lived in the three-room building and used the property as a base to manage national forest lands from Anthro Mountain to Indian Canyon, according to the Forest Service decommissioning proposal.

As Utah's road network improved, the station's usefulness dwindled. By 1950, it was no longer used as a summer headquarters and the building hasn't been used at all for 50 years, although its pastures remained in use for several more years.

The Forest Service resisted calls for demolishing the station because of its historic importance, yet put little effort into maintaining its structures even after the site was listed on the National Register. Flooding following the 2012 Church Camp Fire destroyed the station's barn. After decades of "benign neglect," the station's surviving buildings would require a complete rebuild to be preserved.

"Its roof is collapsing (and) the floors are collapsing," Groves said. "It is a safety hazard. People keep trying to break in there."

The Stockmore station is in better shape and officials hope a new owner will preserve its main single-story crossing structure and the bunkhouse. The station's wood frame and drop siding construction rests on a foundation of fieldstone and mortar. Wood shingles, with their original distinctive green paint, cover the gable ends. Other than an addition off the rear and some interior modifications, "the building appears probably much as it did during the historic period."

Preservation had once been a goal for the Stockmore station. An agreement was reached with the Tabiona Natural History Society to manage the property as a visitor center and museum back in the early 2000s. The group installed a new roof and repaired the foundation, but the funds never materialized to realize these plans and the society went defunct, according to the Forest Service.

"Because the buildings and land no longer have an active use by the Forest Service, the land and buildings would best be managed as private property," the proposal states. The Ashley National Forest team reviewed several options for the ranger station, and decided an unrestricted sale offers the best hope for saving the historic site.

Still, no restrictions would be placed on how the building would be used.

The Forest Service holds an 80-acre parcel straddling the highway. It would sell the 26 acres south of the road, and retain the acreage and newer facilities, known as the Tabiona Field Station, on the north side.

The property has not been appraised, but its sale is expected to generate a decent windfall that the Forest Service will use to shore up other historic properties in the Ashley National Forest, according to Groves.