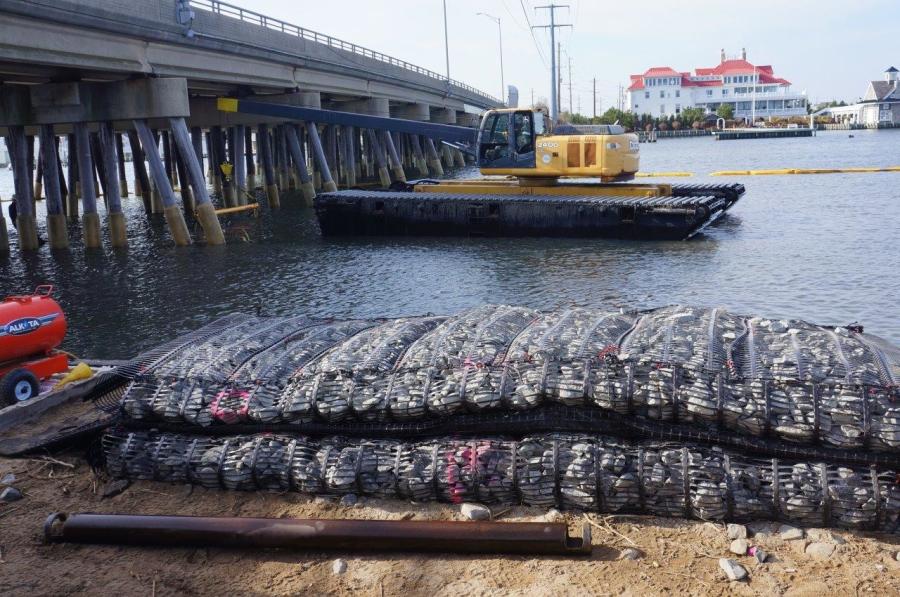 The low overhead height wouldn’t allow a normal excavator to have sufficient clearance to carry the bag in and place it in the shallow water.

For Long Reach High Reach (LRHR LLC) and Ransome Equipment Sales, customer calls for specialty job applications are a common and welcome part of the job.

“This is one of the great challenges that Ransome likes — to solve customer's problems,” said Percy Ransome, who owns both companies.

One of the recent calls Ransome received was from Schiavone Contracting in Savaucus, N.J., to assist with a job that involved working underneath the bridges and approaches to Long Beach Island.

“The problem was that the water was too shallow for a barge and too deep for an excavator and awkward to get to,” Ransome said. “The answer, of course, was an amphibious excavator, often termed a marsh buggy, that could go in and help place rip rap in wire gabion baskets.”

One of the other problems was the low overhead height which wouldn't allow a normal excavator to have sufficient clearance to carry the bag in and place it in the shallow water. To solve this problem, Ransome contacted Ted Faxon of Wickberg Marine Contracting in Belford, N.J.

Earlier in the year, Wickberg Marine had purchased some pontoons from Ransome to modify a John Deere 240 into an amphibious excavator with a 60-ft. (18 m)-long reach. One of the selling points for Wickberg to buy a unit from Ransome was Ransome's offer that he could get two or three months of rental income for this machine on a yearly basis.

“After being contacted, Faxon went down and visited with the folks on the job site and came up with a solution to clear the low overhead problem,” Ransome said. “Wickberg Marine fabricated a boom with a cable winch that projected forward from the marsh buggy under the bridge to raise and lower the bag of rip rap. This job was efficiently done through the joint cooperation of the companies.”

Wickberg Marine has been in business for 30 years, and specializes in hydraulic and mechanical dredging.

Ransome has been in the business for more than 50 years, first spending many years working at the family Caterpillar dealership. He started his own company, Ransome Equipment Sales, in 1994, and then later formed Long Reach High Reach.

“I use the combination of my past experience and my many contacts throughout the country and throughout the world to tackle the specialty job applications,” Ransome said.