University of Idaho Unveils Plans for New Arena in Moscow

The arena project has been on the drawing board for nearly 50 years. 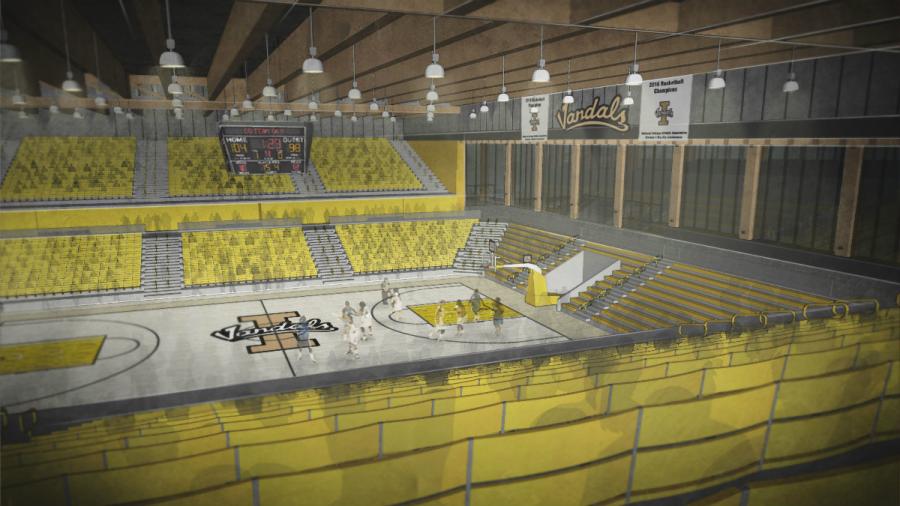 With plans for the arena to be constructed, in part, from Idaho’s natural, renewable timber resources, forest industry partners and architects have been quick to show their support to use engineered wood in the construction.

The University of Idaho unveiled plans to construct the Idaho Arena, a 4,700-seat, 70,000-sq.-ft. (6,503 sq m) athletics facility that will be home for the Vandal men's and women's basketball and volleyball teams and a university community gathering place for academic events, concerts and meetings.

Slated for construction on the north side of the ASUI-Kibbie Activity Center, the Idaho Arena has the potential to take the Vandal basketball and volleyball teams to a new level of national attention and interest. The arena will strengthen recruiting, rally fan excitement and improve the residential campus environment for students, faculty, staff and the larger university community.

“A modern, stand-alone arena puts our athletics program on a better footing in Division I athletics. It will allow us to recruit student-athletes that help us consistently contend for championships in basketball and volleyball. An adaptable facility also provides the flexibility for a wide range of other functions, including concerts, conferences and other programming for students and the community.”

The arena project has been on the drawing board for nearly 50 years. When Staben joined UI nearly three years ago, Rob Spear, UI athletic director introduced him to the project and it quickly became a presidential priority.

“After 47 years of discussion, it is so refreshing to hear Staben announce the university's commitment to construct an arena on campus,” Spear said. “The Idaho Arena will be one of the most impactful projects in the history of our athletic department.”

The Idaho Arena not only will be a home for Vandal court sports, but also a gathering space for a variety of events — including concerts, academic conferences and other student activities, to enhance student life on UI's Moscow campus. The arena also is a priority for students, with the UI student body agreeing to assess a student fee to help financially support the project.

“We have a longstanding tradition as the Associate Students of the University of Idaho in supporting new buildings and areas for students to congregate,” said Cruz Botello, ASUI president. “It's really exciting that the Idaho Arena will be for our athletics teams, as well as several programs for students.”

Plans call for the arena to be constructed using Idaho's natural, renewable wood resources. Forest industry partners and architects have shown support for the plan to use engineered wood in the construction. So far, donors have committed about $13 million of the $30 million needed to construct the arena.

For decades, home play for Vandal court sports has been in the Cowan Spectrum, a temporary venue inside the ASUI-Kibbie Activity Center. Scheduling conflicts with home football games and the Lionel Hampton Jazz Festival often force basketball to relocate to the much smaller Memorial Gym facility. The new stand-alone arena will alleviate practice and competition congestion, as well as showcase a home court for recruitment efforts.

“We have established ourselves as a premiere conference program, and the construction of the new arena is exactly what we must have to attract the student-athletes we need to springboard us to the next level of national recognition and deep runs in the NCAA Tournament,” said Jon Newlee, Vandal women's head basketball coach. “I know this type of project would not happen without the commitment, dedication and vision of all who have laid the groundwork for this to be a reality. Many thanks to all of you who have already given generously to the Arena project and for those who will join in the future.”