Faculty, staff and community members are extremely excited about the project, and its contribution to university life. 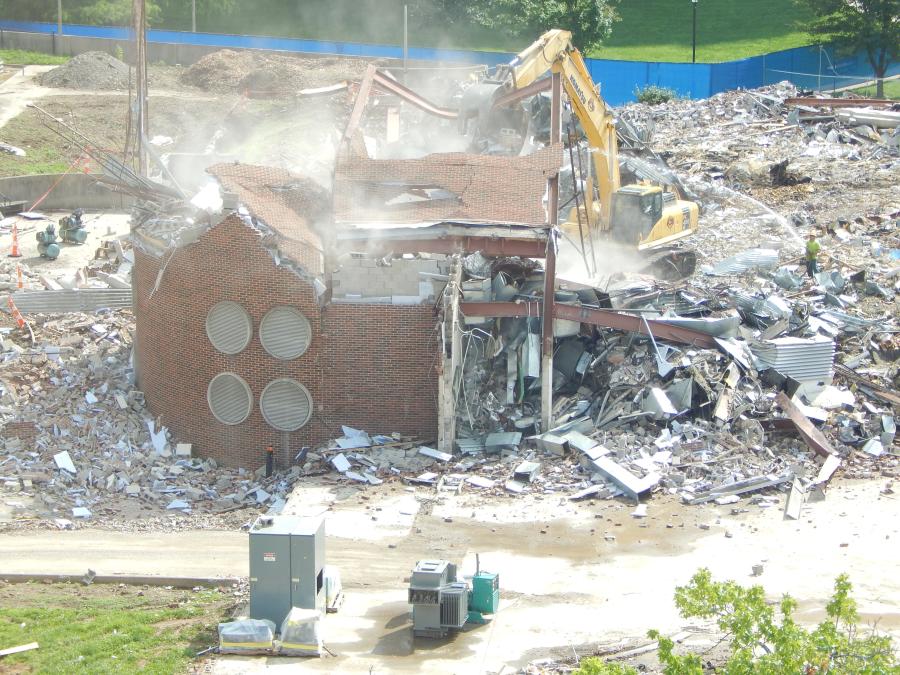 Chris Franklin photo. The 1963, the 1982 and bookstore structures were completely demolished to make room for the expansion.

For the first time in more than three decades, the University of Kentucky's student center is getting a makeover. Construction crews in Lexington have gutted a large portion of the historic structure, which provides dining, recreational and entertainment options, and houses the Center for Student Involvement and Student Government Association.

“The student center is undergoing its first renovation and expansion in over 30 years,” said John Herbst, the student center's executive director. “Planning started in spring of 2014, and the brand new facility is slated to open January 2018.

“The original student center was completed in 1938. With additions happening in 1963 and 1982, the facility we've come to know and love has exhausted its original intentions.

“The time has come to modernize and reinvent the facility for future generations of Kentucky Wildcats, and make it more energy-efficient.”

“The University of Kentucky received a $20 million gift from alumnus Carol Martin 'Bill' Gatton to assist initiating the project, the bond market was such that rates were favorable, our students were enthusiastic to support the project and all data recognizes how a sense of belonging and engagement in co-curricular life. Facilities such as the University of Kentucky student center facilitate student success and persistence.

According to Herbst students, faculty, staff and community members are extremely excited about the project, and its contribution to university life. He also said student input was extremely important.

“This project has been actively studied for over 15 years. There have been countless focus groups, two web-based surveys, two resulting demand-based business and financial plans and two in-depth steering committee planning efforts leading up to this transformation. Decisions have been based on data-driven facts and we look forward to seeing how this formulates a long range plan for continued student and community engagement.

“The trip to Texas to visit five different universities and their facilities was extremely beneficial. The steering committee was able to observe best practices in developing pragmatic use facilities, and learn from professional colleagues what they would have aspired to do better.”

The project also calls for an alumni gym renovation in an effort to blend historic with state-of-the-art training and wellness, which blends perfectly with the university ambition to increase student well-being and persistence, according to Herbst.

“There are two really big challenges on the student center project. The first is dealing with the unknowns associated with the two existing structures of the original 1938 student union building and the 1924 alumni gym. We never know what we will find when we tear into walls, and dealing with the old construction has been challenging from both a design and construction aspect. The design team must take the information the construction team finds in the field to come up with alternate designs to make the building features work.”

He said the other big challenge is working on such a large project in the middle of campus on a very small work site. As the project grows from a construction standpoint, the site becomes smaller.

“The renovation involves the complete interior construction of the student union building and the alumni gym,” said Smith. “All the walls were demolished from both structures, and new interiors will be rebuilt in each. The alumni gym actually had the old wooden structure demolished on the inside and a new steel frame was erected within the existing exterior walls.

The alumni gym renovation was a complete tear down of interiors, including old wood frame structure and concrete floors. New deep/shallow foundations and new steel structure were built within the walls of the existing exterior façade. The old roof, including wood decking, will be brought down, and a new insulated roof deck with new roofing systems and skylights will be built. The exterior façade will be restored, with new steel-framed windows installed. When complete, the old alumni gym will be the new recreational center, complete with open area cardio/strength training space, group fitness rooms, locker rooms and lounge spaces.

Work on the project began in spring of 2015. Currently, structural steel and concrete foundations work is winding down. New concrete slabs are being poured in the expansion. Interior walls are being framed in the 1938 student union building and starting to be framed in the expansion. Overhead mechanical/electrical/plumbing (MEP) rough-in is taking place where there are concrete slabs and in-wall MEP rough-in is taking place where walls are framed. Concrete stairs are being constructed at the cinema. Exterior utilities are ongoing to bring new services to the new building.

“Site utilities played a significant role at the beginning of the project,” Smith said. “Old utilities that connected north campus to central campus, but ran through the student center site, were rerouted around the site, so the buildings could be demolished and the site prepared for new construction. We could not start demolition of the existing structures to create a project site until all the existing utilities that ran through the site were rerouted around the site and back to north campus. This included steam, electric, communications and storm water. Rerouting the utilities was a significant milestone. There were several challenges, but overall that process went well.”

The metal framework has also been a major undertaking.

Decades-old changes to the original student center had to be addressed, in order to move forward with construction. The 1963, the 1982 and bookstore structures were completely demolished to make room for the expansion, according to Smith.

“Heavy track hoes, grappling claws and bulldozers were used to accomplish this. The student union building and the alumni gym had more selective demolition, with a lot of hand work with crow/ply bars, torches, skid steers and mini-track hoes with claws. All the work was preceded by a very intensive hazardous material abatement activity. This involved quarantining areas with plastic and negative air machines to remove asbestos, PCBs and hazardous materials. The abatement/demolition work took close to six months to complete,” said Smith.

As with many construction projects, weather has continued to play a role. Periods of intensive rain have hindered the project throughout the last 15 months. The project lies in the lowest elevation on campus. The site used to be a lake years ago, so rainwater and ground water are a constant battle.

Interior wall framing has yet to be carried out, along with drywall, roofing, exterior construction and interior finishes that include paint, flooring and ceilings. All work should be completed by the beginning of 2018.

An overwhelming amount of dirt/material is being moved on the high-profile project, which will total 377,000 sq. ft. (35,024 sq m), when complete. Equipment being used includes track hoes, bulldozers, dump trucks and skid steers for demolition, site excavation and utility construction. Cranes are required to erect structural steel, set concrete forms and hoist reinforcement steel, with heavy fork lifts and skid steers on site to move material and equipment.

“Schedule management has and will continue to be the most time-consuming part of our work,” Smith said.

Sustainability also will play a huge role, according to Smith. The project will be able to obtain LEED silver, when complete.

In addition, Smith said it was vital to both the designers and the university to preserve the historic significance of the student union building's Great Hall.

“The existing brick work on the 1938 building and alumni gym are being restored, and are very significant to the project,” said Smith. “It's way to blend the rich history of the student center with the new, innovative construction to create a unique, one-of-a-kind facility. This is a legacy project for the flagship university of the state of Kentucky. It is an honor to be associated with the construction.”

The design team for the new student center includes Omni Architects and Perkins+Will.

“We wanted to create the finest student center in North America that is the aspirational facility programmatically, aesthetically and functionally,” said Perkins+Will architect Jeff Stebar, AIA, LEED AP. “The new student center will be welcoming, inviting and have simple and easy way-finding. It will be full of daylight, seamlessly connected to existing campus circulation paths and provide beautiful outdoor spaces on all levels.

“It will also feature new programs including a 350-seat 'Blue Box' theater, board dining area, expanded multipurpose ballroom, fitness/recreation center and ample hang-out lounge space. Behind the scenes, the student center will be functionally efficient, with dedicated back-of-house service access to all major program areas.”

Stebar said development of the right concept for the student center's organization — one that respected the school's rich historical context and simultaneously projected the University's progressive vision for the future — was key. Other challenges included creating meaningful student involvement, and making sure stakeholder input was implemented in the design process. Technical challenges included intense underground utility issues and constraints.

For the creative team, designing a renovation/expansion project differs from new construction dramatically. Repurposing historic buildings is more complex than building new. Today's building codes are much more stringent, and require more intense structural, mechanical, electrical, and life safety systems must be carefully retrofitted into the historic shell in a way that maintains the historic nature of the original building.”

The new structure is a modern building with four levels, including the rooftop mechanical penthouse.

“We're honored to have had the unique opportunity to work with such an enlightened and visionary group of campus leaders and together create such a powerful expression of support for student life. The new student center will be the preeminent student center in North America, and we feel privileged to have been part of such a significant and meaningful project,” said Stebar.

In late August, 2016, a topping off ceremony was held to mark the placement of one of the uppermost beams atop the new student center. University president Eli Capilouto and student body president Rowan Reid were among those in attendance. Participants were able to examine the progress being made, and had the opportunity to sign the construction beam.